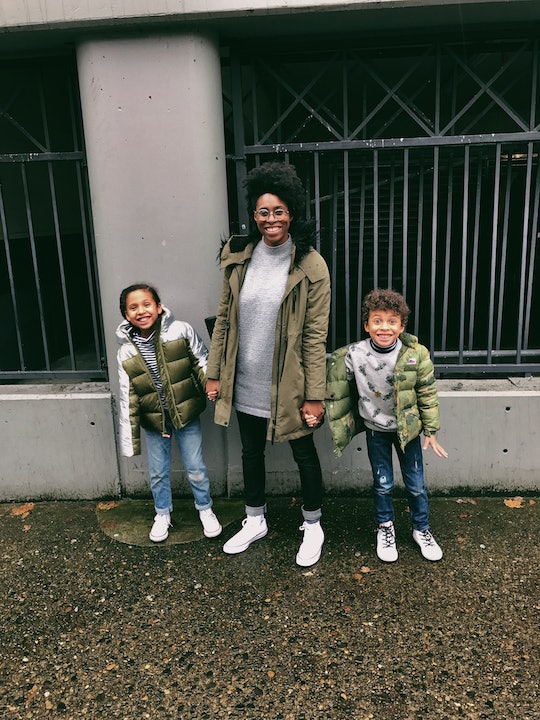 I'm A Poly Mom, & Other Parents Shame Me For It

Coming out as polyamorous was just like coming out as queer. It was who I had been all along: I just didn't realize it until I was 25 years old. I didn't come out in any formal way, and I didn't make any announcements on social media. I simply started talking more openly about my partner and the other folks I was dating.

While I am very comfortable with being open about my polyamory, I've learned that this isn't the case for a lot of my parent friends. When I have conversations about my family dynamic, I'm often met with responses that question how polyamory can be healthy for my children, or how it can be healthy for me. Almost immediately after I came out as polyamorous, I was quietly shamed for it.

I first became interested in polyamory when I was still married, when my ex-husband and I tried opening up our relationship. He was reluctant, because he fully believed in monogamy. I was giddy because I felt like the principles of non-monogamy resonated with me. After all, we have multiple friendships, multiple children, and even multiple loves over our life span. It would make sense that we could also share intimate, love relationships with other humans at once.

Instead of educating ourselves on what non-monogamous relationships looked like, however, we dove in headfirst. Our interactions with each other and the people we tried to date were messy and painful. Feelings got hurt and demands were made that were never part of our guidelines. We closed our relationship, which disappointed me because I knew that I wasn't supposed to be monogamous. So I began researching polyamory, about what it means to actually be a person who has multiple partners. I confirmed to myself that this is how I wanted and needed to do relationships.

It was important that I live my life authentically, which included sharing parts of my dating life with other people.

After learning that my ex-husband couldn't be polyamorous with me, and realizing that I couldn't be monogamous with him, we separated. We had some other underlying problems, but this one seemed to be the biggest hurdle for us. At first I questioned if this was the right choice for me, but each day I got further away from my marriage, the more comfortable I was with our decision.

When my ex-husband and I were telling our children about our separation, we mentioned that we had been dating other people. We wanted to start a conversation right off the bat about polyamory. I read about polyamory and learned that many families keep their polyamory secret, because they're afraid of what it could mean for their children and their jobs. Yet for me, it was important that I live my life authentically, which included sharing parts of my dating life with other people.

I'm not the most involved parent at my children's school, so I rarely talk about non-monogamy with my children's friends' parents. Yet I have many friends who are also parents like me, and I've told many of them that I have been exploring non-monogamy. At first, they'd kind of laugh it off, ask some questions, and then make jokes. But I assumed that eventually, they would come around to it being a part of my everyday life.

Unfortunately, that wasn't quite the case. I'd sit with a friend during a playdate talking about our relationships. Then I would mention both of my partners, and the conversation would come to a halt, followed by what felt like an interrogation.

It's incredibly frustrating when others ask how I will explain my "lifestyle" to them. "The same way that you talk to your children about your monogamous relationship," I usually say.

I slowly became accustomed to questions like: "When will this phase be over for you? Why do people want to have their cake and eat it too? Why can't you just be content with one person?" I don't mind answering those questions, nor do I mind the opportunity to educate others on alternative ways to have relationships. But I did and do mind having my relationships invalidated, simply because they don't fit into the ideal that we had all grown up with.

I wish people would realize that another person's relationship with their partner is just that — their relationship. It's not up to me to deem it invalid, or to state that their concerns aren't real. Yet I have frequently found myself defending my relationships, trying to prove their validity to those who want so badly to refute them.

It's incredibly frustrating when others ask how I will explain my "lifestyle" to my children. "The same way that you talk to your children about your monogamous relationship," I usually say. My children are well aware that my life is open for multiple people. It has given them the foundation to also build that kind of life on their own.

At times, I do worry about what the experience will be like for my children when they get older, and their peers become more aware of the fact that my children have about five parental figures: me, their dad, their dad's partner, and my two partners. While it might feel like a "normal" family to us, I know that it won't seem "normal" to those who don't understand polyamory.

I worry about children on the playground being quick to make assumptions and being cruel to them, but then I remember just how much love surrounds my children on a daily basis. Their "normal" isn't the "normal" most people experience, but they're so deeply loved and cared for that they don't think twice about it.

More Like This
71 Instagram Captions About Love, Because It's All You Need
30 Messages To Write In A Valentine's Day Card For Your Child
13 Is "Too Early" For Kids To Be On Social Media, Surgeon General Cautions
The Best Travel Tips For Solo Parenting
What Parents Are Talking About — Delivered Straight To Your Inbox