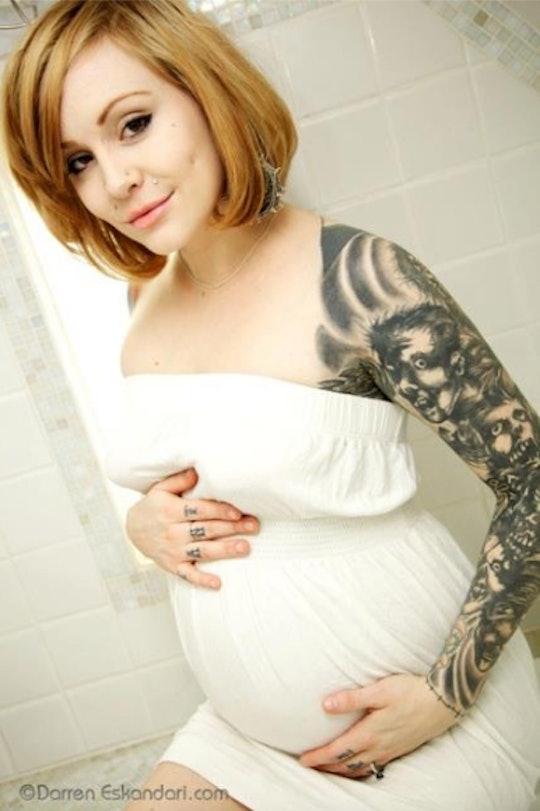 I Was Catcalled While I Was Pregnant

On a cold January morning, I went for a walk with my two large dogs. I was seven months pregnant and the exercise was welcome, but I didn't love venturing out in public with my protruding belly. I bobbed along the street, my dogs pulling at their leashes, as a car slowed down at the corner. The man was about my age, and looked eager and hopeful. As he shouted, “Hey, you’re pretty, you got a boyfriend?," I felt a familiar, sinking dread.

I was 30 years old, and I’d been living in the same Portland neighborhood for six years. I’d been catcalled and street harassed countless times. But I never imagined that I would be street harassed while I was seven months pregnant, at my most vulnerable and sensitive, while a tiny little life was growing inside me.

This guy was the first dude to catcall me while I was pregnant, but he certainly wasn’t the last. “Hey baby, you got a man?” I heard that more than once. ”Hey, you got a boyfriend?” I was catcalled during my pregnancy so often that I kept wondering: Why was my big ol’ fetus-filled belly eliciting all of this unwanted sexual inquiry?

Typically, I’m pretty quick to fight back against street harassment. I’ve been known to kick down the car doors of men who have catcalled me and followed me to the gas station, and I even have a cell phone video collection of men I’ve filmed when they dared to pester me in public.

In the interest of the safety of the growing human in my abdomen, I didn't want to anger my catcaller with a sassy retort. I was not thinking about my safety. I was prioritizing hers.

This time, however, I felt like I could barely respond. In the interest of the safety of the growing human in my abdomen, I didn't want to anger my catcaller with a sassy retort. I was not thinking about my safety. I was prioritizing hers. So instead of shouting, “Call the police,” as I had months earlier when a catcaller had followed me to the gas station, or even a simple “Hey, buddy, f**k you,” I instead stumbled over a meek, “I’m married.”

I was catcalled so often during my pregnancy that I often wondered: What, exactly, did these men think they had to gain by harassing me? What was the point of catcalling a woman who was already visibly knocked up? Biologically, don’t men want to spread their own seed, not raise someone else’s?

I don't know for sure, but I have a few theories. For starters, these cat-callers might have seen a solo, pregnant woman like myself as a potentially desperate candidate for their companionship. These guys might very well be thinking that if a woman is pregnant and single, she might be in dire economic straits, which may make her more willing to lower her standards to find a partner.

Guys hit on pregnant women because, according to a twisted, misogynistic, Beavis-and-Butthead-esque logic, pregnant chicks obviously like to f**k.

Christopher Ryan Ph.D., author of Sex at Dawn: How We Mate, Why We Stray, and What it Means for Modern Relationships, agreed that a man who catcalls a solo pregnant woman is likely doing so as a means of taking advantage of her perceived vulnerable status.

“In terms of evolutionary theory, hooking up with a woman who is already pregnant is a bad strategy, as it presumes investing in the other man's genetic offspring. If you're just talking about social forces, then I guess she's potentially in a more vulnerable state, which some men could think would be to their advantage. The whole subject [of men hitting on pregnant women] just kind of depresses me,” he told Romper. Indeed.

My second theory is a bit more simple: guys hit on pregnant women because, according to their twisted, misogynistic, Beavis-and-Butthead-esque logic, pregnant chicks obviously like to f**k. For such men, seeing a pregnant woman might be arousing because the man knows she’s DTF and willing to raise his offspring.

“It’s sort of the easiest mating calculation a male animal can make, right?,” said Jaycob Izso, a postgraduate researcher of political philosophy, a at Portland State University. “I mean, you don't have to be particularly bright to figure out that ‘pregnant female’ = ‘had sex once.’ And from there, [you can easily] make the jump that if she did it once, she would do it again.”

"[Catcallers] think that their opinion and need to express themselves so publicly is more important and acceptable than offending others."

Of course, it’s possible that many of these men don’t see their actions as sexual harassment or even a form of flirtation of any kind. In fact, according to Yvonne K. Fulbright, Ph.D., a sexuality researcher, men catcall not because they’re actually expecting to successfully pick up women, but because their male privilege has taught them that it’s an acceptable way of expressing appreciation for the female form.

“They think that their opinion and need to express themselves so publicly is more important and acceptable than offending others,” Fulbright told Men’s Health. “These lines of thinking are bolstered when important other men in their lives hold the same beliefs.”

No woman likes to be catcalled by a total stranger on the street. Most of us think that type of behavior is at best obnoxious and at worst overtly threatening, on par with sending unsolicited dick pics. But when you’re pregnant, the effect is arguably even more frightening, because it's not just your safety that feels under threat — it's also that of your unborn child. At the time, I felt like a vulnerable target who had little recourse in defending herself from unwanted contact, and I believe I was catcalled because other men saw me this way as well.

For whatever reason, having a child has made me vulnerable to unwanted sexual advances from other men.

This attention from total strangers continued after I gave birth to my daughter. For whatever reason, having a child has made me vulnerable to unwanted sexual advances from other men. After my daughter was born, for instance, a suited middle-aged man at the mall whispered, “Nice” as I breastfed her. And last year, I caught another random guy snapping a photo of us from behind in Target. I asked him to show me his gallery. He sputtered, called me a bitch, and ran away.

I've spent my entire life trying to keep myself safe from these types of men. I wear shoes that I can run in at all times. I keep my cell phone handy, and I lock my doors immediately after getting in my car. I train in a martial arts dojo with men twice my size every week. I lock my car doors immediately upon getting in, and close my curtains before dark. And I never, ever wear earphones while jogging.

Becoming a mother, however, means that you are no longer a lone soldier fighting for yourself; you are required to wear a different type of armor, one that protects your child as well as yourself. That's why I will eventually teach my daughter these same safety tips for her own self-preservation, as a way of preparing her for the inequality in our society.

I cannot completely remove cat-calling sleazebags from the world, and I cannot ensure that my daughter will forever be free from their advances. But I will gladly teach my daughter to be a “bitch,” if it means that she is safe.