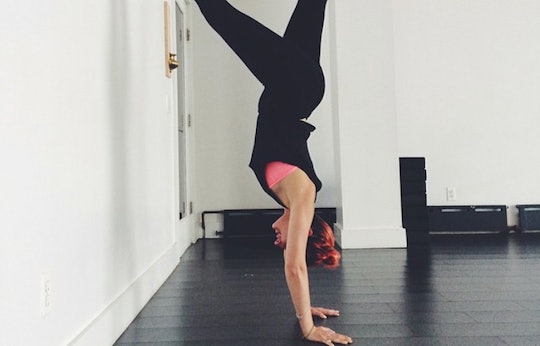 I Was Super Fit & Pregnancy Was Still A Nightmare

When I found out I was pregnant, I was teaching three yoga classes a week at a hot yoga studio. We were living in Brooklyn, N.Y., without a car and I loathed public transportation so I mostly walked anywhere that was a reasonable walking distance away. I was vegan and was mindful about the ingredients in the food I ate, drank smoothies and green juice like any other health-conscious millennial and was taking two to three yoga classes a week on top of the classes I was teaching. I was in the best physical shape I have ever been and so I thought that pregnancy was going to be a breeze. I imagined I would just carry on with my life as I grew a watermelon-sized bump under my shirt and I wouldn’t have any of the aches and pains many other women had because my body was strong and capable and if I could regularly withstand holding half-moon pose in a 90-degree room than I could do anything, right? Wrong. Despite how healthy and fit I thought I was, my pregnancy was a nightmare.

Almost immediately after my positive pregnancy test, a wave of exhaustion came over me. Some days I could barely get out of bed in the morning. I had started at a brand new job two weeks before I found out I was pregnant and needed to hide my exhaustion, as well as my bloated figure, from everyone at work. I called in sick a lot those first few weeks because I could not peel myself off the couch and if I managed to get myself in the shower, I would get so nauseous and dizzy while getting ready that I would have to lay right back down. I used every excuse in the book from asthma to the flu and even a family emergency or two. I could sense their patience with me waning but I was afraid to tell them that I was pregnant until my probationary period was over. I knew they couldn’t fire me because of my pregnancy, but I wasn’t exactly the most stellar employee at that point and I didn’t doubt that they could hold my frequent absences against me. As the days and weeks passed I slowly began to realize that I was not going to have the easy blissful pregnancy I had been imagining while trying to conceive.

I would go to class only to wind up laying on my mat because I didn’t even have to energy to stand up.

Even though I could barely hack it in my day job, I was so excited to teach yoga all through my pregnancy. I had watched so many of the women at my studio teach right up to giving birth and I thought there was nothing cuter than a big ol’ belly in yoga pants and a sports bra. I tried to continue teaching and practicing as frequently as I was pre-pregnancy but I was so goddamn tired and the heat made it ten times worse. I would go to class only to wind up laying on my mat because I didn’t even have to energy to stand up. I started to sub out a lot of my classes because the thought of being in a hot room that smelled like a mixture of sweat and incense made me gag. Physically, I was feeling awful and I started to feel pretty crappy mentally as well. I felt weak for not being able to push through the tiredness. I knew I needed to listen to my body and be sensitive to the fact that I was growing another human inside of me — which was a lot of work, sure, but I couldn’t help but feel like I was losing myself, too tired to do much of anything.

I managed to make it through the first five and a half months at work, hiding my growing bump behind bulky sweaters and then flowy dresses, without disclosing my pregnancy. Once the weather got warmer and the bump became harder to hide I came clean and it turned out they had suspected it all along so I really wasn’t fooling anybody. Then one warm day in June I was bouncing on my yoga ball at my desk when I looked down at my ankles and saw that they had swelled to the size of tree trunks. I figured I was pregnant, it was hot, and swelling was normal. I had a midwife appointment later that day so I would bring it up and she would reassure me that everything was fine.

I left work a few minutes early, walked the five blocks to my appointment, sat on the examination table and revealed my giant ankles. My midwife wrapped a blood pressure cuff around my arm, as I felt it tighten around my arm I could hear her make a little “hmmpf” noise, like she was confused about something. She told me to take a deep breath and asked if I was nervous. She took my blood pressure a second time and then told me that she wanted me to go to the emergency room, that my blood pressure was far too high and she was concerned. I called a cab and made it the few blocks to the hospital while feverishly texting my husband who worked an hour and a half away, asking him to meet me there as soon as he could.

I was no longer vegan, I gained 40 pounds, had high blood pressure and literally couldn’t walk two blocks without swelling up like a balloon, getting dizzy and having to sit down.

After a few hours of laying down in the hospital bed with the heart monitor strapped to my belly to make sure my son was okay, I was diagnosed with preeclampsia. I was originally told I was going to have to be induced a few days later, at seven months pregnant, but after seeing a high-risk doctor I was told I could wait until my due date as long as I kept my blood pressure down and both my son and I were healthy. I was told that I didn’t need to be on full bed rest but that I shouldn’t be working or doing anything but taking care of myself and my growing baby. I had stopped teaching and practicing yoga, I went on maternity leave two months early and spent the rest of my pregnancy shuffling between doctors appointments and binge watching Lost for the fourth time. Although I was so grateful that we were both healthy, I felt like I had somehow failed myself by not having the energetic, fit pregnancy I imagined. I was no longer vegan, I gained 40 pounds, had high blood pressure and literally couldn’t walk two blocks without swelling up like a balloon, getting dizzy and having to sit down. I felt like my body had betrayed me somehow, or I betrayed my body — either one.

After the nine months that felt like nine years, I was induced and my son was born two days after his due date. Now that my son is 2 years old and enough time has passed I am able to see what a tiny blip those nine months actually were in our lifetime together as mother and son. Although my pregnancy really wore me down physically, it also really affected me mentally and I am still recovering two years later. Instead of the magical, transformative experience I thought I would have, I felt weak, broken and unprepared for the changes my body went through.

Even though I may not look back on my pregnancy with fondness, I am grateful for my happy, healthy son and for what I learned about myself in the process. Although I didn’t know it at the time, I was learning my first and most important lesson about motherhood: that you can’t possibly control everything and sometimes you just need to relax and enjoy the ride. In the end it didn’t matter how healthy I was or how many green smoothies I drank or how strong I thought I was — Mother Nature was still able to kick my ass.