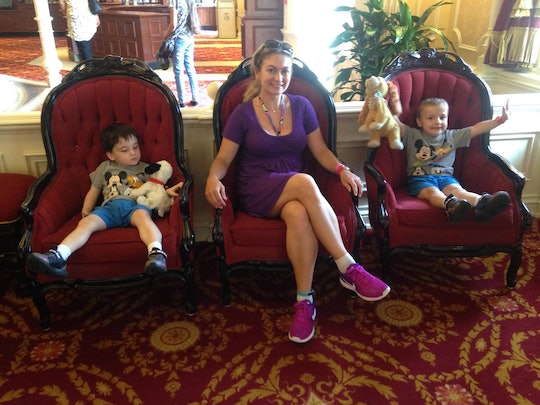 I'm addicted to the internet. As a stay-at-home mom, the ability to connect with other adults without having to put on a bra is what prevents me from losing it and having to put the boys in daycare to protect my sanity. But while I waste hours a day on social media, I'm not the type of person who uses the internet as place to vent honestly about the hard parts of parenting. The majority of the pages and people I follow are parenting pages and bloggers. I find it very comforting and reassuring when others share their honest parenting struggles online, but I've always held myself back from joining in for fear that my friends and family would label me as being over dramatic or whiny. So while I love to read honesty from other moms, when it comes to my own feeds, I self edit. I don't pretend things are better than they are — I'm not cleaning a spot among the toys before taking an Instagram photo so my floors look clean when they're not. I just try not to complain online, lest I end up getting called out as ungrateful for my family.

But I've always admired those who just put it all out there honestly online, and I've wondered if doing so would help me feel less frustrated and supported by my friends and family during my more difficult parent moments. So when my editor challenged me to get real about motherhood on social media for a week, I was game. It would be a good way to push myself outside my comfort zone and see if my online community was as supportive as I'd hoped.

This is what my social media posts typically look like:

If they're talking about me or my kids, they're typically silly or self-deprecating. Otherwise it's a lot of memes about PSLs and Harry Potter, because I'm a nerdy New Englander and I own it. So while I didn't spend this experiment going full blown emo all over the internet, for me to open up at all about my mental state or how my kids are acting up is a big step outside the norm for me, and I was sure people would notice.

Day 1: Too Much Family Time

I posted this on the last day of our family vacation to Florida. While the trip was fun, one of my sons suffered an injury mid-trip, causing us to make a detour to the hospital for a few days so he could have surgery. He's doing great now but the incident was scary and delayed our departure. I thought some people might think it was pretty annoying that someone who has the means to go on vacation in the first place would then complain about said vacation, but no one called me out for being a privileged brat. In fact, my status got 11 likes, breaking the coveted 10-like barrier, so so far, so good.

The only way to get the self-care I need is to speak up for myself loudly and clearly.

Day 2: Seeking Someone Who Understands 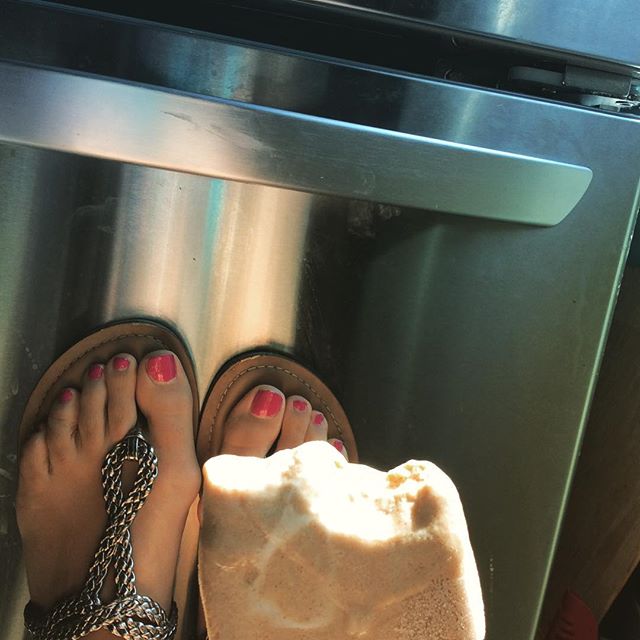 ‌ I posted this picture on Instagram with the caption,

Hiding from the kids in my dirty kitchen with an ice cream bc if one more person pulls my hair today I will lose it.

It got seven likes, which, considering I only have 56 followers, isn't awful. But it seemed people were more excited over the fact that I was having ice cream in the middle of the day than anything else (except for my bestie, who commented on the fact that I was allowing my toes to see the light of the day, since I dislike them and tend to spare others from being subjected to them). No one commented on the fact that my kids were driving me to the breaking point. And I wasn't kidding. All they want to do lately is play with my hair. While it's sweet, it's also painful, to the point where I'm seriously considering chopping it to my chin. But then I watch the Formation performance from the VMAs again and see Bey in all her hair-whipping glory and want to keep in long again, so...

On the one hand, I was glad that no one was saying I was a bad parent for not cherishing every single moment I had with my babies. However, it was really kind of upsetting that no one seemed to realize how much I was struggling.

At this point I was still pretty optimist about this whole endeavor. To be honest, I'm my own worst critic. Because of that I probably fear that other people are judging me based on my parenting skills far more harshly than they actually are, but I was hopeful that this experiment would prove me wrong.

Day 3: Admitting When I Need A Break

I barely admit that I need a break to myself and therefore I'd never say it on social media, but sometimes leaving my kids for an hour-long exercise class is the highlight of my day. Having two 3-year-olds boys is a lot of fun, but it's also exhausting. After a long family vacation, I was more than ready for some alone time and when it was finally time to leave for Zumba I practically sprinted out the door.

Typically I'd never post anything like this for fear that someone would accuse me of not cherishing every moment I have with my kids. I was surprised that a couple people actually liked the tweet and someone even replied with encouraging words about how important it is for moms to take time for themselves. Feeling supported like that, even by someone I don't know well, actually made me enjoy my workout even more. I had zero guilt about taking time away from my kids when I knew that other moms did it too, and better yet, high-fived my decision to do the same. I came back from class drenched in sweat and much more chill.

Some of my closest friends and family members would like my statuses, but never actually took the time to follow up with a text or phone call to see if I was doing alright.

I love watching videos of other people's kids online, but I rarely post my own, both because I'm always worried about being the annoying woman with kids who's also an oversharer and also because I never know where my phone is, and by the time I find it, whatever cute thing the kids were doing has now progressed to a chokehold and I have to intervene. But since this was the week for being really honest about motherhood, and I just happened to have my phone handy, I grabbed a video of Remy doing his latest annoying habit: singing "Let It Go" all the time. We didn't have much to do while we were in the hospital, so we watched Frozen eight times, not including the replays of the musical numbers. The boys have been obsessed ever since. It was cute at first, but now I want to throw a snowman.

More people liked the video and commented on it than I thought, and while no one seemed to agree with me that his rendition needed work, it was nice to be acknowledged. Rather than agreeing with me that his warbling was, in fact, annoying, my friend without kids told me his song selection could have been worse, and my friend with her own toddler terror told me I was lucky to get a live concert from my backseat.

Basically, it seemed like people thought it was cute and not as annoying as I'd feared, and if they did think it was a case of me oversharing, at least they kept their comments to themselves. I'm not going to start chronicling their every bowel movement via Facebook, but maybe I don't need to censor myself quite so much, especially when it comes to the fun stuff.

Day 5: This Is Me, Struggling‌

As the week went on I realized that the entire experiment was pretty much a bust because no one was really reacting to any of my posts in terms of checking on me or offering any encouragement. This was both a relief and depressing. On the one hand, I was glad that no one was saying I was a bad parent for not cherishing every single moment I had with my babies. However, it was really kind of upsetting that no one seemed to realize how much I was struggling. Some of my closest friends and family members would like my statuses, but never actually took the time to follow up with a text or phone call to see if I was doing alright. These statuses were well outside of my usually online fodder about Justin Bieber or cake, and yet no one was concerned for me. The most engagement and concern I received on any of my posts this week came from strangers on Twitter. That made me feel pretty crappy.

One of my worst fears as a mom is that motherhood is overshadowing my personal identity, and that who I am as a person doesn't matter now that I have kids.

I posted this after a really hard afternoon with the boys and once again, it felt like no one really cared. But when I posted a photo to Instagram of gluten-free paleo muffins, it got all the likes. The implication here felt really clear to me: Less b*tching, more baking, because my so-called friends and followers don't really want to know how I'm feeling.

But on the last day of the experiment, I realized something really interesting. Throughout this week of being real on social media, I was also way more in tune to the things my friends were posting. I'd realized that I was much more likely to reach out with an "R U OK?" text than I'd ever been before, because I'd rather hear that they're fine and just needed to vent than that find out too late that they were really upset and needed someone. Seeing how upset I was over the lack of concern my friends and family made over my posts made me realize that I'm not in the best place right now and that I could benefit from some stress-reducing activities like more yoga and solo time or maybe talking to someone, professional or otherwise. But I know now that the only way to get the self-care I need is to speak up for myself loudly and clearly. It sucks, because when you have anxiety or depressive tendencies being assertive can feel like you're being bossy or demanding, but when it comes to your mental health and well-being, dropping hints won't cut it.

Honestly, opening up about my parenting frustrations on social media didn't make me feel better this week. If anything, it only affirmed my fears that people don't want to hear about other people's problems.

One of my worst fears as a mom is that motherhood is overshadowing my personal identity, and that who I am as a person doesn't matter now that I have kids. It's that feeling that creeps up when you travel to visit friends and family and everyone's all excited to see the baby or kids and it feels like they wouldn't miss you if you weren't there at all. This is what it felt like to be honest about motherhood on social media. Being real about my feelings garnered mostly crickets as a response. It's the funny posts about my kids and the things that they do and say that are what people actually react to. And this entire week felt like a harsh lesson in learning that as a mom, I'm not as valued to people as I'd hoped.