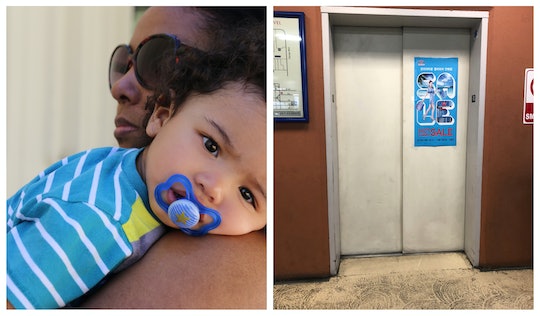 I Was Trapped In An Elevator With My Baby, & It Was Traumatic

Last week, I lived out every mom's nightmare when I got stuck in an elevator with my toddler on a 95-degree day in Los Angeles. I've always been afraid of elevators — it's an enclosed space, I worry the doors won't open, insert your specific fear here — and, well, I'm here to tell you it's as bad as you imagine.

For the record, the advice from the professionals is to "stay safe, stay put" in the event of an elevator jam. But that doesn't mean you'll feel OK about being trapped in a metal cell. I already suffer from anxiety though I haven't had many anxiety attacks since starting medication. When I get anxious, I tend to feel hot and my breathing becomes labored.

On a particularly unlucky Friday, this was exacerbated by the fact that it was a parking lot elevator with no air conditioning. Ever wondered what it is like to be stuck in an elevator for an extended period with your child, your husband, and two elderly women? Let me walk you through it.

I didn't want to get on that elevator. I've been to that particular mall before and we usually park at the very top of the parking structure, since the store we were visiting is on the top floor. When we got in, I felt strange. I wouldn't say it was a psychic moment, but perhaps it was my intuition flashing red. Or maybe I felt afraid because veering from our usual thing always makes me feel weird. Either way, I entered the elevator behind my husband, who was pushing the stroller with our toddler son in it. A bunch of people got off on another floor, and we moved closer to the doors, knowing our floor was next. Then the elevator stopped.

Once I realized that the elevator had stopped and the lit-up button was frozen, I looked at my husband with fear in my eyes. "Bry, is the elevator stuck?" I said. He looked at me as if I was jumping to conclusions, and assured me it would open in a few seconds. It didn't.

I began to hit the 'door open' button over and over.

I looked down at my son in his stroller and began to panic internally. Then I looked over at the two elderly women who were looking worried themselves. I looked over to Bry again, who was starting to look concerned. I felt my breathing become labored. I began to hit the "door open" button over and over.

One of the nice ladies, who I later found out was named Grace, pushed the emergency button. A person answered and asked if we were the same people who'd called 10 minutes ago! Yes, we found out another person or group of people had been stuck possibly right before we entered the elevator! Oddly enough, this gave me hope.

If the other people were stuck right before us, then they got out without some kind of intervention from emergency personnel, right? At least that's what I thought. My husband put his arm around me and assured me everything would be OK. I relaxed a little and pulled out my phone to find a video for my son to watch to keep him calm.

Bry pushed the emergency button again. The same person answered, and Bry reminded her that we were stuck and had a baby and two older people trapped inside with us. She assured us help was on the way. By then, it was starting to get really hot in the elevator. I asked Bry if he brought his water bottle, realizing I had left mine in the car. On hot summer days in Los Angeles, we always brought our water bottles with us. For some reason, we'd both forgotten our water, which really never happens. That's when I remembered I had my little hand-held fan in my backpack purse. I dropped my bag to the floor, pulled out my fan and pointed it at Kai. He was watching TV on my phone.

I started to cry. Bry was starting to get upset, but was calm. I suspect he was doing that for the baby and me. He noticed that the elevator seemed to be stuck between floors. He tried to move the elevator doors, working to push and pull them open. Nothing seemed to work and all it did was shake the elevator. Then we heard someone trying to pull the doors open from the outside. Finally, help had come! I felt hopeful and stopped crying.

After a few minutes of the person struggling with the elevator door from the outside, I panicked again. Tears fell from my eyes when Bry reminded me to keep it together for Kai. I looked down at him and he was no longer looking at my phone but fixating on me. He looked worried, fearful, confused. Keep it together, Angie! I told myself. The more fragile of the elderly women was standing there with her shopping cart, hunched over. I turned my mini fan around and pointed it at her. She told me to keep the fan on the baby.

Grace, sounding upset, said, "It's getting hotter! I can't breathe!" and took a series of deep breaths. She was still holding her full shopping bags. Her forehead was wet. There was no real ventilation. I kept pulling up my shirt and didn't care that I was showing my stomach. I held the fan on Grace. "Keep the baby cool," she insisted again.

After 30 minutes of entrapment, I'd texted my best friend and called my aunt, who was at home with my three older daughters, to tell her where we were and what was going on. My oldest daughter happened to overhear the conversation and ran off to tell her younger sisters, upset. I reassured her over the phone that everything would be OK but I didn't know when we'd get out. She sounded sad.

I had already unbuttoned his shirt, taken off his shoes and socks, and was five seconds from taking his shorts off.

My son then turned around too fast in his stroller, not being fully strapped in (my mistake) and hit his head on the side bar. He became hysterical — more so because he started to realize how upset everyone around him was. I picked him up and comforted him.

I had already unbuttoned his shirt, taken off his shoes and socks, and was five seconds from taking his shorts off. Then the elevator floor button reset. It showed weird symbols then the actual floor number again, P3.

The elevator began to move!

Once the elevator began to move, I picked up Kai again and put him on my hip. The doors opened and I ran out with Kai, yelling back to Bry to "grab the stroller!" I may have laughed at this thought, but I was afraid the doors would close and then our stroller, along with my purse, would then be stuck! I ran out and away, and we all hugged and cried, thankful to finally be out of that hot "deathtrap." If I wasn't claustrophobic before, I certainly was now.

I cried for a good few minutes, and kissed my husband and baby multiple times. There was no one from security waiting outside for us, so Bry propped a red cone in front of the elevator then set off for the office with Grace and her friend. I took Kai to sit next to the fountain in the middle of the mall, splashing the water on his little feet. He giggled, as he finds water funny. I called my mom to let her know what happened and to tell her I loved her.

I've heard stories of friends, family and acquaintances getting stuck in elevators and some may think it's not a big deal, but I had my baby in there. It was hot. Would I then have blamed myself if something had happened to him? I'm not sure what the temperature got up to in that elevator, but it was not nothing. Moms get a hard rap for worrying about everything, and carrying five sippy cups in their purse at all times, but this day taught me that you can never be too prepared.