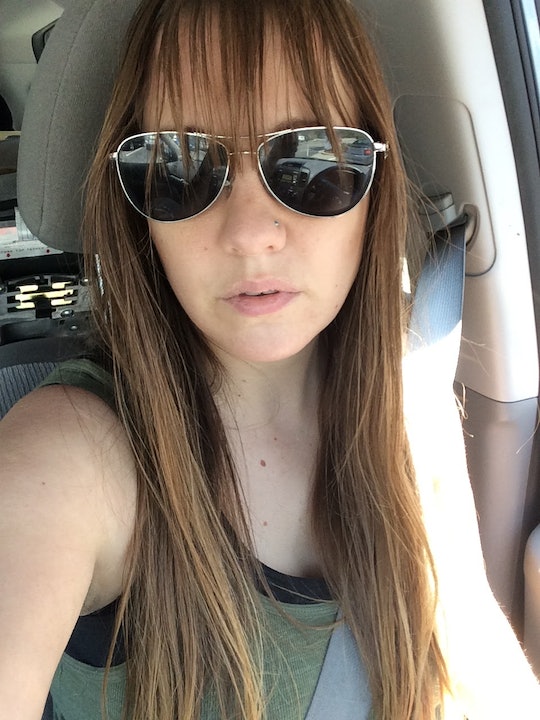 I love my hair. When I was a kid, my mom kept my hair short and my sister’s long, and I envied those long, luscious blond locks. I’ve spent all my adulthood pining for her length and fussing over products for shine, sleekness, straightness, and softness. Now that I have the hair I’ve always dreamed of, I plunk down an exorbitant amount of cash every month on it mane. Even though I shell out an unsightly amount of money every four weeks to take care of my hair, I'm fully aware that all these products are probably hurting my hair rather than helping it. I've heard of friends and the Internet alike tout the benefits of washing hair with just apple cider vinegar and honey and I was tempted to try it.

Over the years, the chemical additives in my products have slowly started to worry me. My glossing cream alone is a five (a “moderate carcinogen”) on the Skin Deep Cosmetics Database, and I use it daily. I have friends who’ve sworn that if you stop shampooing your hair, you’ll go through a month of grease, and then emerge triumphant with commercial-worthy locks. You just have to ditch every harsh chemical, put up with lots of grease, and suck it up for a while. It’s called “no poo,” and it’s supposed to be fab. Needless to say, I was intrigued.

Because I couldn’t resist the promise of perfect hair, I stowed away my Fekkai and did my research. Most people start with a baking soda wash (you rub baking soda into your scalp several times a week, followed by an apple cider vinegar (ACV) rinse). I read that the alkaline baking soda can cause hair damage, so I opted for honey instead, a common and more gentle alternative.

I found out quickly that no poo is basically a chemistry experiment happening on your head. So I mixed honey and water, “washed,” rinsed with apple cider vinegar, and waited patiently for the magic to happen.

I set my honey and my apple cider vinegar on my shower shelf: the honey in an old shampoo bottle and ACV in an enormous jug. I felt like a cut-rate mad scientist, but for hair. It was hard not to get the mixture of honey and water everywhere, though I luckily poured it in the shower.

As for the apple cider vinegar? Well, this was all-tears kind of conditioner. It tasted like BBQ sauce on my lips, which was both good and horrible. But once it dried, my smelled like honey, not ACV, and it didn’t feel clean — at all.

The morning after, I found my hair frizzy with a greasy scalp to boot. I used some coconut oil to moisturize my arid ends and my hair turned into a stringy greaseball. I pulled it up that day, and the next, which was when I realized that I had to shower with the honey concoction every day or my hair looked greasy and stringy and felt extra dirty. My oldest son noted, post-shower, that I smelled like vinegar. He’s 5. Thanks, kid.

On days four and five, I had to put oil on the super dry ends of my hair again because I just felt like I was a total grease ball. I was happy to be using all-natural hair cleaners, but I really wanted this stage to end. I might’ve been clean, but my hair wasn’t. I realized that this experiment just might produce a zen-like detachment to my appearance. It felt good to use natural products on my hair. But damn, did it look bad.

I couldn’t take it anymore: the grease, the stringiness, the general feeling I was developing 1920s-inspired slicked back hair. I felt self-conscious all the time. My hair was in danger of leaving grease marks. Hair damage be damned, because I needed something stronger.

So I went "mainstream no poo" on day six. I clumped up some baking soda and grittily scrubbed, rinsing, as usual, with some apple cider vinegar, or what was quickly becoming known as the most vital ingredient to my personal stockade of hair BBQ sauce. “Wow,” my husband said. “It looks like you washed your hair.” I felt elated at that someone had noticed. I also wondered if this was what I should've been doing all along? The baking soda was helping pull out the grease that I felt had been bogging down my hair and the ACV was helping to deep clean and rid the toxins. But it just felt like too much mixing and too much science to do every morning in order to make sure my hair looked good.

No poo tenets recommend waiting three to five days between washing your hair, so I used baking soda as dry shampoo on the in-between days and regained a semi-human look.

But I could only manage two days in between washes. I’d decided I couldn’t live with the stringy lankness anymore and I caved in. I was disappointed, of course, but nothing was worse than walking around with a head of hair that felt entirely dirty and disgusting. I was dealing with Severus Snape-like locks, and even though I am a huge Harry Potter fan, I didn't want a Potions 'do to match my love for Hogwarts. My friends and husband said my hair looked fine, though a little stringy, but inside, I was going crazy.

I normally used super-expensive conditioner and keep my hair smooth incredibly smooth and sleek. I adore my hair. It's part of what makes me feel like me. I’m used to keeping it shiny, shapely, and gorgeous. Now I was living with grease all day, everyday, and no matter what I did, I couldn’t get used to it. Even when I would rinse, nothing helped. I'd add more of my DIY dry shampoo mix and still, nothing. It felt like there was no solution. I could stand under the shower head for hours and still wouldn't have clean hair to match the rest of my body. Maybe hair is a materialistic thing to care about, but at this point, I didn't care. I couldn't wait for this experiment to be over.

A month is a long time no matter how you say it — but it’s especially long when you’re trying to make it 30 days without washing your hair. Since I had my own version of a toddler meltdown, I tried to right my no-poo wrongs. I looked up dry-shampoo recipes, and finally settled on one that I thought could help keep up with the amount of grease my hair was producing daily. If I could just get past the awful greasy stage, maybe things would perk up. I didn’t have any arrowroot (which the recipe calls for) so I used baby powder and cocoa powder instead.

I mixed it by hand, pinched up a lump, and rubbed it on my bangs. It absorbed the grease, all right. It also looked like Granny forgot to color her gray. I worked it harder onto my scalp. Eventually, it mostly faded in, and I powdered the rest of my part. This made my hair less greasy for about three hours. I was elated. No one else noticed.

I had a solution! I could now make it to three or so days between washings. After four and five days without a wash, even if it only lasted for a few hours, I could tame the grease with a little homemade mixture of my own. It didn’t help much with the stringiness, of course, but the powder mixture kept my roots dryish. Score. I wasn’t worried that left my bathroom with a fine sprinkling of cocoa powder; I’d have to clean that up later.

At this point, I couldn’t see a difference in my hair. It was as stringy and greasy after as ever, but with seemingly more breakage than before this experiment started. It felt brittle. Maybe this is the hump, I thought. Maybe this is the as bad as it gets. I even felt hopeful in the midst of the grease. Then two days later, the wash seemed not as greasy as usual. Maybe I was turning a corner? It took three days for me to wash my hair again, and by then, it wasn’t as bad as it had been. I used dry shampoo on my bangs. My husband watched. “What if it rains?” he asked, teasing all the concoctions I'd created to solve the grease problem taking shape on my head. “Do you melt chocolate?”

Finally, I was able to make it four to five days between washes, only pulling up my hair on the last day. It wasn’t appreciably less stringy, but the top of my head still felt really greasy. It was an endless unclean feeling, but I was learning not care. The zen-like detachment was beginning. I started to separate who I was from who my hair said I was. I put my emphasis into other aspects of my look. I got dressed, I wore sunglasses, I did things that made me feel good. I tried to think of anything but my hair all day long. Even though friends said it looked fine, I knew better. It didn’t feel fine.

On day 26, a day after washing my hair, it still felt clean. It was, however, super dry, so I put almond oil on it. (I was my own personal haircare apothecary.) The grease layer started where my hair met my head, but a friend — the type you can trust to tell you the truth — said you’d see it only if you were looking. I felt semi-elated and semi-disappointed. It wasn’t quite what I wanted to hear. By the last day, the grease layer remained, but my hair looked and felt decent. It was beginning to get shiny. I didn’t care. I was sick of the Ovaltine shampoo, sick of the stringiness, and sick of the grease.

On day 31, I jumped in a hot shower and shared some intimate moments with my chemical-laden Fekkai. The shampoo tingled on my scalp. It dried into my normal, limp hair, with shine, sleekness, and all things lovely. I regretted nothing.

I wish I could have kept up with the no poo plan, but it was just too much grease for far too long. When your kid’s telling you that you smell like vinegar and your friends are lying through your teeth about it, it’s time to let it go. More than anything, though, was the fact that I was sick of having sweaty-looking hair all day, every day. The no-poo magic just didn’t happen for me. Maybe it was in the works. Maybe if I’d ridden it out for another two weeks -- or another month I’d have had model-like hair. Maybe if I’d been willing to try X or Y or some other kind of chemistry experiment, I’d have made it through the stringiness and onto the other side. I guess I will never know.

I realized that I don't have to feel guilty about loving the products that I do — or even about using them. It's my hair. As long as I'm not forcing anyone into thinking that they're wrong for choosing something that very clearly works for them, I shouldn't have to hold myself accountable to do anything I don't want to do either. I like my hair, and the products I use to maintain it.

More Like This
Bright & Festive Nails To Rock On July 4th
Meet Your New Favorite Blazer(s)
Considering Getting A Tattoo While Pregnant? Here’s What To Know
This Dog Food Company Is Using Unusual Ingredients To Create Healthier Treats For Your Pup & The Environment