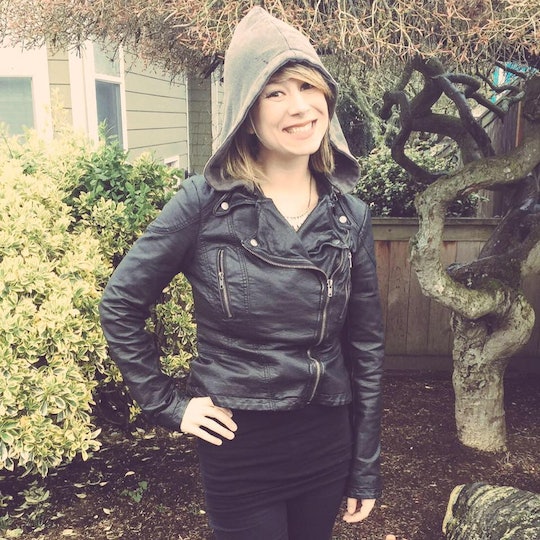 I Wasn't My Rapist's Type, Either

He showed me a picture of his ex-girlfriend once. I remember thinking she was beautiful, her shoulder-length hair falling effortlessly over half of her makeup-free, girl-next-door face. I didn't think much of her, aside from the fact that she was the former girlfriend of a male acquaintance. But years later, as I clutched the exam table paper in both hands and stared at the ceiling while a sexual-assault nurse examiner administered an hours-long rape kit, all I could see was her face. I didn't look anything like her. I wasn't my rapist's type. But there I was, feeling a cotton swab collect what I hoped would be evidence of him inside me; enough evidence to prove that despite not being his type, I was, apparently, the victim type.

I thought about her again — her smile, her dainty features, her free-flowing hair — when well-known Elle columnist E. Jean Carroll recently accused President Donald Trump of allegedly raping her in the mid-'90s, in the dressing room of Bergdorf Goodman. In an excerpt from her book What Do We Need Men For? A Modest Proposal published in The Cut, she recalls, with pained detail, the three minutes she alleges took place: Trump allegedly pushing her against a wall, kissing her without her permission, pulling down her tights, and inserting himself partly — or entirely — inside of her. She then explains other instances of assault, harassment, and abuse she alleges occurred throughout her life at the hands of many men, and details the reasons she waited this long to come forward with her allegations against Trump:

Receiving death threats, being driven from my home, being dismissed, being dragged through the mud, and joining the 15 women who’ve come forward with credible stories about how the man grabbed, badgered, belittled, mauled, molested, and assaulted them, only to see the man turn it around, deny, threaten, and attack them, never sounded like much fun. Also, I am a coward.

And, of course, she was right. Trump emphatically denied Carroll's allegation, telling The Hill, "Number 1, she's not my type. Number 2, it never happened. It never happened, OK?"

This isn't the first time the president of the United States has been accused of rape (currently, 16 women, including Carroll, have alleged Trump either harassed, assaulted, or raped them, as The Daily Beast notes), nor is it the first time he has insinuated that his accuser was simply too ugly for him to violate — just not his type.

It is a means of establishing control over another person by violating them physically and psychologically, the kind of violence engendering trauma that often lasts a lifetime.

During a campaign event in 2016, then-presidential candidate Trump said Jessica Leeds was lying when she alleged he put his hands up her skirt while on an airplane. "That would not be my first choice," he said, the crowd laughing in response, as The Daily Beast reported at the time. "Check out her Facebook, you'll understand."

I've often wondered why an acquaintance — someone I considered to be funny, relatively kind, easy to joke around with and talk to — would target me on what should have been a celebratory but ultimately uneventful evening. I've wondered what it was about me that made him kiss me without permission, in front of other friends and coworkers, laughing as I pushed away. I've stared at myself in the mirror — my face inches away from the glass — in desperate search of the part of me responsible for the night he pinned me down on that godforsaken bed.

I'm still searching, years later, and in the light of rationality I know I will never find the part of me I can blame — it doesn't exist. Being a "type," let alone the "type" of a serial abuser, has nothing to do with why he chose me; why he violated me. Being "conventionally attractive" has nothing to do with rape.

“Sexual violence has nothing to do with attractiveness," Verena Salvi, a professor at Columbia University and trauma therapist practicing in New York City, tells me. "It has everything to do with an exaggerated sense of entitlement and a desire to feel powerful at the expense of someone else."

Our stories rest heavily on everyone, and even those who hear us and see us and believe us are tired of carrying the weight of it.

Jaslin Kaur, a fellow survivor and state organizer with Know Your IX, agrees, saying it's a need for power that causes rape — a violent act rooted in patriarchal norms. "It is a means of establishing control over another person by violating them physically and psychologically, the kind of violence engendering trauma that often lasts a lifetime," she says. "Shame and stigma, two more elements of patriarchy, unfortunately invisibilize and silence survivors while serving to protect perpetrators, maintaining that system of power."

And while I've heard some variation of this before — from friends, family members, counselors, psychologists, the voice in my head that gets louder when I'm in the presence of other sexual assault survivors — the president's most recent comments work to undo not only my understanding of my rape, but this country's understanding of the epidemic of sexual and gender-based violence.

"Trump is leading the public into dangerous thinking that only conventionally attractive women who dress a certain way are raped because their looks invite sexual attention," Kaur tells me. "Trump used a misguided, false, and violently misogynistic excuse to cover up yet another accusation in a trial of stories that are increasingly difficult to read."

Trump's "not my type" response threatens to undermine the truthful, trauma-informed support advocates have worked to provide survivors for generations, Kaur says — support I lean on when I'm at my most vulnerable. Support that keeps me from blaming myself.

"The comment 'she is not my type' epitomizes the toxicity of rape culture," Salvi says, "where women are objectified and valued based on their appearances, to such extent that their looks alone can be used to deflect culpability."

Salvi hopes the strength of Carroll's voice "will dim the invalidation of any response that seeks to silence and shame survivors of sexual violence.”

In my darkest moments, when the years that have removed me from my trauma disappear and that night grips me with the same amount of force he did, I still ask myself, "Why me?"

Maybe she spent hours searching the details of her face, too. Maybe she was desperate to uncover a reason why he chose her, too.

When I hear the president of the United States fail to denounce sexual assault but, instead, insinuate that abusing someone is a question of attraction, I eye that mirror and wonder if there's something fundamentally wrong with me that I have simply missed; some innate flaw I've yet to uncover.

When a rape allegation against a sitting president is underreported (The New York Times ran the allegation in their Books section, and the paper's executive editor later admitted, on Monday, that they had "underplayed the article"), and is, instead, swept under the current of a relentless news cycle, I feel the sheer pointlessness of it all: in the end, it doesn't matter. Our stories rest heavily on everyone, and even those who hear us and see us and believe us are tired of carrying the weight of it.

And in those fleeting moments of relative calm that occur before I manage to successfully lull myself to sleep, I can still see his ex-girlfriend's face, who, I later learned, also accused him of sexual assault and, like me, was unable to bring him to justice. I fixate on how different we look, allowing the perplexity of it all to push me towards the only comfort I can enjoy on days like today: unconsciousness.

Maybe she spent hours searching the details of her face, too. Maybe she was desperate to uncover a reason why he chose her, too.

Maybe she wasn't his type, either.

Maybe he was just the type of guy that rapes women.