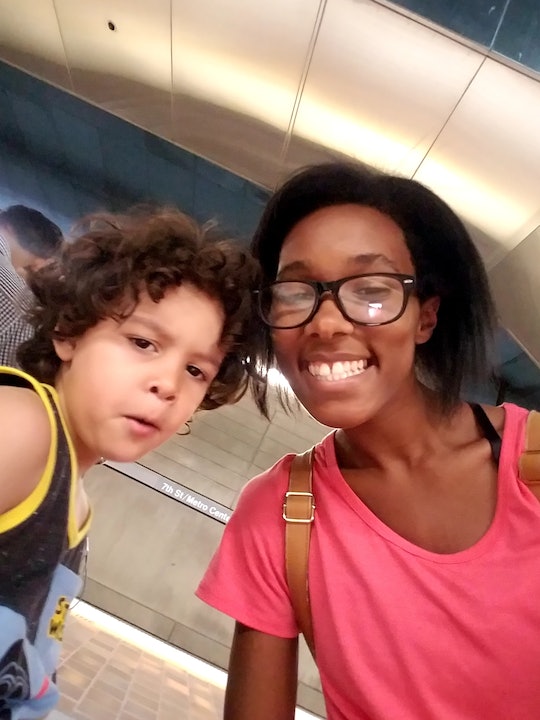 I've been nursing my son around the clock for almost four years — and I. Am. Exhausted. We co-sleep, and he still nurses several times during the night. (Honestly, I stopped counting how many times he nurses, because I know it would make me even more tired to think about it.) I can't exactly pinpoint the triggers for him: thirst, hunger, the need to relax, or usually all of the above. But as he’s gotten older, he’s gotten bigger and more physically aggressive in his need to access the boob, and I have had enough.

I'm done with nursing in general; I miss my body being mine and mine alone. But I was especially ready to night wean because I knew it was going to be a harder habit to break. A friend who is also an lactation consultant had initially suggested that I talk to him about stopping nursing, but I knew that talking would be too abstract for my son. I knew that I was going to have to go cold turkey. I had been hesitant to do so in the past because I was afraid of creating unnecessary stress or trauma for him by taking away his biggest source of comfort, but I knew in my heart that we were both ready.

On the first night, we did our usual bedtime routine of a bath and putting on pajamas. But instead of letting my son curl up in my lap and nurse, I kept my bra on and told him that we were going to lie down and listen to some music. It was hot and we don’t have an air conditioner, so I told him that mommy was too hot for him to be in my lap. I found a Spotify playlist of mellow music, turned off the light, and let him lie down on my pillow. Mainly, I just sat next to him while I played Candy Crush on my phone. He was tired, so he fell asleep in about 15 minutes. Phase one was complete.

I found a Spotify playlist of mellow music, turned off the light, and let him lie down on my pillow.

The first time he stirred was about 3 hours after he fell asleep. He tried to claw his way into my shirt, but I simply crossed my arms over my chest and told him very firmly, “NO.” He whined and protested a bit, but I didn’t give in. When he stirred again, I repeated, “NO.” He whimpered and then just rolled over. "You're OK," I said to him as I rubbed his back.

The final time he stirred, I was already awake, so when I said “no," he woke up and stayed up. "But I'm sleepy," he said, hoping that I would give in and nurse him so he could get back to sleep. But I stayed firm. I felt surprisingly calm about it. I knew that I was doing the right thing.

The second night was similar to the first, which was to be expected. I think he thought that maybe the first night was a fluke. He is nothing if not persistent. He went rooting and I said, “NO.” He whimpered and stuck a hand in between my breasts and went back to sleep.

Things started to change the third night. He didn’t even bother trying to root. He just cuddled close and threw a leg or arm over me.

By the fourth night, he didn’t even need to cuddle me to get back to sleep. He just rolled over and passed out.

I was surprised at how easy cold turkey weaning was for us. I think that I underestimated how ready my son was to wean. Because he was previously reluctant, I thought that it was going to be impossible to get him off the boob. It’s been a little over a week since he stopped trying to nurse during the night, and he’s pretty good at putting himself to sleep.

I found that creating a routine has been helpful for soothing him. If he is stirring a lot, I just place a hand firmly on his back, and he can mellow out. Even though I still wake up during the night (I don’t think I’ll ever sleep through the night again), I find that without nursing it’s easier for me to go back to sleep as well. We’re both sleeping a lot better, which was my ultimate goal. I feel refreshed when I wake up and overall a lot happier. It might not have been easy, but it was time.