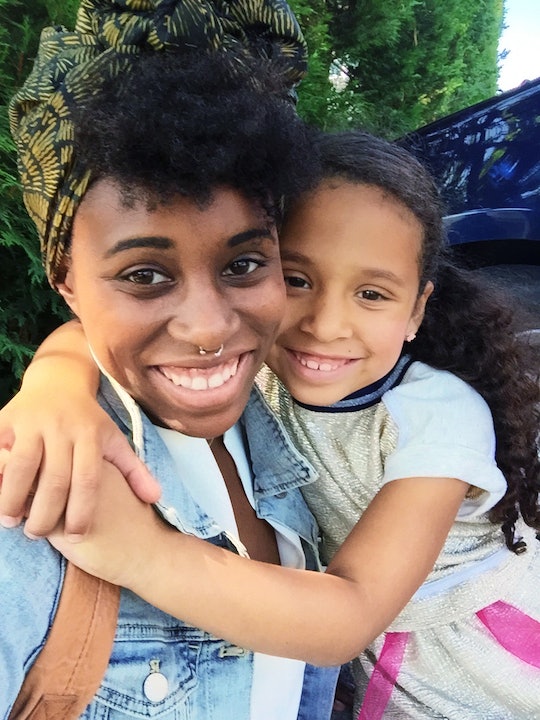 I Went A Week Without Saying "Sorry," & This Is What Happened

I am constantly apologizing to people. I have no qualms with owning up to a mistake, or causing an accident, yet I’ve realized I’ve been saying sorry for things I shouldn’t have to. When a man comes barreling down the sidewalk towards me, and should clearly move, I say sorry, and move for him. When someone squeezes past me in a group, without so much as an "excuse me," I say I’m sorry, even though it’s not my fault. I thought it was just me, but I’ve noticed that many other women doing it too, apologizing for things even though they’ve done nothing wrong. I’ve never seen a man do this, though. Not once. Which got me thinking: Why am I always the one who's sorry? Why am I always the one who's in the way?

I decided to watch the women and men around me, observing the difference in how both parties behave, both when people are watching and when they think they aren’t. I noticed men feel absolutely comfortable with taking up as much space as they needed, or frankly just wanted, while the women around them tried to shrink themselves, accommodating everyone but themselves.

It looked, and felt, absolutely ridiculous. If these women were making themselves smaller — literally and figuratively — than I was guilty of doing the same. And TBH, I was tired as hell of saying sorry for things I didn’t do wrong. So, I decided to stop.

I wanted to explore what it would feel like if I stopped apologizing for incidents that I shouldn’t. I gave myself two weeks. Of course I would say I was sorry if I bumped into someone, or if I needed someone to move, but I was no longer going to offer up an excuse just because its what was expected. What I was used to doing. I was curious to see if I could break a cycle in myself, if I could change the way I’ve been taught to be as a woman. At first, it took everything in me not to say, “I’m sorry!” I was so conditioned to saying it, and even beyond that: I was so conditioned to believing I needed to say it.

So what would happen when I stopped?

I Was Using “Sorry” As A Crutch

It was important to me that I attempted to unlearn something I’ve felt I’d been conditioned to do as a woman: to apologize. I wanted to kick the habit of always feeling like I should be sorry for something, without even being aware of why I’m apologizing. So, the first place I ventured to was the big bookstore in my town. It’s never not crowded, no matter when you go, and I figured I’d have ample opportunity to test my un-apologetic skills.

Walking through the narrow aisles and attempting to reach books around people made me acutely aware of just how often I say “I’m sorry.” But I caught myself anytime I felt it rising up inside of me, and  reminded myself that I wanted to be intentional with my apologies. I was hyper aware that I didn’t owe anyone, especially men, anything that wasn’t earned. So I reached for the books and moved throughout the aisles with ease and more confidence. I didn’t apologize unless I did something that warranted it. I remembered that I belonged right where I was.

I Learned That I’ve Earned My Spot

Part two of this experiment was a stage I like to call Hold Your Ground. I realized throughout this week that apologizing wasn’t just something I was doing verbally. Moving out of the way and slinking out of conversations or situations was also a means of apologizing, even if I wasn’t saying it outright. So I focused on not apologizing in action, too.

If there was man walking down the street in my direction, I didn’t move, and I didn’t apologize for it, either. And when I stopped apologizing for basically existing, something surprising happened: men started apologizing to me. When I didn’t offer any sort of consolation as they attempted to cut in front of me, and when I didn’t remove myself from their path as they walked down the street, they mumbled, “I’m sorry,” as they rushed past. They noticed me. I noticed myself becoming more comfortable taking up room, and the boost of confidence I got from being seen made me less afraid of stepping on their toes.

At a concert, when a man decided to stand in front of me, and I couldn’t see the band. I told him it was rude, and he needed to move. He was surprised, but he moved. He heard me, and he reacted. It’s hard to put words to exactly what this meant to me, but I walked out of this week feeling more empowered than ever.

I Learned When, And Where, I Feel The Need To Be “Sorry”

At the beginning of this experiment, I had a loose idea of the instances and situations in which I’d need to stop saying “I’m sorry” without truly realizing I’d also need to work on that at home. It wasn’t something I struggled with in regards to my children, but it was something I noticed I said often around my partner.

I realized that when I wanted to share my feelings, or even my thoughts on a topic, I’d begin with an apology, or end with one, as if what I was saying didn’t belong in the conversation. (“I’m sorry to interrupt, but..” and “That’s just what I think, sorry.”) Apologizing like that made it seem as if I’d done something wrong when really I hadn’t at all. I began to wonder why, even within my intimate, personal conversations, I felt this “need to appease”.

But this week, I chose to stop apologizing in my personal, intimate spaces. I reminded myself that those closest to me want to hear what I have to say, even if they don’t always agree. They don’t need me to think for them, and they don’t ever assume that my words come without value. During a conversation I had with my partner recently, instead of my usual, “I’m sorry I feel this way!” I proudly announced “This is how I feel, and I’m not going to be sorry about it. I don’t have to be sorry about it, because my feelings on this matter are not wrong.” He agreed.

A week of being aware of the instances in which I apologize at home didn’t mean I was “cured” from apologizing, but it did make me think of the type of example I’m setting for my daughter and my son. I don’t want them to see their mom apologizing for her opinion, and I definitely don’t want them to feel like differing points of view are something that warrants an apology.

Why Was Being Sorry Such A Natural Reaction For Me?

My need to apologize for where I stood and what I said was a habit. It was natural; a part of me. I don’t think it's rooted in me being polite or considerate, but I’ve learned that it is rooted in the idea that women are “inferior,” and even if we don’t actually believe this ideology, we still fall prey to it. It’s rooted in thinking that a woman’s actions are “impolite” and “rude” if she sways from the norm, so I’m expected to apologize for my behavior every time I step out of line.

I seem to apologize for the little bit of space I take up on the subway; I apologize whenever I ask someone for something; I apologize for the times others need to walk past us. This week, I noticed just how rare it is for men to apologize for these things. They definitely don’t think it’s inconsiderate to share their thoughts or opinions, and they definitely don’t think twice about stepping past you when you’re walking too slow or taking too low to pick the book you want to read in a packed bookstore. Our society is still stuck on gender stereotypes that encourage women to shrink themselves, while men only make themselves larger. Sometimes we don’t even notice it as we’re doing it.

Because of this, I made sure to add a ton of self-reflection into my week of not saying sorry, too. I wanted to be aware of the gender stereotypes that surround me and the ones that affect me. Even if not being able to change the ways I communicate and apologize wouldn’t happen overnight, it still felt like a really awesome step toward eliminating it entirely.

Was It Easy To Stop Being “Sorry” All The Time?

Ultimately, throughout this process, I’ve felt more empowered and more empowered as a woman. Now I’m actively fighting the patriarchy. It’s not just that, though, I was slowly changing the way I saw myself, therefore also changing how people view me. I’ve also begun to notice instances when my daughter says I’m sorry because she feels like she has to, not because she actually means it. I could wonder where she learned this behavior from, but I know she’s watched me do it countless times. I want her to have the confidence to exist without feeling like she doesn’t belong, or that her existence is in some way an inconvenience to another person.

Sharing any bit of who I am, including my body, is not an inconvenience, and I need to stop giving people the space to even think that it is or could be. I’ll never, ever again, apologize for sharing space or my thoughts with another person, both for the betterment of myself and for my kids. I want my apologies to have intent behind them; to have purpose and meaning. I don’t like that I’ve simply been saying “sorry” all this time just to say it. I matter. I have value. And I’m going to act like it.