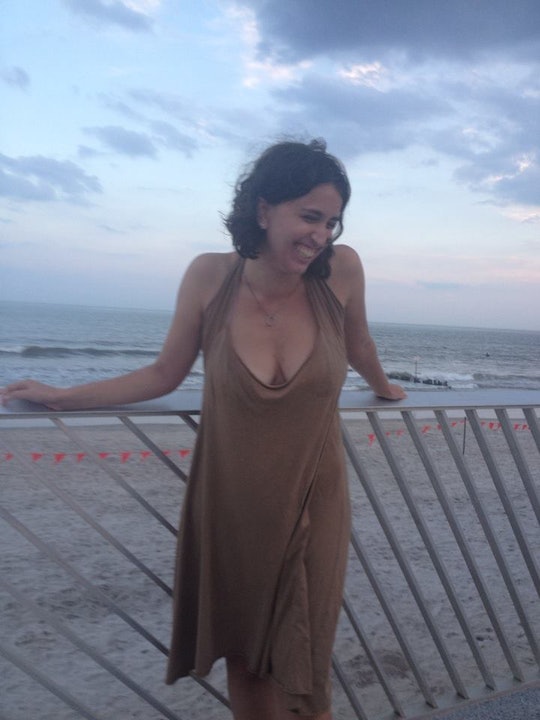 I Went Braless For A Week & Here's What Happened

I'm a 38D. Before my pregnancy four years ago, I was a C-cup; once I got knocked up, I became a D-cup and that was the end of that. But here’s the thing: I hate bras. I find it nearly impossible to find one that fits me properly. If I simply must wear one, I usually opt for sports bras. I don’t feel especially “supported” when I wear a bra, and all the research I've read indicates that bras don’t prevent sagging. As far as I’m concerned, bras are most important for one thing: keeping my nipples from poking through my shirt.

I decided to just go braless for a week. What the heck: It’s winter, and we’re all wearing seven layers on our bodies anyway, so it's not like anyone would notice. Also, I work from home most of the time, so I wouldn’t have to do that much differently. (If you think I wear a bra while I’m sitting on the couch with my laptop, you’ve got another think coming.)

That said, I have evening activities almost every day, though, and each one required its own mental calibration regarding the possible risks of going braless. But I also have done a fair amount of burlesque, so it's wasn't like most of my friends hadn't seen my breasts already. When I thought about it, I determined that there were very few situations in my life in which a lack of bra had a significant chance of backfiring.

Here’s how going au naturel worked out for me.

That Monday night, I went to see a friend’s play reading near my apartment. I sat by myself in the audience and I’m pretty sure no one noticed my nipples. All the major socializing and congratulating my friend was done before and after the actual reading, once all of my layers were back on. Going braless was like having a little secret that only I knew.

On Tuesday, I taught a playwriting class. Because I was in front of an audience, this was the only time all week that I did feel self-conscious about my breasts. I had worn two shirts under my sweater (both for warmth and for nipple blockage), but even though the classroom was warm, I decided to keep my sweater on. It wasn’t so warm that I was suffocating, and life went on.

I taught an online student and went to therapy. I teach my online students via Google Hangouts, and the camera stops somewhere around my collarbone, so the presence of a bra was unimportant. When I went to therapy, my sweater did come off; however, since I tend to lie on my stomach during therapy, it didn’t really matter. I didn’t think about my breasts. (I don’t think my therapist did either.)

I spent most of the time thinking about how nice it was not to have underwire digging into my ribcage.

On Thursday, I went to a writers' group meeting. The conference room was cold and so the sweater stayed on. Nipples remained checked. Life marched forward. Later that night, I met up with a friend for drinks and dinner. I did take my sweater off at the restaurant. My nipples may have been doing things; I don’t know. We had chicken and waffles to think about.

On Friday, I taught another online student and a friend came over. I wore my boyfriend’s oversized olive green button-up, which does some kind of magic and somehow manages to hide my 38Ds. I didn’t think about my breasts. Later, I went to a rehearsal for a ten-minute play I’d written. I spent most of the time thinking about how nice it was not to have underwire digging into my ribcage.

I saw my best friend’s play and went out afterwards for Mexican food and milkshakes. My sweater stayed on all night because pretty much everywhere we went was drafty. It was raining outside, so I guess there was the potential for wet clothes + no bra shenanigans, but I had an umbrella and a raincoat and several layers.

I went to an event where my ten-minute play was being performed. Apparently, the most notable thing about my appearance was my second-hand fur coat. Everyone who hugged me when I got there said, “You’re so fuzzy and soft!” Yet no one seemed to notice my lack of a bra.

While I was already fairly prone to going braless, this experiment has made me wonder why I ever wear one at all. Sometimes, for aesthetic reasons, or simply so I won’t have to think about whether someone will notice, I’ll sure I’ll still throw on a sports bra. And for special occasions I will occasionally bust out the underwire. But for now, to my breasts I say: run free, my beauties! Run free!