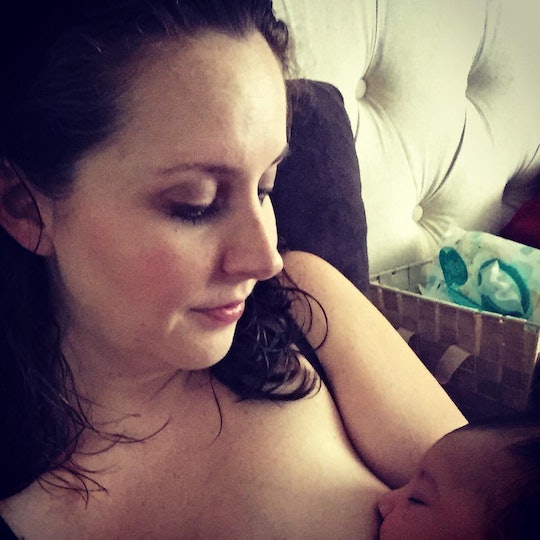 I Lost My Supply Overnight, & It Was A Nightmare

Like many nursing moms, I struggled with supply issues that made breastfeeding close to impossible. But unlike many women, I didn't have to deal with undersupply. Instead, my breasts produced so much milk that I was in constant pain and my babies had difficulty feeding. I had oversupply, and it was so bad that it made me want to quit breastfeeding.

With my firstborn, I was an anxious mess waiting for my milk to come in. In preparation for breastfeeding, I read as much as possible on the topic, a lot of which centered on tips and tricks for handling undersupply. I was convinced that when my milk arrived, it wouldn’t be enough. But I couldn’t have been more wrong.

When we got home from the hospital, I remember worrying out loud to my husband and wondering when my boobs would make the switch from producing colostrum to liquid gold. At the start of that conversation, my breasts were normal. I am not exaggerating when I say that literally five minutes later, they were full-blown torpedo boobs. By the end of the day, my boobs had grown two to three sizes, and they were rock-hard. The pain was breathtaking.

Our baby was sleeping, and I didn't want to wait for her to wake up to drain my breasts. I turned to my husband in a panic, and he in turn helped me fumble with my electronic breast pump. I’d never used one before and I was clueless as to how to go about it, as was my dear spouse, who immediately turned it on full blast. (Pro-tip: never do that right away. It hurts like hell.)

Within minutes, I had nearly filled the 4-ounce bottle with milk. The relief was instantaneous, but it didn’t last long. An hour later, I was completely engorged again and leaking everywhere. This time I was able to nurse my daughter, but my letdown was so fierce that she started to choke. I had to unlatch her and hand-express some milk before putting her back on the breast, which caused her her to scream bloody murder.

Then suddenly, out of nowhere, my left breast deflated. Literally. It went from looking like a cantaloupe to a shriveled-up balloon.

I was relieved my milk had come in, but my anxiety didn’t ease up. Based on Google searches and Facebook crowdsourcing, my supply should have slowed down within a few days to match my daughter’s feeding schedule. But it just seemed to keep growing. I was feeding my daughter 10-12 times a day and pumping upwards of 20 ounces a day just to relieve the pressure.

I knew I should lay off the pumping because of the law of supply and demand: the more I fed and pumped, the more my breasts would produce. But I couldn’t stand the pain between feedings. I tried putting icepacks on my breasts and taking Tylenol to reduce the discomfort, but to no avail. Pumping between feedings seemed like my only recourse. Within two weeks, my freezer was so full of milk that we couldn’t open it, lest we get pummeled with frozen bricks of milk. We even stopped buying frozen foods because we simply didn’t have the room to put them anywhere.

Then suddenly, out of nowhere, my left breast deflated. Literally. It went from looking like a cantaloupe to a shriveled-up balloon. And I couldn’t get a drop of milk out of it.

To say I panicked would be the world’s biggest understatement. I was so confused: how did this even happen? Did it mean I would have to stop nursing? Would my boob ever look normal again? I was a lopsided, emotional mess.

From surfing web forums, I could see that it wasn't uncommon for milk supply to dry up seemingly overnight, usually due to external factors like stress. I'd also heard that it was common for women to have one breast that produced more than the other, either due to natural anatomical differences or to baby preferring to nurse on one side. Yet I'd never heard of one boob deflating, full stop.

To say I panicked would be the world’s biggest understatement.

I reached out to several lactation consultants, none of whom had ever seen a rogue tit like mine. Nobody could give me an explanation. My sobs were met with the repeated refrain of “let me do some research and get back to you.” In the meantime, I continued to put my daughter to my deflated breast and pump it, per their advice, in an attempt to revive the supply. I also tried Fenugreek supplements, dark beer, and prayers.

After a few days, my breast began to re-inflate and produce again. But the cycle repeated itself a few times during the first six months of breastfeeding. While the lactation consultants were unable to figure out why, my OB-GYN suggested that I had overproduced so much so fast, that my breast was simply overextended. Why it only happened to the left side remains a mystery.

Luckily, the final months of breastfeeding were uneventful: there were no more deflating boobs and significantly less engorgement. In total, I survived 12 months of nursing my daughter.

By the time I gave birth to my second child, I figured I had a handle on breastfeeding. But again, I was dead wrong.

Just as it did the first time, my milk came in fast and furious. It was incredibly painful and more intense this time, and it didn’t help that my son wanted to eat every 45 minutes around the clock for his first three weeks of life. He demanded and boy, did I supply. I was worried I would get mastitis, because my ducts were constantly full and often clogged. It looked like I had peas under my skin. I was so engorged that it felt like my breasts were going to explode. And it made latching difficult for my son; even if I hand-expressed first, I simply had too much milk. He would choke and gasp the first several seconds of each feeding.

Of course, the upside was that he was growing like a weed. I delighted in knowing I was helping my baby thrive, but I still cried at every feeding; breastfeeding might be natural, but it felt like it was anything but. The pain, constant leaking, and anxiety over being away from my baby or breast pump for more than two hours lest I explode often overshadowed the joy associated with breastfeeding.

Breastfeeding is not an easy journey for many women, and for me, it was something of an emotional roller coaster; I went from producing too much to being terrified that I wasn't producing enough to producing way too much all over again. Nonetheless, I persisted with both of my kids, and I’m grateful. I was able to nourish my babies, and there's no better feeling than that. Besides, in the process I discovered my superhero power: producing breast milk. Now I'm just waiting for Marvel to create a superhero comic based on me.