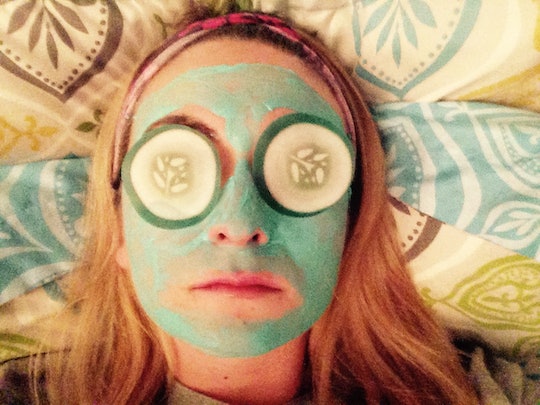 Combine stressed-out parents who went to bed too late, two preschoolers with colds who woke up far too early, and a shortage of K-cups in the house, and you get two things: an epic marital blowout, and a mom who decides to go on strike. A couple of weeks ago, those exact circumstances led to my partner and I having one of our rare arguments over breakfast. I can't even remember what set it off (though the lack of caffeine probably had a lot to do with it), but the next thing I knew my partner was complaining that the house was messy and insinuating that I should be doing more to keep it clean.

Before we had children, when both worked full time outside the home, my partner and I were a team. We cooked together, did laundry together, and spent Sunday afternoon cleaning the house together. But since I became a stay-at-home mom, most of the household chores, meal planning, and preparation have become my responsibility, in addition to taking care of the kids while he's at work. On top of that, I also work part-time from home as a freelance writer.

I try my hardest to maintain the household, feed us healthy meals, and keep the kids alive and happy, and my partner's failure to see how hard I was working to keep everything afloat really stung. Later that morning, when I got an email from my editor asking if anyone was interested in seeing what it would be like to go on a mom strike, it felt like destiny was calling me.

For an entire work week, I completely abandoned my usual duties as a stay-at-home parent to my kids. I refrained from cleaning, crafting, and cooking (except when I was the only one home alone with the kids and it was time for them to eat). During the day when I was home with the boys, I kept them safe and played with them, but when my partner was home I left full parenting responsibilities in his hands. Trust me, the house not being clean was the least of their worries.

My day usually consists of watching the kids while my partner showers and gets ready for work and then throwing on a pair of clean yoga pants for myself and brushing my teeth. If I'm lucky, I get a chance to splash some water on my face. Then we head downstairs where I unload the dishwasher, make my partner's lunch, and the kids' breakfasts, all before feeding myself. I then spend the day watching the kids and trying to keep the house tidy while my partner is at work. If he gets home early enough, I'll run upstairs to get some work done for an hour before coming down to make dinner. Once the kids are in bed, it's time for more work, a workout, then bed.

I felt fantastic, and he felt miserable.

To say things were different when I went on strike is putting it mildly. I got up and did my hair and makeup while letting my partner figure out how to keep the boys entertained while he got ready for work. Then I went downstairs and made myself a coffee and breakfast and sat down to eat eggs that were actually hot for a change. My partner managed to get the kids and himself fed, but left for work without packing himself a lunch because he ran out of time. I felt fantastic, and he felt miserable.

Instead of asking the boys to clean up their toys and eventually cleaning them up myself, I let the mess pile up all day long. I didn't perform my usual rituals of wiping down the table after meals or sweeping up the crumbs. I let the Play-Doh crumbs fall where they may. It was pretty relaxing on my part, and when my partner got home, I admit that I was a little to happy to see his face fall when I asked him what he had planned for dinner. I knew he wasn't thrilled to have to make pasta right after coming home, but I was determined to stick to my guns and remain on strike.

After dinner, I went upstairs to work and indulged in some spa time while he put the kids to bed. Although I knew I was trying to prove a point, the alone time was a nice change. I'll admit that I was sad to miss out on the boys' bedtime rituals, so I cheated by going in to read them a bedtime story.

I slept really well that night, but there was some serious resentment coming at me from the other side of the bed.

Day two was more of the same, and I have to admit that it's not only my partner who likes a clean house. Even though our floors may not be spotless and the number of toy bins we have in the living room gives us away as a home inhabited by kids, I like to think that I keep things relatively organized for having twin 3 year olds. Every toy has a place and with me on strike, that place is currently on the floor.

The urge to pick up was strong, and I felt like I was wasting the day by sitting on the couch when I could be dusting or organizing puzzle pieces. I realize that despite what my partner may have said during our argument, there is a lot I do around the house and my contributions to our home may not be financial, but that doesn't mean they don't have value.

Later that night my partner confessed that he had thought I was being lazy in not always folding the laundry, but that he now realized how hard it was to do with the kids around.

Even the kids seemed unsure about the "new way" things were going. They loved the fact that I wasn't nagging them to clean up after themselves, but they seemed to think it was weird that I was spending so much time sitting still. I hate to admit it, but it was only day two and I was already bored.

My partner was home for most of the day on day four, so while I lazed about playing Candy Crush, he took it upon himself to tackle the laundry that needed to be folded. Getting the clothes into the washer and dryer has never been a problem for us, it's getting them folded and back in the drawers that's the trouble. Our kids like to dump out the baskets and play dress up in the clothes or knock over piles of folded items. It's frustrating and makes the chore take three times longer than it should.

To his credit, my partner tried to enlist the kids' help, and for a time, it worked. They happily handed him items of clothes one by one to fold. He was smug and I was impressed, until the boys started playing tug of war with a sheet and knocked over half of the folded laundry on the table. Since this has happened to me many a time before, my instinct was to jump up and help, because I know how frustrating this is when it happens, but I stayed true to the strike and did nothing.

This experiment opened my eyes to the fact that I'm not the only adult in this house, and that raising kids with someone means being able to count on them for help too.

Later that night my partner confessed that he had thought I was being lazy in not always folding the laundry, but that he now realized how hard it was to do with the kids around. While I appreciated that he was finally starting to see things from my perspective, I hated the fact that I didn't help him fold the clothes. I realized that we hadn't been been fully working together and we both could now see that this to change.

I really thought that by the end of the week the house would look like a scene out of a disaster movie, but to be honest, my partner had picked up the slack quite well. Sure, we'd had take-out twice this week (so far) and I would've mopped up whatever that pale stain in the hallway was by now, but in general, he's handling the extra work without complaint.

Sometimes I get so stressed out over all the things that need to get done around the house and I internalize this long list as reasons why I'm not succeeding as a mother. However, this experiment opened my eyes to the fact that I'm not the only adult in this house, and that raising kids with someone means being able to count on them for help too. It's OK for me to turn to him and ask him to take care of some things, and asking for help doesn't mean I'm not pulling my own weight, it just means that we're working together as a parenting team.

By now, I've realized it's all about finding balance. I didn't like sitting around doing nothing around the house all day, but I noticed that even when I do what I can to clean up, the reality is that having kids doesn't make your living room look like the ones in the glossy pages of an IKEA catalog. We're human, and sometimes we're going to have days or weeks that are busier than others, and if that means some toys get left on the floor or some crumbs get ignored, it doesn't make us awful parents.

My partner did so much to step up, and tackling the cleaning, cooking, and more parenting tasks made him see how much I do when I'm at home. At the same time, it helped me realize how much he's willing to do if I stop trying to handle everything myself.

Am I Still On A Strike?

Naaaah. I set out to go on strike for a full week, but on Friday evening my partner arranged for a babysitter so we could go out for a meal together. Combine that with cupcakes from my favorite bakery, a heartfelt apology, and clean sheets that I didn't have to wash, and my resolve was history.

Although it ended prematurely, I'm really glad I went on strike, and not just because I got buttercream frosting out of the deal. Because being on strike meant that we both needed to do a better job of communicating with each other about things that need to be done around the house, we're now more forgiving of each other for small messes that pop up, like piles of clothes or dirty dishes. I feel more appreciated for the things I do as a stay-at-home mom, and I recognize the effort my partner has made to carry his share of the load. Our house is cleaner than ever and we're both happier for it. But if things backslide, I won't hesitate to go on strike again.