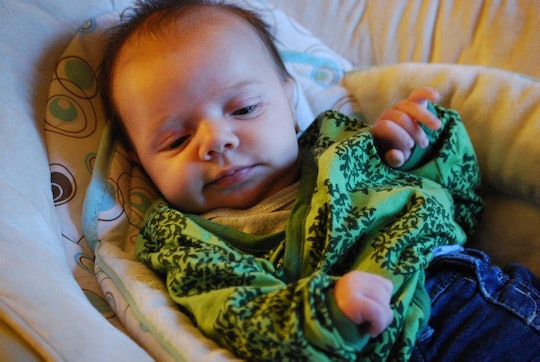 I Went On A Total Elimination Diet For Breastfeeding & It Sucked

My oldest son had a milk/soy protein intolerance. According to Reflux Rebels (a site I used — and use — often throughout my breastfeeding experiences), “Babies with intolerances to dairy [and soy] react to the proteins in the milk [and soy] … the body recognizes the protein as a foreign substance and when it’s ingested, it triggers an immune system response.” The symptoms are myriad, and include reflux, runny, green stool, eczema, and other skin issues, including cradle cap, failure to gain weight, and possible blood in the stool. Blaise suffered from all of them. Because I was determined to breastfeed, and elemental formula is wildly expensive and was far outside of our budget, I had to give up all traces of milk and soy and go on a total elimination diet in order to continue my ability to breastfeed him. If a food had even a little bit of whey added, for example, I couldn’t eat it. If I did, Blaise would end the night screaming. Blaise's condition was so bad I couldn't had even a trace amounts of milk and soy in anything.

More Like This
5 Signs Your Baby Is Too Cold
How To Wean Your Baby Off Formula & Transition To Whole Milk
How Close Are We To A COVID-19 Vaccine For Children?
How To Tell If Your Baby's Behavior Is A Sign Of Stimming

While on the diet, I hated it. I missed cheese, I missed actual bread (all the bread I loved seemed to contain milk), and I wanted cream cheese on a bagel and mac and cheese and Chinese food so badly. But instead, I got salads and French fries. Eventually, Blaise grew out of it. And we hoped that his baby brother wouldn’t have a milk/soy protein intolerance (MSPI), but a week after his birth, it was clear that August had the same symptoms as his older brother. Again, I cut out the milk and soy and waited several weeks for it to clear my system. August didn’t get any better. So I got on the Infant Reflux forums to find out what to do. We couldn’t afford elemental formula, so once again, I needed guidance.

The solution, it seemed, was once again to do a total elimination diet recommended by other mothers, along with Dr. Sears. The diet eliminates all foods except the least allergenic, and adds them back from there. According to AskDrSears.com, an elimination diet "is based on eating the least allergenic food in each of the food groups. You may need to do this for two weeks since it can take this long for the offending foods to get out of your system and baby’s system."

I wanted to pour something in my tea that wasn’t the thin, almost sickly-tasting rice milk. I wanted a potato with cheese and butter and chives and bacon. Oh, bacon. I wanted bacon so bad.

As I was recommended, it required one month of the least allergenic foods (though Dr. Sears now only recommends two weeks). His diet includes “range-fed turkey or lamb, baked or boiled potatoes or sweet potatoes … rice and millet as your only grain, cooked yellow or green squash for your vegetable, and diluted pear juice.” To make it doable for me, I modified it: in place of turkey, I had chicken because it wasn’t the right time of year for turkey, and it was expensive. I ate potatoes and rice, and because I hated squash I just didn’t eat a vegetable, and ate whole pears instead of diluted juice. As Sears recommended, we used rice milk, and I added both black tea and balsamic vinegar. I couldn’t do without some flavoring.

My diet didn’t vary from day to day. I woke up and made a cup of tea with rice milk. We had discovered that Rice Krispies had no real substance other than rice, which made them safe for me. I ate a bowl of those. For lunch, my husband left me chicken breasts. I munched them with rice, both of which I doused in balsamic vinegar for taste. We usually ate dinner out, where I grilled the waiter about the frying oil: did it have soy in it? We only frequented the places that fried in canola, and I had french fries. No ketchup. Breakfast wasn’t terrible. I’m not a big breakfast eater, so the monotony didn’t wear on me. And it was sort of nice to have lunch decided for me as well, even though I longed for something that wasn’t balsamic vinegar on rice. I tried to have a baked potato for dinner once, but it was too sad to eat one cooked and garnished only with salt and pepper.

One week of eating like this was annoying. Two weeks was frustrating, and I began to crave dairy-based foods: macaroni and cheese, good, snarky cheeses like Wendsleydale, and Brie with warm french bread. I wanted to pour something in my tea that wasn’t the thin, almost sickly-tasting rice milk. I wanted a potato with cheese and butter and chives and bacon. Oh, bacon. I wanted bacon so bad. I wanted to drive through a local restaurant and get one of their famous breakfast biscuits, the ones I’d lived on while I was pregnant. I wanted food.

Eventually we discovered he had intolerances to strawberries, tree nuts, peanuts, all citrus fruits, artificial food dye, and eggs — all in addition to milk and soy. I had to keep all of these things out of my diet for a good six months before we could begin adding them back in.

By week three I'd lost 10 pounds and probably would have eaten a stick of butter whole. Or I would have settled for one real peach. Or asparagus. Anything to take away the monotony. August was slowly getting better, less fussy and less miserable. Luckily, my supply stayed up, and I wasn't moody or irritable.

We started, finally, to introduce foods back into our rotation. I had a peach, and August seemed to do well. Then I ate some walnuts, and he was back to screaming. Eventually we discovered he had intolerances to strawberries, tree nuts, peanuts, all citrus fruits, artificial food dye, and eggs — all in addition to milk and soy. I had to keep all of these things out of my diet for a good six months before we could begin adding them back in. It was hard, but not impossible, to the eliminate those things so I could continue breastfeeding. And I wanted to continue breastfeeding; aside from my own attachment-parenting principles, we couldn't afford the elemental formula milk/soy intolerant babies require.

August is 4 years old now. He’s grown out of everything but the milk and the peanut intolerances. Milk makes him throw tantrums and destroys his impulse control; peanuts cause a pimply-like rash on his cheeks. I hated going without real food for a month, but it was worth it to make sure my baby was healthy. It’s not for everyone, but we had the means and the time to do a total elimination diet. I’m grateful for that. But even though I am grateful we were able to provide for our son, I'm not grateful for the restrictive eating. It totally sucked.