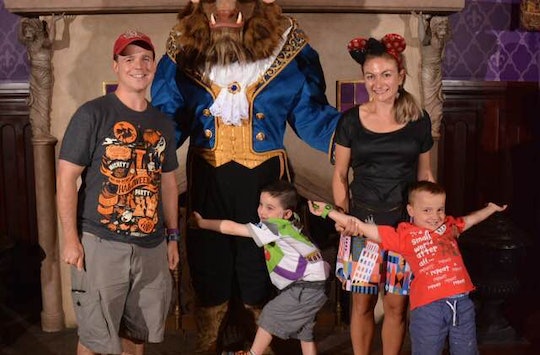 When you imagine taking your kids to Disney World, you envision a Travel Channel worthy collage of all the pictures you'll pose for — smiling in front of Cinderella's Castle, hugging Mickey Mouse, eating mega sundaes together with hot fudge mustaches. But rather than capture every moment, this year I made a point to put down the phone and take less photos on vacation, and I'll never be the mom hissing "SMILE" through a clenched jaw again.

I didn't plan on our vacation being a selfie-free zone. Like every other mom I know, I post photos of my kids constantly — fun day trips we take, silly moments around the house. Part of the reason I take so many photos is for family who live to far to visit on without a road trip. But honestly, those little hearts and thumbs ups people grant to their cheesy smiles are validating to me. In the moments when I'm feeling like a crap mom, when I realize that I forgot to thaw the chicken we were supposed to eat for dinner, the kids are piled on the floor giving the cat more love than he can handle, and I'm wearing the same pair of leggings for the third day in a row under the false pretense of conserving water by making less laundry, seeing people "like" photos of my family gives me the feeling that I'm doing something right. And looking at pictures of my kids reminds me that not every minute of this mom gig is panicking over missing socks or pleading with them to finish their cereal (even if it feels like that sometimes).

So I had every intention of taking alllll of the pictures while in Disney. Both as proof to everyone scrolling by of what an awesome time we were having, and a reminder to myself that spending a giant wad of cash on a week in the humid swamp was worth it. I wanted framed a gallery wall for the living room and maybe the perfect picture for this year's holiday card. I even cleared out all my old texts and deleted the 93 selfies my son had taken of his ear before we boarded or plane to make sure I had as much memory space in my phone as possible.

The first day of our trip was a giant photo shoot. I dragged the family up to every Disney photographer we saw (they're as common as the tiny lizards that live in central Florida) to make sure we wouldn't miss getting pictures of anything. By the end of the day, my twins were so over standing still and saying "cheese." They wanted the pool, they wanted roller coasters. Instead of smiling nicely, they started to get silly in photos — pretending they were made of stone or sticking their tongues out. I started to resent taking them on vacation at all.

That night we went to a Halloween party in the Magic Kingdom. Like 3,000 other families there, we wore shirts from The Incredibles, and I was annoyed when my kids blazed through the candy trail and refused to pause for photos. I was determined that at some point, we'd get our perfect Incredible family photo.

But then we took a spin on the tea cups. As we waited for the ride to start I saw a Mrs. Incredible, her tween son, a young daughter and a baby in the green cup next to us. My first thought when I saw her and her kids was Ursula-wanting-to-sing levels of jealousy over their full costumes compared to our t-shirts. But then I caught what she was saying (I wasn't trying to eavesdrop, those tea cups are close!). She was swiping through her phone and lecturing her son about how he had ruined all the photos they'd taken. Then she demanded he take "good" photos with the family for the rest of the night.

I cringed at how ridiculous she sounded — did she not realize she was missing out on enjoying the ride with her kids all because she was complaining about not having a good photo to post online? Could she not see how unhappy her son was? Didn't she realize that — Oh wait, I'm this mom too.

I wish I could thank Mrs. Incredible because overhearing her interaction with her kids changed my entire vacation. It was in that moment that I realized this trip was supposed to be about spending time together and having fun over having cute pics to look at. And if my kids didn't think taking photos was fun, then it was time to stop. I had planned to film us on the teacups, but I put my phone away instead. We spun much faster with me helping anyway.

Living that photo-free live isn't easy. Letting go of the phone is easier said than done when you're as addicted to Insta as I am. The first time we passed the famed Purple Wall I struggled to keep walking (yes, there's a line to stand against a blank wall to take a photo, typically with a Mickey Ice Cream Bar or purple smoothie).

And it's hard not to feel some serious FOMO during a parade or fireworks show when everyone else around you has their phones up. But honestly, how often am I going to snuggle up on the couch and rewatch a blurry video of fireworks featuring that random kid crying for popcorn in the background? Plus not watching the shows through the 3-inch screen on my phone made me appreciate how much detail there was to all the performances, and I was able to look around and see my kids' delighted smiles, which honestly was the best view anyway.

Of course, I made exceptions to my no pictures decree. If the kids asked to meet a character or princess, I told the photographers they could snap away, but didn't force the kids to pose if they didn't want to. We got some amazing candids that way, like one of my son discussing with Ariel what it's like to talk underwater. And my millennial DNA compelled me to post a snap of the amazingly delicious poison apple cupcake that I ate at 8:30 a.m. because it was sold out every night I tried to buy it, and once I saw they had it, I wasn't going to let it pass me by.

It wasn't just seeing the fireworks in living color that made me happy with my choice to put down the phone. We got on more rides and saw more attractions than planned because we weren't constantly stopping to pose in front of each attraction or so I could check social media to get a likes tally. I actually had some deep (and funny) conversations with my kids about what they want to be when they grow up and how they think magic works while waiting in lines that I'm not sure would have happened had I been more worried about finding the perfect filter.

Not pulling out my phone for a photo every 10 steps also allowed me to focus more on what we were doing rather than how I looked, which made the trip much more relaxing.. Before we left, I Googled powered sunscreen to layer over foundation because I wanted to avoid skin cancer but also didn't want to even consider taking photos without a full face on. I pinned Disney inspired outfits, trawled Target for Mickey tees and planned what I would wear every day, even down to coordinating shirts for my kids and partner. If I was really into fashion and makeup this would just be part of the vacation fun. But for me, planning "looks" for Disney was stressful.

Once photos were no longer the focus, I let myself do what I really wanted, which was tuck my humidity swollen hair under a baseball hat, slather on some sunscreen — sans makeup that was only going to sweat off anyway — and hit the parks.

Surprisingly, and perhaps because I wasn't acting like a deranged paparazzi all the time, my kids actually wanted to take some photos. They started asking to take pictures throughout the trip, and because it was at times when they were the ones who wanted a picture, they actually smiled and didn't have to bribed with trips on Splash Mountain afterwards.

But I had to let go of the idea of this perfectly posed, Instagram model family. Even when they wanted to take a picture to remember the moment, the memory they wanted was usually of them in motion or being silly. Truthfully, perfectly still, quietly smiling people are not who my family is anyway. We sing and dance and talk with our hands constantly. So I decided to embrace the idea that the photos we did get on this vacation would be one of who my kids really are, not someone they're pretending to be.

There were times when I'd get annoyed that they wanted to take a picture, because to me it seemed like the things they wanted to pose in front of were totally random. Sure, the Pixar Ball is cool, but both Woody and Buzz Freaking Lightyear are five steps away — why not take a photo with them instead? But every time I tried to play photographic director, they'd get frustrated and the picture would come out awful. So I gave in to taking photos in front of the random walls and plants that struck their fancy.

Not only were the photos better, but I realized that letting my kids have some creative control over how we documented the vacation was there way of showing me what parts of the trips stood out to them and what they were really loving. Suddenly I loved their seemingly random photo requests.

I'm not completely cured of my obsessions with taking pictures while on vacation, but I've made huge progress. My partner and I took a combined 59 pictures over 10 days, and more than half of them were at the kids' request. I may not have gotten a gallery wall that Chip and Joanna would be proud of out of the trip, but i'd rather have the memories of experiencing rides, shows and special moments with my family rather than the memories of taking photos of them.