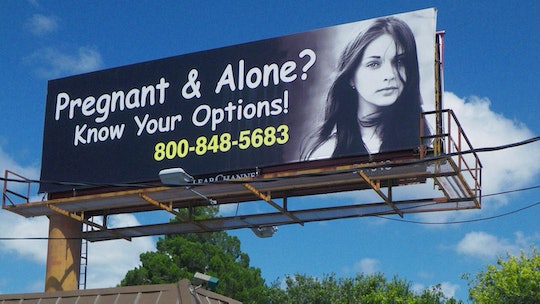 A Fake Women’s Health Center Lied To Me When I Was Pregnant, & It Should Be Illegal

I was 21 years old when I found out I was pregnant. I didn’t know what I was going to do, but I knew that before I made a decision about my pregnancy, I wanted to get information from a medical professional — information that I could use to make the right choice for me and my partner. I remembered that there was a place I had passed dozens of times, right near my college in a working-class town that said it offered help to pregnant women looking for information. The women's health center had a very generic name — "The Pregnancy Center" — the kind you’d expect to see at any health clinic. So, I made an appointment, hoping they could provide me with the help and information I needed without requiring me to take extra time out of my college classes.

But the "pregnancy center” wasn’t a real health clinic. The place I visited was a fake women’s health center — you might have heard of them referred to as “crisis pregnancy centers.” These places are at the center of a case that the Supreme Court is currently hearing arguments on.

These fronts are in the business of deceiving pregnant women like me into thinking they offer comprehensive medical care, when in fact they pressure, manipulate, and harass pregnant women into not getting an abortion. They lure pregnant women to their centers by hiding their anti-choice agenda with unassuming clinic names, websites that feature people in white coats, and offices modeled exactly after real health clinics. And they actually outnumber legitimate abortion providers, according to a Supreme Court filing cited by The New York Times.

It has been well-documented that, once new patients are in their doors, they lie about medical facts. When I arrived at my appointment, the waiting room looked like a typical waiting room at a doctor’s office. I checked in with the receptionist the way I would at any other doctor’s appointment. There were no crosses on the wall and no other signs to indicate the center was anything but a real medical facility.

It wasn’t until after I was directed to a patient room that I realized something was wrong. The staff kept calling me “mommy,” and my boyfriend “daddy,” while pressuring me not to have an abortion, and I wasn’t given any information about my health care options — just lies. They told me abortion was an unsafe option, something I know isn’t based on evidence or science. Their lie was meant to scare me out of my options. I left the center feeling angry, manipulated, and ashamed.

They continued to harass me, and the only way I felt I could get them to stop calling was to tell them that yes, I chose to have an abortion.

The possibility that I wouldn’t get the care I needed never crossed my mind. Nothing that I had seen about this clinic would have led me to believe otherwise. I was vulnerable in that moment and scared. I thought I would get the information I needed to make the best possible decision for myself. Instead, I was lied to, deceived, and shamed.

It didn’t stop after I left the center. The staff there — the same people that tried to shame me and make me feel uncomfortable — kept calling and calling, asking if I had an abortion or not. They kept trying to pressure me to commit that I wouldn’t have one. They continued to harass me, and the only way I felt I could get them to stop calling was to tell them that yes, I chose to have an abortion.

In California, we passed a law in 2015 — the Reproductive FACT Act — that required health centers to post small, straightforward notices informing women of the reproductive health care programs available, including safe and low-cost abortion services. This is a common-sense law to help ensure that pregnant women like me get comprehensive information and not the runaround by clinics with hidden agendas. Fake women’s health centers then sued to block the law, under the umbrella of the National Institute of Family and Life Advocates — a member of the National Pro-Life Religious Council — and the Supreme Court began hearing arguments on the case on Tuesday.

I worry that the same thing that happened to me will happen to other pregnant women and their families who are just looking for information.

It’s hard to believe that something that directly affected me is in front of the nation’s highest court, but I now realize I’m one of countless women impacted by the shame, blame, and deception that comes from fake health centers — all of which has been established by Congressional investigations. These fake women’s health centers are part of a national network. There are over 2700, in every state across the country. They use the same playbook and tactics pushed by anti-choice activists like Abby Johnson, who told fake women’s health centers that: “Women seeking abortions, women that are pregnant, that are vulnerable, they are going into Google and they are typing ‘pregnancy symptoms’ … The best client you ever get is one that thinks they’re walking into an abortion clinic.”

For the past 15 years, Grace Powers has been active within a variety of reproductive health and justice settings.