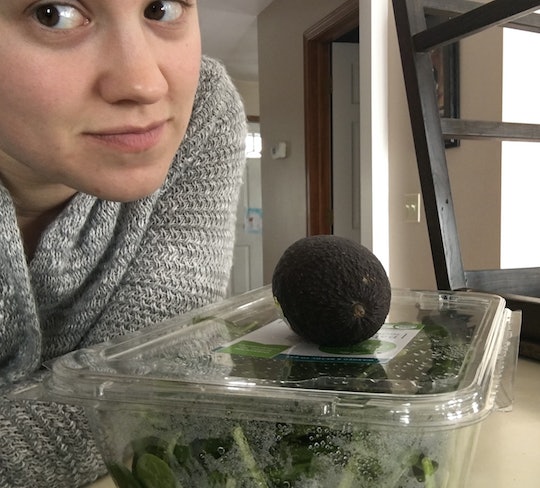 I Went Vegan For A Week & This Is What Happened

I've always been intrigued by the vegan lifestyle. Not only does it seem like all the coolest celebrities are vegan, but it's always been something on my "life list" that I've wanted to try because it seems like one of those healthy, do-good things that adults do, like meditate and do yoga daily. (Which, for the record, neither of which I actually do.) Going vegan in your diet basically means that you eliminate any animal byproducts. According to TheVeganSociety.com, eating like a vegan involves eating only from a plant-based diet and "avoiding all animal foods such as meat (including fish, shellfish, and insects), dairy, eggs, and honey — as well as products like leather and any tested on animals." I was interested.

I follow a few women on Instagram, like Sherelle Gilbert (@sheexperienced), who practice a vegan lifestyle and it looks kind of delicious. I'm not a huge meat-loving person — well, aside from bacon — and I actually discovered that most red meats don't really sit well with me, so I've eliminated them from my diet entirely. I figured that since I already was on a roll removing products from my diet that didn't make me feel good, I might as well continue the trend. Plus, I once had some vegan peanut butter balls and they were amaze-balls, so I thought any diet that has that kind of goodness must be worth checking out.

I decided to see what it would it be like to go vegan for a week. I browsed my trusted Pinterest for some budget-friendly vegan meal plans, like this one and this one, and gave it a shot. Going vegan honestly didn't seem like that bad of a deal and if it made me feel better and I got to include more vegetables into my meal routine, then how could that be bad?

I marked my calendar for a week filled with the vegan lifestyle, and this is what happened:

OK, first things first, I'm just going to get this out of the way: I make an extremely boring vegan. I knew I didn't have it in me to focus on breakfast and lunch, 1. because I have four small children and 2. because I sincerely love eggs and knew that I would miss them so very much. So I made up a huge batch of overnight steel cut oatmeal and literally ate oatmeal, almond milk, and some kind of fruit every single day for breakfast.

I happen to love oatmeal and after a week on the Paleo diet, when oatmeal was not allowed at all (how can oatmeal be healthy sometimes and other times it's the devil? I don't get it!), eating it every morning felt like a luxury. Plus, it was so incredibly easy to just pull the oatmeal out of the fridge and not have to think twice about what I would be eating that day. It was filling and I had fuel for the day, and it was a quick meal to put together.

For some strange reason, going vegan actually made me excited to cook dinner for once. Normally I hate cooking, but I was excited about the challenge of cooking something that would be different and healthy, but still delicious during my week of vegan eating.

I had a head of cauliflower about to go bad in my fridge and it was a cold and dreary day, so after some digging around, I decided to try this creamy cauliflower chowder made with almond milk. I totally didn't tell my husband what was in the soup and especially that it was vegan, and he choked it down, but I'll be honest, it wasn't the most delicious soup of all time.

It was decent for having nothing but cauliflower and almonds in it, but it still tasted kind of blah and also definitely looked like vomit (sorry). All that said, I love soup and, even better, it made for easy leftovers for me.

Listen, people, I have my limits and apparently, black coffee is one of those limits. I already had suffered through a week of no half-and-half in my coffee when I tried going Paleo (highly recommend it, BTW), and after I reintroduced the stuff into my morning routine, I'm not ashamed to admit I had a full-on coffee-gasm when that delicious mixture of hot and creamy touched my lips. So, moral of the story? I love my coffee with half and half, and now everyone knows it.

But I was willing to give a few other options a shot and I found this coconut milk creamer while doing my weekly grocery shopping and decided to try it out. I actually do not see how anything processed could be "healthier" than real half-and-half, but I was willing to give it a go and see if I could wean myself off my half-and-half addiction again.

Sadly, however, I have to report that this stuff is nasty. (At least in my opinion.) It tastes way too sugary and fake and the texture isn't even near as creamy as half-and-half, so honestly, there's just no point. Back to black for me. Sigh.

When I told people I'd be trying out a whole bunch of different "diets" — Whole30, Vegan, and Paleo — a lot of them mentioned how they simply could not imagine a life without cheese. And when I thought about it, I realized that my diet did have a lot of cheese in it. But surprisingly, giving up cheese was the easiest part. I actually find the idea of too much cheese in one day revolting now. After I finished the vegan diet, I went back to eating "normally" and in one day, had egg casserole that was made of cottage cheese and cheddar cheese, milk with dairy creamer in it, and pizza with cheese on it and I felt bloated and so awful that I realized that there is definitely something my body does not like about cheese. It's not worth it to me now to eat it.

I'm a big snacker and a grazer, especially because most of my day is spent running after small children and I swear I never have time to actually eat a real meal, so I ate a lot of carrots and hummus throughout the day. In fact, you might say that I started a love affair with hummus. It was a nice change-up to reach for carrots for a crunchy snack instead of chips or something processed and honestly, hummus is just awesome.

My staples on the vegan diet quickly became: fruit, oatmeal, almond milk, almonds as a snack, hummus, avocados, and more spinach than you would think any one person could eat. A lot of people might find relying on simple staples limiting or frustrating, but for me, I've found that as I ease into a healthier lifestyle, it helps to have staples to fall back on. I think of it as exercising — I'll learn more as I go along, but for now, having food that I don't have to think a lot about, especially between work and raising four kids, is getting the job done. To some, my choices might've been bland and boring, but like I said, I'm a boring vegan.

While the rest of my family downed delicious tacos for dinner one night I was hosting a playdate for 10,000 of my daughter's friends (OK, it wasn't really that many, but still second grade girls have a way of being extremely loud), I whipped up my own version of a Mexican fiesta.

I skipped the meat and tortillas and instead, loaded up a salad with avocado, sweet corn, and tons of fresh cilantro. And I felt like I stumbled upon a miracle of what it means to actually eat fresh, healthy, good-for-you foods — fresh herbs make all the difference. I quickly became obsessed with fresh cilantro in everything and honestly, I can now eat an entire plate and spinach as long as it's loaded with fresh cilantro. Try it, and thank me later.

My dad has been on a big vegan kick after he watched some Netflix documentary about how meat is evil and he urged me to try his gross fake cheese, but I just passed on anything vegan that's supposed to be a substitute. In my mind, processed food is never healthier than the real deal and I just didn't want to go there. Maybe one day I'll get around to eating tofu, but for now, I felt like I got all the nutrition I needed from the meals I created for myself.

In addition having overnight oatmeal every morning as I weaned myself into veganism, I also ate a smoothie every single day for lunch. I ordered myself some organic raw vegan meal from Amazon at the recommendation of my sister-in-law. It boasted all kinds of organic vegetable-y sounding stuff and I found that it really helped keep me full. I loaded each of my smoothies with tons of spinach and either a banana or a handful of frozen blueberries and almond milk.

Unfortunately, I found that the smoothie really upset my stomach, but I kept hoping it was just because it was so raw and good for you and I just needed time to adjust to it.

On the last day of my vegan experiment, I got this super, duper cool email about my precious organic raw vegan meal and yes, my lot was affected. Turns out, that upset stomach I'd experienced maybe was just a weird reaction to the ingredients that I just needed to get used to, it was actually bacteria. Uh. Surprise?

Morale of the story is that vegan isn't always better for you, I suppose, and eating something from the actual earth is probably better than pouring something powdered from a tub of plastic that you can order from Amazon and have shipped within two days to your door. Who would have guessed it?

However, my love of fresh cilantro and my ability to eat giant tubs of spinach in one setting are loves that I think will prevail for the rest of my life. So we'll call this experiment in eating healthier a huge success. And even better, when my husband cooked a huge steak last night and it was juicy and oozing delicious juices, I wasn't even tempted.

OK, I was tempted but I only stole one teeny bite from the toddler's tray. Just pass me those vegan peanut butter balls.

I learned that going vegan is a lot easier than I thought it would be. My husband had warned me that I would be starving by the end of it, but I didn't find that to be true at all. Oatmeal is filling in a pinch and my smoothies really filled the gaps when I didn't have a lot of time.

I'm fully convinced it would be possible to live a very balanced diet as a vegan, but ultimately, a restricted diet is just not for me. I have no desire to live by rules and I'm married to a man who raised pigs and beef and I know fully where the meat we buy comes from. (His father's herd.) So I'm not opposed to meat for any moral reason, but I'm actually incredibly thankful I went through the experiment because it sealed the deal that cheese = bad to my body. I had my doubts, but now I know something is definitely up when I OD on the cheese-y stuff. Moving forward, I feel like eating chicken and salmon and bacon again is like a gift from the gods, and as long as my body seems to respond well to it, I will keep eating it.

Now, if someone could please tell what there favorite recipe for vegan peanut butter balls is, I would appreciate it.