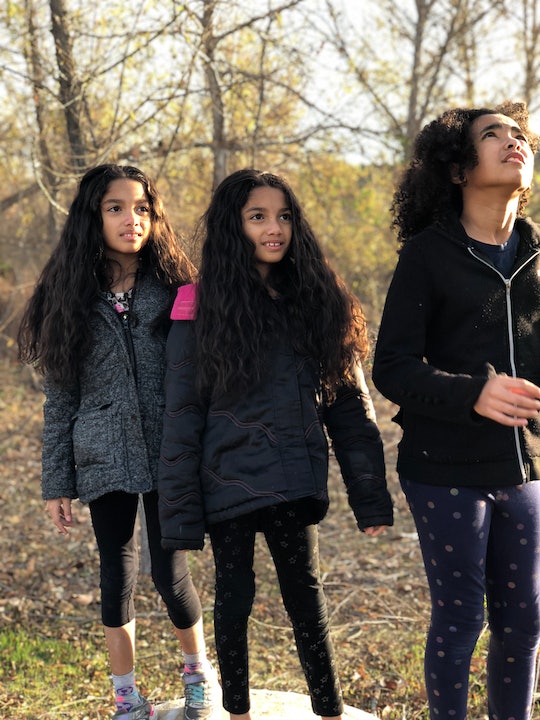 My Husband Takes Halloween "Recovery" Days, But Is Too Busy To Help With School Stuff

I am married to a devoted dad, but here's a scenario that is too familiar to many moms: recently, I sent my husband to our daughters' school to pick all three of them up early — a job that usually sits with me, as the one with the more flexible work situation. When he realized he'd have to do it by himself, he seemed flustered, almost frustrated. After being gone for a small amount of time, he then called to ask me what their teacher's names were, and needed to be reminded of their grades in order to sign them out of school. He is a wonderful and hard-working dad, but not very involved with school stuff. It's a super common dynamic, and something I really think needs to change.

As a mother of four, sometimes I feel quite overwhelmed (LOL understatement). There's always something to do, no matter the time of the day. I have three kids in the same elementary school and it's hard to keep up with all the school events (again: understatement). I think that my husband probably believes that I have everything covered. But it's not a matter of whether I can handle things, I want him to be involved. When fathers are involved in their children's education, they tend to do better in school.

Yes, it is understandable that he doesn't have a lot of time. He works five days, and it's a 40+ hour workweek. Even when he comes home tired, he still does things around the house — he's not so conscience-free that he'd ever come home to lie down and rest. So it's not an issue that I bring up often, but when he can afford the time, he doesn't put forth the effort.

When he does get home from work early, he's either cleaning or working on a project of his own, not, say, offering to handle school pickup. This past week, our oldest daughter had a big project due and both of us forgot about it. She had to do all of it last-minute, meaning that on Sunday night she was up later than her sisters, pulling the middle-schooler's version of an all-nighter (an "all-10:30er," let's say). Yes, she's 11 and it is her responsibility to keep up with her school and homework, but as her parents, I feel as if we both should've been on top of things — if I dropped the ball, shouldn't my husband have been there as backup?

One of the reasons dads say they can't be expected to know this stuff, and one of the reasons moms end up responsible, is that it's in mom's calendar. I don't buy that setup: when something comes up relating to the kids' schooling, I'll put it in my calendar and then send it to my husband's calendar also, and wait for him to accept the invitation so he'll get a reminder. Still, he asks me over and over again the upcoming dates of things.

Last year he was able to attend all of the girls' school plays, which was a big deal for them. Unfortunately, that was it. I attended Back to School Night, Museum Day, Art Day and a plethora of other school "Days" and "Nights." It was a hassle, of course, as I had to lug around all four kids, including my toddler, to these events (do you have a babysitter on hand for school events? Me either). It wouldn't have been so bad if my husband had been there to help out.

Part of me wants to congratulate the men on their progress — back in the day, mom got the children ready and off to school and was there waiting with a snack in the afternoons as they got off the school bus (my source: Leave it To Beaver) — but there is a definite trend toward the mother being the more involved parent in terms of the children's schooling and learning, for all the egalitarian beliefs we hold.

Sorting out the school dropoff arrangement is pragmatic, of course — last year my husband took the girls to school, whereas he now rides his bike to work and needs more commute time to make it by 9. My picking up the slack was a question of efficiency. But it's still a choice on his part.

It's a choice when he decides he can take a day off work to have a Halloween "recovery" day, but can't swing a paid-day-off to attend a school event.

It's a choice to let me be the repository of all kid-related information — teachers' names, grades, friendship alliances, musical numbers, and on and on.

It's a choice to be the parent the kids get exited to see at their performance, rather than the parent they expect to see there in the third row, juggling a toddler, stroller, and iPhone camera.

It's a choice to ride his bike to work.

I love him to no end, but he has these choices and he chooses to let me go it alone.

More Like This
These Back-To-School Supplies On Amazon Are Total Wins
18 Cute Notebooks That Make Every Subject Exciting
How To Build An After-School Routine That Works For Your Family
Where To Buy School Uniforms, From Jumpers To Dress Socks