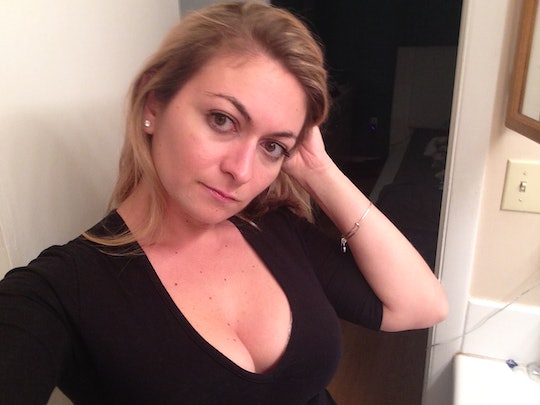 It's a conversation I'll never forget. There I was, oceanside, next to an awesome guy I'd only just met but thought might just maybe be The One. We were gazing over the people to the horizon when he made a noise of disgust. "Gross," He said. "That mom is wearing a bikini." When I asked him what was wrong with that, he elaborated. "Kids shouldn't have to see that. Moms shouldn't wear outfits that show that much skin, they should be asexual. I'd never let my wife embarrass the kids like that."

Obviously that dude never even made it to first base with me. And I went on to marry a guy who has nothing but complimentary things to say about my clothing choices. But still, the idea that some people think becoming a mom meant covering up your body stayed with me. When I finally kicked infertility's ass and had twins, I had to admit that ads in parenting magazines, commercials directed at mothers, and even the other moms at toddler gymnastics class seemed to agree with Mr. Still Single: once you become a mom, skin is no longer in.

Regardless of how a woman's postpartum body looked, I felt like every frame of reference I had for what moms should wear was the same: Sensible shoes, long pants, and tops that covered everything from collar bone to button fly. Seeing a hint of thigh was like spotting the Loch Ness Monster. I understood the lack of accessories, as it only takes a baby yanking on your chandelier earrings once to retire your jewelry until they're graduating high school, but I couldn't see why women with kids were only portrayed in conservative, covered-up outfits. Since when did the fact that I had a diaper bag instead of a clutch mean I can't wear a mini skirt?

For the first six months of my boys' life, I tried it. I wore thick, long skorts (yes, they still make skorts) that made my thighs sweat and high-collared shirts. I wore "sensible flats" that did nothing for the calf muscles I'm so proud of. I was a new mom trying to do everything the "right" way, but I was miserable. At night I would secretly thumb through pages of fashion magazines like it was Penthouse instead of Vogue, wistfully looking at women in gorgeous lace tops, playful sweaters with peek-boo backs, and short dresses paired with amazing fall boots.

Everything changed when I went shopping for an outfit for the kids' Baptism. I was enjoying a rare hour alone in the mall, but I was miserable because I couldn't find anything to wear that seemed "appropriate" that I still thought was pretty. And then I saw this adorable green and blue striped mini dress that was absolutely something I would have worn to rags before I had kids. So I cried. And then I called my husband, who told me to stop worrying about what other people thought just try on the dress already. I did, and I finally felt like myself again. I haven't looked back since.

I choose to dress the way I do for my kids. I want to set an example for them that self-expression and being happy with your body and yourself are vastly more important than whatever the world says you should wear because of your age, gender, or position in society.

For me, choice to show a little skin goes beyond the decision to wear a two-piece bathing suit or a strapless dress to a wedding. As a stay-at-home mom, I spend the bulk of my days in yoga pants and t-shirts of varying levels of cleanliness. I don't have the opportunity to dress up for work in heels and suits like I used to. So when I do get the chance to venture our of the house, I want to wear something that makes me feel good, even if I am only headed to Target. I'm proud of the fact that my breasts survived the transition from pregnancy to food source back to postpartum relatively unscathed, and I like to highlight them on a regular basis, not just dust them off for special occasion.

I want my sons to grow up knowing that all women, women with kids included, can and should dress however they wish, and that someone's outfit doesn't entitle men to treat them with anything other than respect.

I know there are people who will say showing some skin makes me an embarrassment to my children, or that I'm trying to seek attention through my clothing (or lack thereof). I could use the "I'm not dressing for other people" card, but that's not entirely true. While I might select a body skimming top over a looser one because it makes me feel good and I don't care about other's opinions about my body, I choose to dress the way I do for my kids. I want to set an example for them that self-expression and being happy with your body and yourself are vastly more important than whatever the world says you should wear because of your age, gender, or position in society.

I may not have a daughter to impress these important lessons upon, but I have two sons, and it's just important for young boys to understand that a woman's body is her own as it is for girls. I want my sons to grow up knowing that all women, women with kids included, can and should dress however they wish, and that someone's outfit doesn't entitle men to treat them with anything other than respect.

Feeling confident in your clothes is something that should last a lifetime, not a limited-time experience that ends once someone starts calling you mom.

Sure, there are practical issues to consider. You can't chase after a sprinting toddler in stilettos without risking a trip to the emergency room. I've learned the hard way that babies will take a low v-neck as an invitation to help themselves to a drink and unless you want to explain anatomy to a bunch of preschoolers, joining your kids on the slide in a skirt requires bike shorts.

So I've adjusted my outfits accordingly. My heels are a little lower now and my hemlines a touch longer simply because things shift around when you're holding a squirming kid and if I'm going to perform a peep show, I'd rather not do it for free. Yet I still dress in a way that makes me feel good about myself, even if that means wearing a little less than some people think a mom should.

I'm part of a generation of women focused on teaching our daughters to be body positive, to wear crop tops, bikinis, or whatever makes them feel good in their skin regardless of their body type. But if I cover up simply because moms aren't "supposed" to dress sexy, then it's a failed lesson. Feeling confident in your clothes is something that should last a lifetime, not a limited-time experience that ends once someone starts calling you mom.

My cleavage may have a stray Goldfish cracker tucked in there once snack time is over, and yes, I did lose a great pair of boots to a red marker this fall (rest in piece, my darlings), but the person I was before I had kids still exists, and she's not giving up her short shorts any time soon.