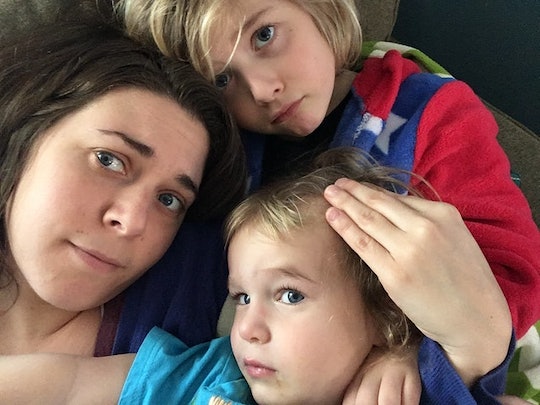 Why I Won't Let My Daughter See A Male Doctor

My daughter is crinkling the edge of the crunchy paper she’s sitting on and paging through a book about superheroes when the pediatrician raps on the door. “Come in!” I call out. I pull my toddler son up onto my lap, so he will be out of the doctor’s way. My daughter sits up straight and closes the book in her lap as two men walk into the room. One is our older, gray-haired pediatrician, the other is a young male resident. He shakes my hand and tells me he will be observing today.

The older doctor looks at his laptop as he asks me a series of questions about my daughter, the same as he’s done at every check-up before. He is not known for his charming personality, but he’s thorough, receptive, and a good listener. We’ve had several pediatricians over the years before settling on this practice, and so far I've had no issues with this doctor. But I am startled by one of his instructions.

“She can take off her clothes now, except for her underpants,” he says.

I'm shocked. I've never heard this doctor ask my daughter to take off her clothes during a checkup. At past appointments, he simply lifted my daughter's shirt to press on her belly or listen to her heart. To make matters worse, he doesn't offer to leave the room while she disrobes. Neither does the resident.

I realize that patients are sometimes required to get undressed at doctor’s visits, and I imagine that now that my daughter is getting older, the doctor wants to examine her more thoroughly. But I don’t ask him to explain his reasons for making the request. All I can think about is that my 7-year-old, who recently started changing in her bedroom with the door closed, is nervous about undressing in front of these men. I focus on trying to put her at ease, instead of drawing more attention to the discomfort of the situation.

“Is that OK with you?” I ask my child, who has now crept into the corner and is crouching behind my chair, trying to figure out how to remove her shirt without the doctors seeing her body. The two male doctors just stand there, waiting. No one offers to step out while she undresses, even as she shimmies further behind me.

I want her to know she has a choice: she doesn’t have to follow his orders. “You don’t have to take your clothes off if you don’t want to," I tell her. But she is always well-behaved, at least in front of other people, and because the doctors aren't agreeing with my suggestion, I know that she's going to follow his orders, regardless of whether she's comfortable getting undressed or not.

I’m wondering why I even have to explain my child’s modesty to these two men, as if it is somehow wrong or shameful.

It’s taking several minutes for my daughter to remove her clothes. I feel like her privacy isn't being respected, and I’m getting irritated. I’m not sure if they haven’t noticed her discomfort, or if they just don’t care.

“Can she please have something to cover with?” I ask. “Like a gown or something? She’s modest these days, if you couldn’t tell.” My tone is polite, but to be honest, I’m wondering why I even have to explain my child’s modesty to these two men, as if it is somehow wrong or shameful.

The pediatrician looks confused, as if he’s never heard such a bizarre request from a little girl’s mom before, but he digs in a drawer and pulls out a green paper sheet and hands it to me anyway. I hold it over my daughter like a dressing room door so she can finish undressing, then wrap it around her like a bath towel and lift her back up onto the table.

The doctor walks over and takes down the sheet to examine her. He gives her no warning before he does this, causing every muscle in my body to tense up. My daughter is staring straight at me, almost like she’s asking me for help. I feel like I'm frozen. I’m wondering why he put his hands on her without asking, especially after he saw how uncomfortable she already was. At one point, he peeks into her underwear. He doesn’t ask her permission to do that, either.

At this point, I decide to speak up. “Honey, you know that’s only okay because you’re at the doctor and because mommy is here, right?," I say. I soon realize my mistake. Instead of making allowances for the doctor to touch my daughter without warning or without obtaining her explicit consent, I should’ve been explaining to him how what he did was just wrong. He should've asked before he touched her. But by standing by and letting it happen, I just implicitly told my daughter that because he's a doctor, a.k.a a man in a position of power, it was pretty much OK.

My daughter stays silent. I can almost feel her breathing heavily as she waits for the exam to be over. We say thank you and good-bye and grab a sticker at the front desk.

I decide to switch to exclusively seeing a female doctor — not just because she is a woman, but because she has always, clearly and intentionally, asked for my daughter's consent before putting her hands on her.

"Would you like to make your next appointment now?" the receptionist asks.

I think about it. Next year, my daughter will be 8 years old. I already know that I can't stand by and let her have another appointment like this. I can’t get over how brusque the doctor was, and while I don’t want to simply blame his rudeness on his gender, I know that many old-school male doctors are used to a more paternalistic era, when it was standard for doctors to give out instructions and have those instructions blindly followed.

I can’t help but feel like we wouldn’t have had that sort of an issue with a female doctor. In my experience, not only do women practitioners tend to be more intuitive, but they also likely remember what it was like to be a nervous, modest little girl. Luckily, there is a female practitioner at the office, and we've seen her many times. I decide to switch to exclusively seeing her — not just because she is a woman, and I know my child is getting to an age where she will be more comfortable with a female doctor, but because she has always, clearly and intentionally, asked for consent before putting her hands on her.

“Make it with Dr. R, please,” I say to the receptionist. She smiles and hands me the appointment card and we make our way out of the office.

As we walk through the parking lot, my daughter is back to her normal, chatty self. But I am angry and disappointed in myself for how I handled the situation. I think about the day I had my my first baby, and how I was forced into a bed to labor and subjected to one intervention after the next. I'd felt like my rights were being stripped away on the delivery table. Since then, I’ve tried to advocate for informed consent and women feeling empowered to make their own healthcare choices, whether they're 3 or 93. But when I saw a doctor touching my own daughter without her explicit permission, I didn't speak up on her behalf.

I wish that I had been more outspoken, and I wonder if perhaps, to an extent, the impulse to follow an older man's instructions without questioning them is ingrained in me, too. Not only did I fail to school our old-school doctor about the value of consent, but I also failed to use the appointment as an opportunity to teach my daughter the same lesson. While we've frequently talked about the value of consent and how our bodies belong only to us, this was the first time we'd been in a situation that called for exercising her ownership over her own body, and I wish I had taken advantage of that.

When we get in the car, I explain to my daughter that I didn’t like what just happened at the doctor's office, and why I felt it was so wrong.

“Yeah, that was weird," she says, adding that she had never been touched there before and it felt strange that someone would do that without asking.

“I’m so sorry you felt uncomfortable,” I say. “I’m so sorry I let it happen. I’ll never do that again, OK?” We agree that from now on, we will only see the female doctor, but I still feel incredibly guilty. Because consent matters, no matter what, and teaching it to our daughters is important.

I can’t get a do-over. I can’t take back the fact that I failed my child in this instance. But in my heart, I know there will be many more opportunities to teach her about consent. Next time, I won’t be afraid of my own voice, so I can teach her the power of using her own.