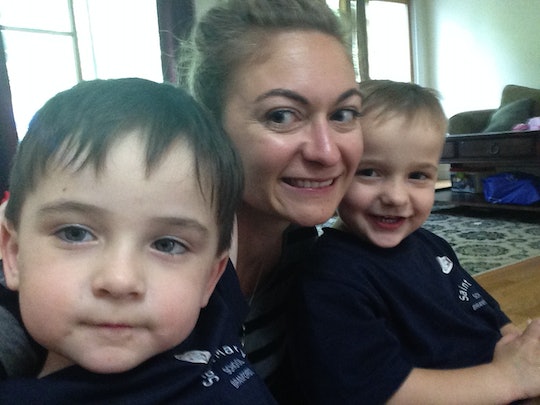 When my twin boys were born, one of the things I was most excited to do once they came home was send out birth announcements. Having struggled to conceive and opening the mail to photos of my friends' beautiful babies month after month, I couldn't wait to finally send out my own. But there was one person I intentionally left off the mailing list: my father. My parents divorced when I was 8 years old. Most kids are sad when their parents split up and dream of ways to trick their mom and dad into getting back together. Me, I cheered when my mom told me we were moving out. My father had anger issues and abused substances. He took his rage out on my mother, my sister, and me. As a third grader, I'd already seen the kind of violence most kids my age only saw when they snuck into R-rated motives. Needless to say, I knew that when I grew up I wouldn't let my kids have a relationship with their grandfather, my biological dad.

Although he lived in another house, my father still managed to terrorize us from afar for years. Growing up, I continued to have contact with him through supervised visitations. He even showed up high and unwelcome at school functions. His desire to control my mother and his open disdain for my childhood "pudge" and acne tainted the memories I have of growing up.

When I was 13, I found my dad's stash of marijuana and hid it, but told him I had flushed it down the toilet. When he tried to catch me, I grabbed my younger sister to keep her safe before he could resort to his signature move: grabbing a butcher knife, cornering us, and threatening to slice our faces until we sobbed enough to his satisfaction. We called my mom from a crawl space under the stairs he couldn't fit into. We were used to hiding there — there were snacks, a flashlight, and some Barbie dolls we'd stashed there for company. The police eventually arrived. I went back into his apartment only to grab my teddy bear. After that, we didn't have to see him anymore, save for the times he randomly showed up our house or my dance performances and tried to assault my stepfather.

The last contact I had with him was five years ago. He called my house, his voice slurring. I cut him off and told him unless he could provide proof that he was clean and in therapy, I didn't have anything to say to him. He told me to go f*ck myself, then hung up.

When I found out that I was pregnant, some of my friends told me that it would be "selfish" of me to deny my kids a relationship with him, that just because he and I didn't get along didn't mean he was incapable of being a good grandfather. "It's been decades," they told me. "People can change." Those who acknowledged that what I went through was awful would try to tell me that my fears were no longer valid. "He's an old man now, he's not going to do anything to them," they said.

He may be too frail now to smash a dog chain through a windshield like he did years ago, but that doesn't mean the rage that allowed that to happen isn't still there. I chose not tell him that he was going to be a grandfather. My kids turned 4 a couple months ago and even though my biological dad lives less than 20 minutes from my mom, I still don't think he knows he has grandchildren. The last contact I had with him was five years ago. He called my house, his voice slurring. I cut him off and told him unless he could provide proof that he was clean and in therapy, I didn't have anything to say to him. He told me to go f*ck myself, then hung up.

I feel guilty over the decision at times. Not because I think he would have a positive influence on my boys, but because no one wants to bring a baby into the world knowing they already have a less-than-ideal family situation. As a mom, I want my kids to have better than I did. I want to give them the vacations we couldn't afford when I was their age, to make sure they never go to school hungry because we don't have money for food. And I can do that — I can give them a better and safer childhood than I had. Still, I can't change their linage. When they inevitably have to complete their family tree project for school one day, I anticipate awkward questions from their teachers and holes in their branches I'll have to explain. But I'm unwilling to pretend or play nice if it means putting my boys at risk.

I don't plan on keeping the truth a secret from my kids. One day, when they're old enough to ask why I call him by his first name instead of dad, I'll tell them an age-appropriate version of why we don't talk to my birth father.

I'm extremely lucky that my mom remarried a fantastic guy when I was in high school. My stepdad became my dad in every sense of the word. The relationship I have with him went a long way towards repairing some of the damage my biological father inflicted on my self-esteem. My sister and I asked my stepfather to adopt me when I was 27 as a combination birthday and Father's day gift, and every time he introduces me to people as his daughter I glow a little.

My boys know him as their Grandpa. He loves them dearly and spoils them rotten, so they're not wanting for an older male role model. That said, I don't plan on keeping the truth a secret from my kids. One day, when they're old enough to ask why I call him by his first name instead of dad, I'll tell them an age-appropriate version of why we don't talk to my birth father.

I know that by telling them that I have a different dad I don't see I'll be robbing them of some of their childhood innocence. My heart breaks over that. But it's a sacrifice I'm willing to make. The truth is that not everyone in this world is kind. It's sad that my boys will have to learn one of those unkind people is related to them, but I'm not doing them any favors if I conceal it from them.

I know that one day my biological father will die, and I'll have to live with the fact that I willingly denied him a relationship with my kids. But I'm OK with that. I firmly believe I'm doing the right thing.

Even if my amazing stepdad wasn't in the picture, I still wouldn't be calling my biological dad to meet us at the park. My desire for my kids to have a grandfather figure in their lives is outweighed by the danger I believe he poses to them. And beyond that, I don't believe children need a grandfather figure to be happy. Plenty of kids are born without living grandparents and grow to be well-adjusted adults.

Part of being a parent is having to make tough decisions based on what we think is in our children's best interest. I know that one day my biological father will die, and I'll have to live with the fact that I willingly denied him a relationship with my kids. But I'm OK with that. I firmly believe I'm doing the right thing and that some people are incapable of profound change. I'm generally not the type of person to hold a grudge, but even if I was able to forgive him, I'll never be able to forget. And I'd never forgive myself if I let him damage my boys the way he did me.