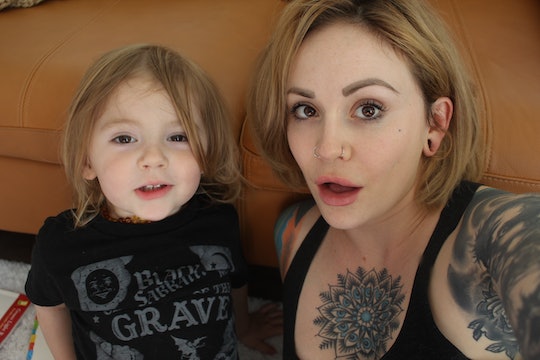 I Won't Pierce My Daughter's Ears

Every morning, my daughter watches me fluff my cheeks with a brush and adjust a silver ring through my septum. My septum is the oldest of my facial piercings. I've had it in my schnozz for 11 years. I had it professionally stretched, and I can fit cocktail straws through my nose. My partner’s earlobes are pierced and stretched to the point that they resemble onion rings, and my daughter’s dad is so heavily tattooed that I’m certain the palms of his hands and the soles of his feet are the only places where he doesn't have ink.

My daughter Bird has grown up in a heavily "modified" family. And yet, I have not pierced her ears, and I will not pierce her ears unless I get her explicit permission. Earrings on little kids are cute. Nail polish on tiny fingernails is cute. Playing dress-up with your mini-me can be a fun and bonding experience. But it stops being fun for both people when one of them is putting the other at risk of pain and injury.

I realize that many parents have no problem piercing their children's ears, and that it's part of many families' cultural traditions to do so. (In fact, just last year Gisele Bundchen caught flak for piercing her 7-month-old daughter's ears, even though it's a fairly standard practice in Brazilian culture.) While I respect their decision, I also think it's important to note that while many children have their ears pierced, the practice is not totally without risk. I spoke to tattoo artist and piercer Jasmine Wright, who told me that if a piercing gun is not properly sterilized, there's a risk of bacterial infection.

I would never put my child through pain and risk of infection for something purely cosmetic, unless she was old enough to understand those risks and make that choice for herself.

“Piercing guns force a semi-blunt post into the skin/cartilage and spread everything outward away from the hole...which can cause unnecessary trauma to the surrounding area," Wright told Romper. The Association of Professional Piercers (APP) backs Wright up on this, stating that "while piercing guns may seem to be a quick, easy and convenient way of creating holes, they have major drawbacks in terms of sterility [and] tissue damage."

Plus, getting a piercing hurts. Somewhere on my expired MySpace profile lives a selfie of my teary-eyed face, after my piercer had stretched my septum piercing. All body modification is painful, to a degree. I would never put my child through pain and risk of infection for something purely cosmetic, unless she was old enough to understand those risks and make that choice for herself.

In addition to my concerns about hygiene and safety, I don't believe it's the right choice for my daughter, because I don’t want to send a message that I prioritize aesthetics over autonomy. Kids should be taught bodily autonomy early, and that means parents should not decorate their kid's bodies just because they can. What are we teaching our little girls about their own independence, if we puncture their earlobes without their consent?

Little boys and girls are often pushed into activities and actions that their parents want them to do, even though they have no interest in them. But if you’re looking to nurture your child’s independence and creativity you must allow them to assert ownership of their body. For instance, my daughter just decided that she no longer likes to wear dresses. Even though my heart warms at the thought of her cute little chunky legs in a fluttery skirt, I wouldn’t dare fight her on this. She has to make her own choices, and I have to respect them.

In order to raise healthy children, we have to reinforce good habits for health and safety. That sometimes means making them do things they don't want to do, to protect them from harm. For instance, my daughter doesn’t like brushing her teeth, but I don’t want her little baby chompers to rot and decay, so I try to find creative ways to encourage brushing. But the line becomes more blurry when these choices are purely cosmetic. Ear piercing is not a necessary method of self-care, and so I don’t find any reason to mandate the procedure.

That said, it's possible that one day my daughter will grow up to want to get her ears pierced. So one day, I straight-up asked her: “Hey, Bird, do you want to get your ears pierced and wear earrings?”

I tried again. “Hey, Bird, do you want to wear jewelry on your face?” She cocked her head, annoyed that I'd asked her a second time. “I don’t want to," she replied.

I was proud of her. "Then you don't have to," I reassured her. It's her body. And if she wants to pierce her ears or shave her head or wax her toes later on in life, I don't care, as long as she's safe, happy, healthy, and educated.