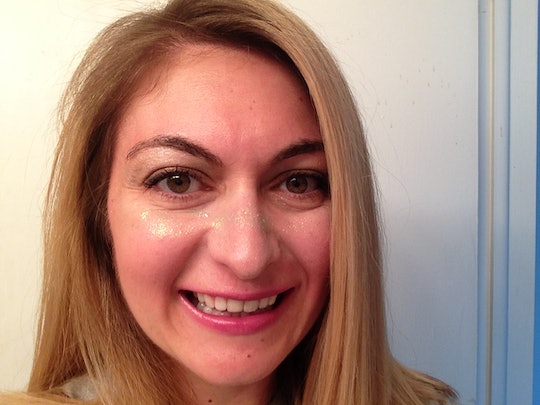 I Wore Body Glitter For A Week & This Is What Happened

Of all the best fashion trends from the '90s and early 2000s, the one I miss the most is body glitter. I couldn't afford the same clothes as Britney Spears or Christina Aguilera, but armed with a vial of loose glitter from my favorite jewelry and accessories store, I could still look like them. Body glitter was such a part of my beauty routine in high school and college that anyone who came in contact with me was guaranteed to walk away sparkling.

I'm the type who hates to throw anything away if I think it could be useful again one day, so I dug out one of my old polka dot caboodles and found my leftover body glitter. For one week I tried different ways to rock body glitter to see how wearing it made me feel and to determine if this is a trend that we need to bring back into fashion. (Because in my mind it is definitely a trend worth bringing back.) Here's what happened.

Day 1: All About The Eyes

I decided to start off my glittery week slowly by covering my eye lids in Stila's Kitten. This was one of my favorite shades of eye shadow in college, and some time after I became a mom I just stopped wearing it because I had this ridiculous notion that "moms shouldn't wear shimmery makeup," which, I've learned, is total BS. Women with kids can wear whatever the hell they want and whatever the hell they feel good in.

I had forgotten how much I loved this eye shadow and how good I felt wearing it. It's a small, superficial thing, an eye shadow, but the boost in confidence it gives me is huge. No one noticed that I changed up my look (not even my twin toddlers!), but I felt great and plan to keep using Kitten regularly.

Sparkly nail polish is something I love on other people but never have the confidence to try on myself. It looks really cool and way too complicated for someone like me (who doesn't paint their nails very often), but I decided to give it a try for the sake of this experiment. My glitter flecks came out more like globs and I'm sure my BFF, who's a salon owner, will call me after reading this with plenty of tips on how to do better with my glitter-polish technique, but I really liked how it turned out.

A manicure isn't a big deal in the grand scheme of things, but it made me feel pretty and put together. Plus the barista that always wears cool necklaces complimented me on it, so even in my leggings I felt like I was killin' the game — even if that game was circa 2003.

On day three, I really wanted to take things up a notch. So, I threw some glitter in my ponytail after using hairspray in hopes of creating a glittery mane. I was disappointed because there didn't seem to be that much glitter in my hair and from the look of my bathroom floor, the bulk of the glitter wound up there instead of my head.

Because I'm lazy, I didn't wash my hair that night and when I woke up the next morning my pillowcase looked like the tooth fairy had been shot. I used a lint roller to try and get what I could, but there's still a ton of glitter on the pillowcase now (days later), and I'm worried that if I wash it with the rest of my laundry, the rest of the clothes will end up sparkly too. I hate wasting things and don't want to just throw my bedding out, so naturally the pillowcase is crumbled in a ball in the corner of the laundry basket until I figure out how an adult would handle this. Oh well.

Edible body glitter was a big thing back in the day. I remember saving up to buy a super expensive strawberry lemonade-flavored body dust thinking I was daring and bold, but the closest I ever got to using it was swiping it on my own forearm and licking it off myself.

Glitter's such a small thing, but it made such a huge difference in my mood.

Still, the fantasy lives on, and this experiment seemed like the perfect excuse to bring some glitter into the bedroom. I dusted some pink loose glitter on myself and it looked great, but I got carried away and tried to layer some shimmery turquoise body dust on top of that to match my blue nighty. The turquoise dust turned my skin the same color as a character in Avatar, which was more startling than sexy. Despite the fact that my partner is a geek, getting down with a Na'vi isn't really his style. The stuff wouldn't wash off, so I pretended it was left over from a blue skin mask I have and went to bed unsatisfied in more ways than one.

I was determined to play out my glittery sex fantasy, so on day five I decided to try again with loose glitter layered on top of body butter. The technique worked wonderfully, and I came strutting out of the bathroom like:

I thought my partner would also have flashbacks to Britney in her hay day and be overcome with lust and we'd have a night filled with teenager hormones, only better because we didn't have to worry about a parent walking in on us. Instead, he looked at me wide-eyed and said, "Whoa, glitter." I struck what I thought was a seductive pose and asked if he liked it and the best he could manage was, "Um, it's a look, I guess." He was still game to get down, but it was hardly the passion-fueled night I had hoped for.

Instagram is full of posts with stylish glitter freckles, and though I've never been good at pulling off trends, I thought I'd give this a shot because it looked fun. It was surprisingly easy to brush some glitter on my cheeks over my face serum before it dried, and I was really happy with the results.

Rocking glitter freckles put me in a great mood. I felt just like Drew Barrymore at the end of Ever After and even tried to copy her Mona Lisa half smile until my son asked if I had a "boo-boo" on my lip. My other son looked at me quizzically and declared, "Mommy's sick." Guess they're not fans of the face glitter.

I spent the morning feeling like a fairytale princess, but by lunchtime my mood was less Cinderella and more evil Stepmother. The glitter had worked its way into my eyes and under my contact lenses — something they definitely don't show on Instagram. It took forever to get my eyes to stop itching and I realized that like lots of things on the Internet, glitter freckles are something that look really cool but aren't actually practical for everyday life.

Since this was the last day of the experiment and I thought not even Marie Kondo would approve of the fact that I'd held onto body glitter for almost two decades old no matter how much joy it brings me, I decided to just go nuts with it. I coated my body in glitter and sprinkled some on my cheeks (avoiding anywhere near my eyes) and in my hair as well. The end result was that I looked like one of the Cullen clan from Twilight. But honestly, I loved it.

Even though my kids didn't seem to care all that much and even though I was going to have to vacuum and wash every surface I came in contact with the day after, I got a big thrill from looking down and seeing my skin sparkle. Glitter's such a small thing, but it made such a huge difference in my mood. That afternoon, after my look had rubbed off a bit, I ran out to snag a coffee. I knew people would notice the glitter if they looked directly at me but I really didn't think my look was all that attention grabbing. The same barista that complimented my nails didn't seem to be a fan of my all over sparkle. I hadn't thought it was all that obvious, and maybe I'm paranoid, but it seemed like people were giving me a lot of space in line and I definitely saw that barista talking to a coworker and nodding in my direction.

Feeling like I was back in middle school again reliving the moments where the Cool Girls made fun of my baby backpack because it wasn't the right brand, I got out of there as fast as I could. Regardless of the embarrassment I felt while I was in there, the latte was still amazing and I am nothing without caffeine so embarrassed or not, I'll be back.

Is Body Glitter Still As Awesome As I Hoped It'd Be?

YEP! Unlike the butterfly clip, I'm still just as thrilled to wear body glitter as I was years ago. Wearing it made me feel young again, and I was more playful with my kids and less stressed out over to-do lists and responsibilities. Who knows if body glitter will ever fully make a comeback as a fashion trend, but that's not going to stop me from wearing it. Sure, being decked-out in glitter isn't exactly an everyday look, but don't be surprised to see my limbs sparkling this summer because I plan to mix some body glitter into my lotion on those days when I need a little extra dose of happy.

The one bummer about wearing body glitter as an adult versus when I was a kid is the cleanup. I thought my mom was calling me whimsical when she used to tell me that I was leaving a trail of glitter around the house, but now I realize she was trying to point out the giant mess I was making. I'll probably be vacuuming up the remnants of this experiment for weeks to come, but it was well worth it.