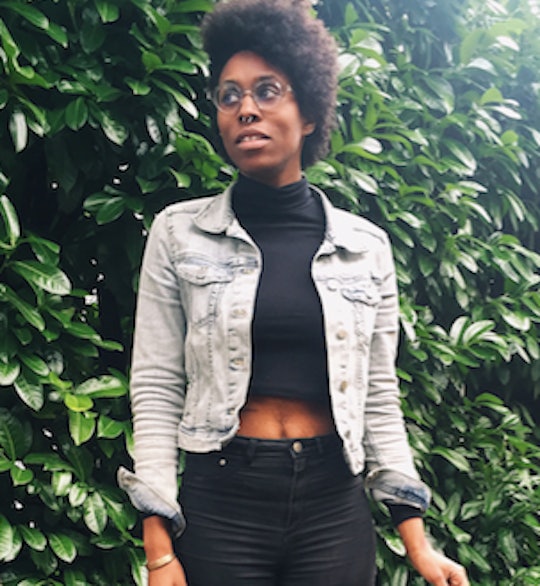 I'm extremely self-conscious of showing my stomach unless its at the beach, even then I struggle with it being too much. I love crop tops, because they're so comfortable, but after having multiple stomach surgeries, and children, I've always been iffy about wearing crop tops. I grew up very conservative, with parents always telling me to cover up. I grew up around the idea that girls and women have to be careful about how they display their bodies, because of how men will "stumble" or be "tempted."

Even though I no longer subscribe to that line of thinking, the message has stayed with me. But I've always believed that if I was going to have parts of my body showing, they needed to look a certain way — they needed to be "perfect." I bought into the idea that a perfect body does exist at a very early age, and because of that, I know that the perfect body is definitely not the one I have. I've had two c-sections, my stomach is covered in stretch marks, and I had kidney surgery about a year and half ago. I now have four tiny scars across my stomach, and one huge side scar. The first time I went soaking in a hot tub full of naked people, I was so afraid that my body might offend someone.

But my body is mine, as are its scars, and honestly, when has anyone ever thought about a scar as being conventionally beautiful?

So I decided I'd wear crop tops for a week to see how I felt about them, and how I felt about my body in return. I'm in a period of my life right now where I'm really trying to push myself outside of my boundaries. If it doesn't work, it doesn't work, but I want to be able to say that I tried instead of falling back into a cycle of shame over something I have no reason to be ashamed of. So this week I focused on giving myself and my stomach the freedom to be. I wore a crop top every single day, and here's what happened.

Despite not necessarily feeling confident enough to wear crop tops, I own a few. I usually pair them with pajama pants, or wear them under overalls or a dress. I can't help but buy them because they're so cute and on trend. Of course with the luck I have, when the first day of the experiment rolled around, it was raining, but I didn't deter from my plan to wear a crop top.

At one point while in the bathroom I just stood looking at myself in the mirror, which is something I find very hard to do for an extended period of time, yet I couldn't tear myself away. As weird as it sounds, I started talking out loud to myself about my body, actually admiring the scars and lines that have made my stomach the way it was.

My kids loved it! They kept touching my belly, particularly my belly button. I was really anxious to pick them up from school wearing nothing but jeans, a jacket, and a tiny shirt that exposed my midriff because I worried what the other parents would say and think about me, but surprisingly, no one said a thing.

By the end of the day, I was relieved to cover my belly again. I kind of assumed I would feel empowered, as I often do in challenging myself, but I was just happy I had completed the first day.

Day two was no easier. I dreaded putting on another crop top and of course, in true Portland fashion, it was raining again, and I was feeling a bit bloated. I stayed in bed for as long as possible, but eventually I had to get up and live. This time around I picked out a crop top that was a bit of a turtle neck with long sleeves. I actually liked it, but was still unsure about this whole thing of showing my entire stomach to strangers thing!

I tried to evoke confidence, but every time I was out in public, I kept thinking that EVERYONE was staring at my belly, wondering why it was covered in scars. No one was really paying attention, but I was convinced they were. I thought perhaps my partner or friends would make a comment about all of the skin showing, but no one did. I felt like I was putting myself out into the world but because no one said anything, did they even see me?

When day two ended, I began to think a little differently about how this experiment was going. I realized, perhaps, that showing off my stomach maybe wasn't as big of a deal as I was making it out to be in my head.

I felt a little bit better when I woke up and got dressed on Wednesday. I wasn't as concerned about what people thought about how I was dressed. Instead, I was more concerned with how I perceived my body. At one point while in the bathroom I just stood looking at myself in the mirror, which is something I find very hard to do for an extended period of time, yet I couldn't tear myself away. As weird as it sounds, I started talking out loud to myself about my body, actually admiring the scars and lines that have made my stomach the way it was.

I've just never looked at my body and thought of it as beautiful.

Something about doing so made me feel a little bit less afraid, a little more proud, and a little more relaxed. I realized that if I am going to expect anyone to treat my body with respect, I have to start with myself. If I don't love what I see, how can I demand anyone else? Of course after this, someone pointed to the big scar I have on the right side of my body. At first, when they pointed, I was like "OH GREAT! LOOK! EVERYONE IS UNCOMFORTABLE!" But what they asked was that it was an "amazing scar, how did you get that?!"

I was definitely taken aback and shocked. I didn't know how to respond at first, but eventually I was able to tell the story of my surgery. I'd never looked at my scars as badass or amazing, so it was cool to have someone see them in a way. To me, they're just something that happened. To someone else, it looked like something I survived. A mark that made me who I am. It turned out to be affirmation I didn't even know I needed.

Four days into this experiment and I was beginning to see my body in an entirely different way. I've never disliked it — it's performed miracles and carried me through two deliveries and surgery. I've just never looked at my body and thought of it as beautiful. Yet each day that passed gave me new reason to to appreciate and respect and be proud of my stomach the way it was. Because there was no rain, I wore a crop top without a jacket, and I felt free. I felt free of a fear that has stayed with me from the time I was little until now. I had the freedom to see my body and like it exactly how it was (and is). And to celebrate, I went out to a bar on Saturday night. It marked the first time I was in a room with multiple people in a tiny shirt.

Perhaps the drinking helped, but I think it was the most comfortable I had ever felt. People thought my scar was brilliant, and other than that, no one paid any mind to what I was wearing, or what my stomach looked like. It gave me this sort of rush, and made me feel extremely proud of myself for how this week had gone.

My kids loved when I show more skin. They kept tracing my scars, and rubbing my belly. They wanted to know the places on my body where they'd been, and where they'd come from. I adored it. Prior to this experiment I'd never really thought twice about what it would mean for my children to see me in "less" clothing, with part of my body showing in a way that wasn't overtly sexualized. But sharing that moment together with them that was so much about them as it was me was something I'll remember always.

On my last day, the rain helped usher this experiment to its end, and I came full circle by wearing the same crop top I started the week in. I thought it was fitting. I missed my other t-shirts, but I wasn't so nervous about the crop tops anymore. Even more so, I wasn't so nervous about my stomach being out in the open anymore. I was proud to show off my stomach. Being able to go out to public spaces without holding my arms over my stomach, or cringing at lifting my arms up as something I've honestly never felt before, and I was OK with just being there, OK with being me.

Even in all of my feminist beliefs and glory, I still cling to antiquated and conventional standards of beauty. Despite appreciating my body for the things it's done and can do, I've never really been able to put myself out there — both physically and mentally — and feel comfortable. I've never really seen my body as something that's worthy of being beautiful or good.

But over the last week, I learned that my body isn't something that needs to be toned and fit for the consumption of others. It's perfectly acceptable exactly how it is. I also learned that my harshest critic on my body is me. I'm the one who has been telling myself that I should look better, be better. Not a single person stopped me this week to tell me that I should cover up or that I should be ashamed by the way my stomach looks after two c-sections and kidney surgery. No one was disgusted by my appearance or questioned my choices. No one made me feel less than or worthless. Instead, that came from me. I was sending the wrong message into the universe without realizing that the way I look and feel right now is the best I'll ever look and feel, and tomorrow, I'll only feel better.

More Like This
These 15 Last Minute Valentine’s Day Gifts Are Total Winners
Fun, Sexy Maternity Lingerie, For When The Mood Strikes
9 Aquarius Nail Designs As Unique And Artistic As You Are
40 Valentine's Day 2023 Outfit Ideas
What Parents Are Talking About — Delivered Straight To Your Inbox