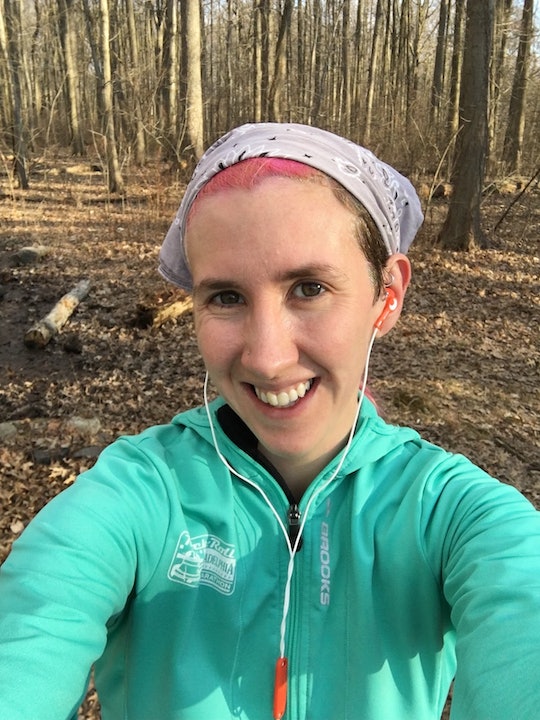 I Wore Pads While Running & This Is What Happened

To be totally honest, I’ve never given much thought to running with my period. I mean, I've done it. I’ve been running and racing for five years, and marathon schedules don’t always sync up with my cycle. But I usually run said races wearing a tampon, dark, sweat-wicking fabrics, and a prayer. (One hell of a prayer.) However, when Kiran Gandhi ran the London Marathon while free bleeding last spring, I started wondering whether or not there's a better way to run while on my period. And then that led me to question whether or not there's one tried, true, and comfortable way to run a race when you're on your period.

I know what you're thinking: comfortable period? That's absurd. And you'd be right, for the most part. Periods are rarely pleasant, and running with your period is never comfortable — at least, not in my own experience. Running with a tampon that's slipped or shifted position or becomes much too full and heavy is beyond irritating. In the few times I've done it, it's felt like I'm trying to hold a set of silverware between my legs while maintaining your stride. It's pretty damn impossible.

Personally, I feel like free bleeding is unsanitary and unhygienic and hazardous to fellow runners, so that option is pretty much off the table as far as I'm concerned. And though it's not exactly the best choice for me, I was still interested in finding out whether or not it would be comfortable to run wearing something other than a tampon during a race. What if there is a easier option, a more reliable option, than a hope and prayer that everything stays put and doesn't bother me? What if that option is one I've actually ignored for years and years?

What if the best option out there is actually a pad?

The Experiment And The Gear

Before embarking on this experiment, I stocked up on essentials. I bought a pack of ultra-thin overnight protection maxi pads — with wings! — I broke out my Under Armor underwear and compression tights, and I stocked up Aspirin and Ibuprofen. The undergarments and compression tights would help keep things in place, the pills would help keep my cramps at bay, and the high absorbency pads with wings meant maximum protection. Once I had everything set, all I could do was wait for my period to start so things could begin.

I had no idea what to expect from this experiment. What would running with a pad feel like? Would it be more or less comfortable than a tampon? Would I like it? Would it leak? And while I was nervous, I was also intrigued... and cautiously optimistic. (I mean, it couldn’t hurt, right?)

So I waited and waited. I counted down the days and waited some more.

And then it finally happened! I awoke bloated and cranky. My back was sore, my stomach felt as though it was being tied in knots, and my colon was — how shall I say this? — hyperactive. I was getting my period. But instead of pulling on a pair of sweatpants or stepping into some loose-fitting shorts, I put on my purple Lycra panties, a pad, and my compression leggings, I laced up my sneakers, and I headed out the door. It was go time.

The first few miles weren’t bad. I wasn’t bleeding yet so even though the pad was in place it wasn’t wet or heavy and I wasn’t worried about leakage. And although I was cramping, that “runner’s high” kicked in shortly after the one-mile mark and the pain seemed to melt away. (Endorphins really are nature's painkillers.) So overall, things weren’t too bad as I got into the run. But sometime after mile four, about 40 minutes into my eight-mile run, I started to become hyper aware of my pad because it shifted and because I was sweaty. Who knew pads weren’t moisture-friendly. I kept running, but there were numerous times during that last stretch when I found myself tugging and pulling at my crotch. Oh, and I was scratching, because when sweat is trapped in your nethers, it makes you terribly itchy.

Even though the run itself was a success, the pad wasn’t as comfortable as I was hoping.

Running With A Full Flow

Even though I was no longer cramping, I was still running with a full flow so I decided to keep this run short. I was sick (thanks to the cold my daughter so lovingly brought home from daycare), but I kept day two's run short and sweet because I was afraid of leakage. I worried about the added bulk and weight even though my previous run went well, and I was still terrified about chaffing down there. (A common runner problem.) So I mapped a three-mile route and headed out the door.

The good news is I didn’t leak. The pad wasn't too heavy or wet, and I didn’t chafe. However, that was the only good news because since today was a short run — at least for me — I decided to do some interval training. This meant that I ran my usual pace for three to five minutes and then I broke into a two-minute sprint. And the sprint was what did me in. When I was sprinting the pad once again shifted in its position and it made things terribly uncomfortable. My underwear and the pad got tangled up and twisted, and the edge of the pad, where it should've been stuck to my underwear, was now sticking to my leg. To top it all off, the whole damn thing was pinching me. It was awkward, uncomfortable, and to be completely honest, it totally sucked.

Running At The End Of My Cycle

With my previous runs psuedo-successes — if you ignore the pinching, I didn’t chaff and I didn’t leak — I decided to take this one a bit slower and a bit further. Two miles further, that is. For five miles, I ran a comfortable but steady pace and best of all, I ran without an ounce of leakage. I made sure to adjust myself as necessary. (At this point in the experiment I didn’t give a damn if anyone saw me readjusting for comfort.) But, ironically, I didn’t have to readjust myself that much on this particular run. For whatever reason, this run went off pretty comfortably.

Unfortunately, too many variables changed this day to know why: Was it because I had a lighter flow or because I took the run at a slower pace? Was it the pants I chose on this day, or the underwear? I'm not sure which was to blame (or thank), but whatever stars aligned to make this possible, I was really glad.

When all was said and done, I thought this experiment was a relative success. Will a pad be right for me on all of my runs? No, probably not — especially those longer, faster, interval-based runs. (Because, as I learned, increasing my speed and/or distance also increased my pain and my discomfort. It also lead to shifting, pinching, and itching.) But was a pad a viable alternative? Hell yeah.

Ignoring those first few missteps — the pinching, itching, twisting, shifting — there wasn't one occasion when I leaked or when the pad felt heavy or overwhelming. Even though wearing a pad on a run was clunkier than a tampon, I found it a bit more comfortable. I never once worried about it falling out, which was a nice change of pace, considering that's a common concern I have when wearing a tampon. In fact, this experiment was such an overall success that next month I'm planning on giving it another try. I may not be a total convert, but I'm definitely inching my way closer.