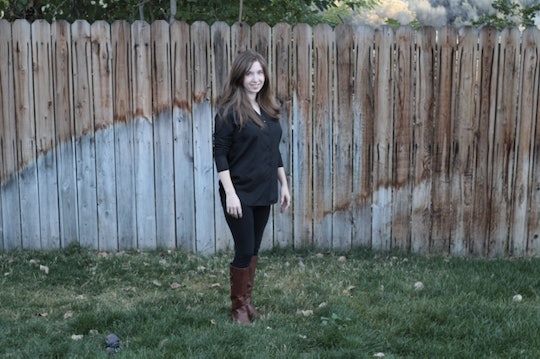 I Wore The Same Outfit Every Day For A Week, & Here's How People Reacted

After recently doing some serious decluttering in my closet, I have been trying to figure out my personal style. Spending the last six years either pregnant or postpartum left me with a really weird hodgepodge of clothing in my closet, ranging from maternity wear to stuff I wore to the club when I was 21 (the last time I was pre-baby). When I finished my cleaning spree, there wasn’t much left, but what I did have, I loved. It was minimalist and classic, which is a style I can certainly learn to live with.

Lately I've read a lot about the science behind wearing the same style clothing over and over again. Everyone — from Steve Jobs to Michael Kohrs to our own president — has been touting the benefits of wearing the same outfit in repetition. In an interview with Vanity Fair, President Obama said:

I'm trying to pare down decisions. I don't want to make decisions about what I’m eating or wearing. Because I have too many other decisions to make.

It sounded really attractive. As a mom raising three kids in single digits, I make decisions all day long about everything. Getting dressed in the morning is the first in a long line of decisions I'm responsible for — and there are some days where I don't even need to leave the house. Granted, the president is making decisions that affect the lives of millions of people, so I get where he's coming from by needing to make one less decision, but I'm making decisions for four people — and that's still a lot. Experts warn of the "fatigue of decision making," so paring down what I was deciding on what I would wear every day seemed like a great place to start.

Not only did a cleaner, simpler closet feel easier to manage, but it also gave way to my favorite pieces. Pieces I could wear day after day, if I wanted.

I decided to test my love for my new minimalist wardrobe by sticking to one outfit for an entire week. It seemed a little taboo, but apparently wearing one signature look is something French women do all the time. Who am I to question French fashion when mere days ago I had a sequined mini skirt hiding in my clothing collection? Wearing one outfit is also popular among the highly successful, like Mark Zuckerberg, who choose to wear the same thing every day to free up their minds for more important work. I picked out one of my favorite fall outfits: black leggings, a black button up, and some riding boots. I wore it every day, all week long, and this is what I realized.

1. I Was More Confident

The first day of the experiment I was feeling pretty confident in my look. Because I had chosen one of my favorite outfits to wear, it was easy to feel good when I was out and about in new situations. I found myself going out more often, to book readings and dinner with friends, because I knew I was ready to go at any time for any occasion. I might’ve changed up my makeup or accessories to match the event, but no matter what, I felt comfortable (seriously, leggings and a long button up are SO COMFY) and stylish. I also enjoyed seeing lots of different people, who had no clue I was wandering the city in the same outfit day after day. I got lots of compliments on how good I looked from friends I reconnected with, and I think it stemmed from how good I felt about what I was wearing.

I found that I was always happy to get dressed in the morning, knowing I would be comfortable and in one of my favorite outfits. Even though by the end of the week wearing only one outfit got a bit monotonous, I found that I felt good most of the time, no matter what I was doing or where I was going. I was wearing something I truly loved, rather than something I just threw on because it was on the top of the laundry pile. Getting dressed was a more intentional act, and it gave me a jolt of happiness I wouldn’t normally have upon entering my closet.

One thing I found while wearing the same basics day after day, was that I was more inclined to play up my look with makeup or jewelry. I normally feel like doing my nails or deciding what accessories to wear with an outfit is too much effort, but since I wasn’t deciding on a new outfit every morning, it was sort of fun to add pieces for extra effect. I used to love putting together looks when I was younger (I more time, and no kids), and this brought back some of that styling joy I used to have. I wore brighter lipstick and played with heavier statement pieces. It was fun to focus on these aspects of my style rather than standing in front of my closet trying to figure out what to wear.

3. No One Really Cares What You’re Wearing

While I felt super good on day one, by days two and three, I was sort of dreading preschool drop off and pick up. I found myself hoping that no one would compliment me on my outfit, lest they notice that I was wearing the same thing the next day, and the day after that. I wondered what people would think about my single outfit. Did I ever wash my clothes? Did my entire wardrobe get destroyed in a fire? Who knows. While someone did comment on my boots, no one seemed to notice that I was wearing the same thing day after day. I realized most people are too consumed with their own lives to take too much stock in what you’re wearing when you take your kid to school. Even my husband failed to notice, even though he noted how nice I looked on a couple different occasions. The only person who was worried about me wearing the same thing day in and day out was me. By the end of the week, I realized, as long as I was happy with my look, that’s all that really matters.

4. If You’re Going To Wear One Outfit All The Time, Have Two Of Them

By the end of the week, I was exhausted by the amount of laundry I had to do to keep up with my singular look. I realized that my minimalist look required more than minimal effort to keep up daily. It was as if my infant knew that I needed to keep my shirt clean, and therefore made certain that every time he spit up, it landed all over my button-up. I was doing laundry every single day to keep my outfit clean, and I was concerned what I was wearing would get worn down from so much wash and wear. I realized that next time I found an item of clothing I truly loved, I should probably get a couple. It’s good to have a backup so you don’t have to say goodbye to your favorite outfit too soon.

Was Minimalist Fashion Right For Me?

While I fully expected to feel grossed out by my outfit by the end of the week, I found myself more in love with it than ever. Wearing one easy, classic look not only made getting dressed easier, but also more satisfying. I found that I was more comfortable with my “bare” post clean-up closet, and felt that I probably still had more than I needed. I’ll probably go through my clothes again soon, but after my big cleanup effort, I’m not quite ready to revisit closet culling just yet. In truth, I could probably get by with just three or four classic looks. Does that mean I’m going to gut the rest of my closet and live in a totally minimalist fashion? Probably not. I still like to have options when I open my closet in the morning. But it does mean that I am more comfortable claiming my style as my own, and finding joy in fashion again as a young mom with three kids.