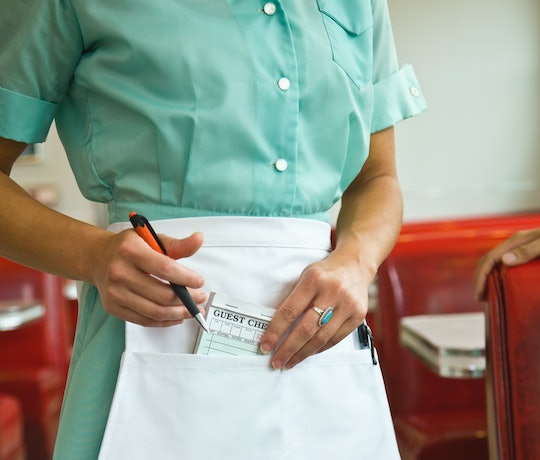 It was just a few weeks before Christmas when I got the email from my boss telling me that they were putting our remote editing jobs on hold till the new year. The contract was ending immediately with no explanation, no warning, no apology, no “happy freakin' holidays.” Just finish up whatever you’re working on and turn in your timesheet. I would begin my job search on January 2 when the country re-opened.

In January, I was back at work, then laid off again. Then back to work. And then let go once and for all. Even though I had been looking for another job in my field, nothing had come through. So now my husband and I were staring at a pile of bills that were not going to get paid by his Uber gig alone.

I took a job hostessing at a burger joint at the mall. The manager was so young I almost patted him on the head when he told me he’d pay me the princely fee of $12.50 an hour because I was “worth it.” Damn right I was worth it, I was worth a whole lot more, but this is what you get paid at the mall in Jersey, babes, get over it. He also told me that we would talk about my schedule when I came in to train. OK, I was thinking, I just need to get the job and the hours will be fine. At least it’s not going to be too late at night because it’s the mall.

Coming up on my second day of training, I realized that I was going to be working a mix of day, night, and weekend shifts while trying to watch two young kids as a household of two working parents. Not the day gig that I was hoping for, but my husband and I decided that we’d make it work. He’d drive while I was home and stay with the girls while I worked. That plan worked until my second day of training fell on a weekend — the days when my husband makes the most money.

We found a friend to watch our girls for six and a half hours for $50. That’s about $8 an hour for two kids. I dropped off my girls with $5 worth of snacks and drinks because I couldn't just let them sit there all day with nothing to eat, and from there I took the train to work for $2.75.

The state initially stopped my unemployment payments because I 'quit' a gig.

I was at the job with a college student training me when the manager, another young person, sashayed over to ask us if we could stay for the second shift because the evening hostess had called out. There was no way my girls could stay at my friend’s another six hours and, anyway how much more would that cost? My coworker said yes immediately and later asked why I couldn’t do it too. First of all, none of your business, and second, “I have two kids,” I told her, kinda embarrassed to be the mom of a certain age, working at a burger joint. I finished the shift with a complementary buffalo chicken burger, truffle fries, and a shake that I figured my girls would love, and spent another $2.75 on the train home.

It wasn’t until the next morning when my husband and I got to evaluate my take-home pay that reality set in. After childcare, snacks and transportation I’d spent a whopping $60.50. I made a measly $62.50, which left me with all of $2.50 before tax. Once Uncle Sam took his cut, I made less than zero and actually paid to work.

I quit the gig for obvious reasons and the kicker is the state stopped my unemployment because I “quit” a job. Fortunately, my lack of child care was deemed a valid reason and it was reinstated just before the wave of shutdowns triggered by the COVID-19 pandemic. As of the end of April, NPR reported more than 30 million unemployed people in the U.S., and nearly 60% of jobs lost in the pandemic were held by women. The phone lines for unemployment offices in New Jersey and elsewhere have been jammed, and it has become crystal clear just how non-existent the social safety net is.

If there’s a silver lining to my own story it’s that I was able to use this time sheltering-in-place to come up with a stay-at-home business that has already yielded me my first client. But I realize others aren’t so lucky. When this pandemic ends and the economy recovers it will likely leave behind the most vulnerable workers — women, mothers and those without college degrees who must make it work on less than $12 an hour.