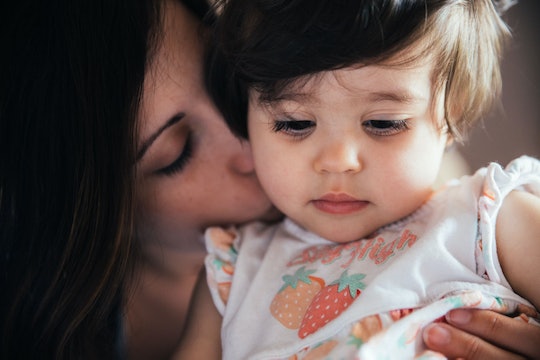 I Worry About Speaking Spanish In Public, But I’m Doing It Anyway

My personal experiences with racism reach as far back as childhood, when I was told “go back to your country.” In adulthood, the racism pops up in unexpected places. A man recently pulled up beside us at a red light and yelled “what the f*ck kind of music is that?” when he heard Taki Taki on my radio. There is story after story of people told to "stop speaking Spanish," but for Hispanic Heritage Month, I am going to do it anyway, for the benefit of my girls.

This is harder than it sounds.

Couple the political climate, wherein child refugees from Central America have been detained in cages, with my personal experiences with racism and a diagnosis of generalized anxiety, and the result is a woman who feels scared to be a Chicana. It’s only recently, after going back to therapy to work on my anxiety that I’ve realized the power I’ve been giving to ignorance and racism. No one should be scared to be their authentic selves.

So I am going to celebrate the hell out of my culture during Hispanic Heritage Month by speaking Spanish to my kids in public. I’m proud to be a Chicana, and my girls need to see that. I hate to admit that I’m not fluent in the language, although I can understand it and used to respond in English when my grandma spoke to me in Spanish. Thankfully my tias, close friends, and mom speak to my girls in Spanish when I don’t remember how to pronounce a word.

My girls work Spanish into their conversations every now and then, surprising us by requesting “helado,” “dulce,” a “manzana” or “naranja.” I love how much pride my youngest daughter has when she tell s me she knows how to speak Spanish and whispers “Día de los Muertos.”

I’ve always been proud of my heritage and have instilled the same pride in my daughters. When their public school focuses on a specific cultural tradition and overlooks other cultural celebrations, I remind them about the history of Día de los Muertos, and encourage them to wear traditional Ballet Folklorico dresses to celebrate their culture. As a proud Mexican-Americans, or Chicana, I continuously remind my daughters of the contributions Hispanics have made to America, and teach them about their culture. Unfortunately Donald Trump’s constant bashing of Hispanics, and the hate crimes fueled by his racist rhetoric — the Washington Post found a 226% increase in hate crimes in counties that hosted a 2016 Trump rally — have made me question whether it’s safe to be brown and proud.

I’m determined now more than ever before to remind my girls about where they came from.

Donald Trump’s use of racism to stoke his base has pushed my anxiety levels to the max. Trump’s words, the media’s constant coverage of his racist-statements-of-the-week, and his supporters' inability to admit we have a racist in the White House, makes me feel like I have a giant target on my back. If you’re brown, then you’re hated or to blame for whatever is going wrong in this country.

And I’m not the only one who feels this way. According to a Race in America 2019 PEW report, 58% of Hispanics report experiencing discrimination since Trump took office.

Aside from speaking Spanish, I plan to find other ways to celebrate the history, culture and contributions of American Latino communities.

They are already so proud to show off the skirts their Tio Arturo brought them from Guadalajara, Jalisco and La Piedad, Michoacán. They know all about Frieda Kahlo and Matilde Montoya thanks to the Good Night Stories for Rebel Girls books, with my eldest girl requesting to know more about these women. It’s moments like these when I sneak in information on Sonia Sotomayer, Rep. Alexandria Ocasio-Cortez, and their Tia Helena María Viramontes, a Chicana author who writes of marginalized communities, inequalities and racial discrimination.

This year Hispanic Heritage Month is more meaningful than in years past. I’m determined now more than ever before to remind my girls about where they came from, and teach them about the extraordinary Hispanic men and women who overcame, and continue to overcome, adversity. This celebration is a wakeup call to never let anyone question my identity, or fear speaking Spanish in public. And if anyone has a problem with it, that’s their problem not mine.