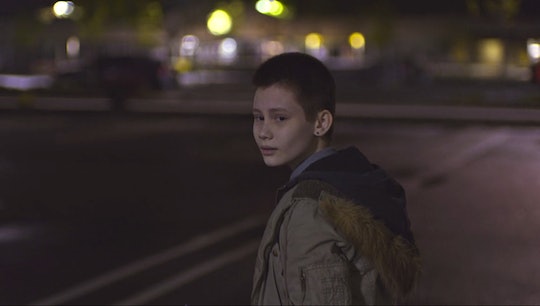 Ian Alexander Discusses His Journey On 'The OA'

Netflix's new sci-fi drama, The OA, was amazing for various reasons. It was a great mystery, it asked hard hitting questions about life and death, and there was even a little bit of romance. However, what, or rather who, really caught many fans' attention was The OA character Buck Vu, played by newcomer Ian Alexander. Buck is a transgender male, who's father consistently ignored his gender identity by referring to him as Michelle, his birth name. Romper had the amazing opportunity to interview the actor and talk to him about his role on The OA and what it means to him. Additionally, Alexander opened up about his part in the trans movement, reaching a new audience, and his plans for the future.

While Hollywood has definitely taken great leaps forward in the past few years for the LGBTQ community, the representation of trans characters is still lacking. Although trans characters are becoming more prominent in shows and movies, it's still rare for the character to actually be played by a trans actor. More often these roles go to cisgender actors, like in Transparent and The Danish Girl. That's why fans, and Alexander himself, were excited to see him in this role.

"I'm so honored to be a part of the movement and I really hope in the coming years that Hollywood and the industry progress and that we see a lot more representation and a lot more actors who are being cast correctly," the 15-year-old actor says.

Overall, the response to Buck and Alexander's acting debut has been overwhelmingly positive and Alexander is most proud by how the show is reaching people who may not otherwise engage with the LGBTQ community. "The OA isn't catered to a LGBTQ audience, so it's reaching people who may have never seen a trans character before," Alexander says. "It's truly interesting to see their reactions as well and [how they're] educating themselves, learning about the trans community through my character. I think that's fantastic."

Alexander is now seen as one of the breakout stars from the show and has garnered thousands of fans since the series began streaming. Fans have even taken up a call for him to appear in the next Star Wars movie with the hashtag #IanForStarWars.

As of right now, Alexander doesn't have any future projects lined up, but he's excited for what will come next. For now, though, he's just like any other 15-year-old, focused on finishing high school and getting good grades.

You can watch Alexander's outstanding performance in The OA on Netflix where it is now streaming.