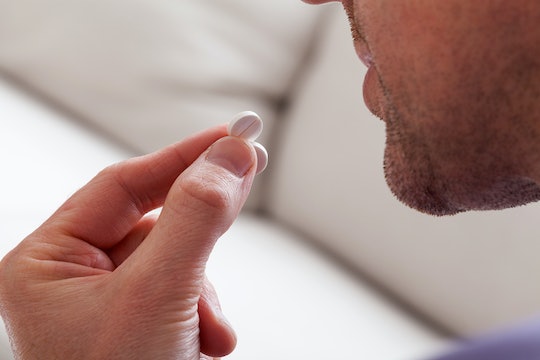 Everyone has, at one point or another, taken an over-the-counter pain reliever to ease aches and soreness. In fact, athletes take ibuprofen daily to deal with the pains that come with their profession. But frequent use of OTC pain relievers may come some risks to men's reproductive health. Namely, ibuprofen could affect male fertility, according to the latest research.

A new study published in Proceedings of the National Academy of Sciences found that regular ibuprofen use could lead to compensated hypogonadism, a hormonal condition that can cause infertility in men, according to CNN. Compensated hypogonadism can also bring on erectile dysfunction, depression, bone loss, hair loss, and loss of muscle mass, according to the Mayo Clinic.

A team of French and Danish researchers recruited 31 young men, aged 18 to 35, for the study, 14 of whom took 600 milligrams of ibuprofen twice a day — the same daily dosage as taken by athletes, according to CNN. The other 17 men received a placebo. What the researchers found is that, after 14 days of use, men in the ibuprofen group had higher blood levels of luteinizing hormone, the hormone responsible for producing testosterone. Although there were higher levels of luteinizing hormone, testosterone production didn't increase. compensated hypogonadism, according to the study.

The researchers also noticed other disruptions to hormones at two weeks and 44 days of ibuprofen use, according to TIME. These results, they say, suggest wide-ranging symptoms of hypogonadism.

As part of the study, the team used organ donor samples to test the direct effects of ibuprofen on testicles, TIME reported. And what they discovered is that the testicle samples produced less testosterone after just 24 hours when exposed to similar ibuprofen doses given orally, according to TIME. Testosterone production decreased further with higher and longer ibuprofen exposure.

So what prompted this particular part of the study? David M. Kristensen, study co-author and a senior scientist in the Department of Neurology at Copenhagen University Hospital, told CNN,

We wanted to understand what happened after exposure (to ibuprofen) going from the global human physiology over to the specific organ (the testis) down to the endocrine cells producing testosterone.

Of course, the study doesn't come without detractors. The Consumer Healthcare Products Association, a trade group representing the makers of over-the-counter drugs and supplements, criticized the study's sample size and span of ibuprofen use in a statement to TIME, noting that,

Every day, millions of Americans rely on over-the-counter (OTC) ibuprofen to treat pain and/or fever, and they can rest assured that the safety and efficacy has been well documented and supported by decades of scientific study and real-world use.

But Mike Tringale, a spokesman for CHPA, told CNN that the trade group "supports and encourages continued research and promotes ongoing consumer education to help ensure safe use of OTC medicines."

The researchers behind the PNAS study do recognize that there are many questions left unanswered about ibuprofen's effects on reproducitve health, according to CNN. But, as study co-author Bernard Jégou, director of the Institute of Research in Environmental and Occupational Health in France, told the outlet,

[T]he alarm has been raised now. If this serves to remind people that we are really dealing with medical drugs -- not with things which are not dangerous -- this would be a good thing.

More Like This
New Study Finds Brains Of Teens Who Lived Through The Pandemic Aged Faster
My Toddler Ate Play-Doh, What Happens Now? Don’t Freak Out
Here’s What To Do If Your Baby’s Nose Bleeds After Suctioning
When It’s Safe To Bring Your Newborn To A Restaurant, According To A Pediatrician