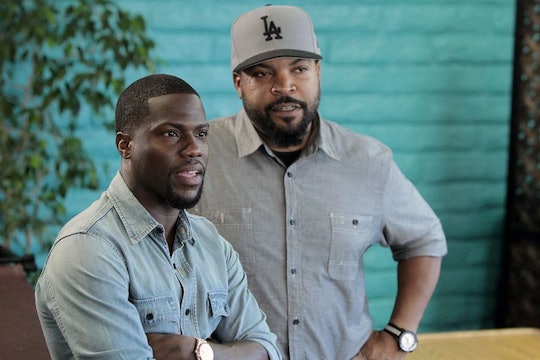 The Bachelor might be known for a swanky mansion, beautiful people, and glamorous dream dates, but on Monday night’s episode, the first solo date takes place at...a hot tub store? Surprisingly so — and in case that wasn’t already strange enough, Ice Cube and Kevin Hart joined Bachelor Ben’s date! The two stars made a cameo appearance during the episode to help Ben in his quest to find his soulmate — and, uh, also to promote their new film, Ride Along 2 — tagging along on Ben and Caila’s “cheap date”. Lucky for Ben, Caila seemed totally game to accommodate their third and fourth wheels (at least this time she knew they weren’t also vying for the same guy), and naturally Ice Cube and Kevin Hart were in fine comedic form.

But funny as they may be, they were still totally crashing their date. Given that one-on-one time comes at a total premium for these smitten ladies, it’s hard to imagine that Ben and Caila really had much of an opportunity to actually get to know each other very well thanks to their celeb companions — and given that they were literally sitting in a hot tub in the middle of a hot tub store it couldn’t have felt very romantic either.

It turned out that the "cheap date" was actually Kevin Hart's idea, and followed through on his thriftiness by encouraging Ben to pick up some roadside flowers (complete with necessary haggling!). Ice Cube's advice was equally questionable — suggesting Ben pick up some hard liquor and condoms on the way as well. At least the moment had the audience laughing, right?

If Caila sticks around (which she should because, hello, what a good sport!), let’s hope that her next date with Ben is much fancier.