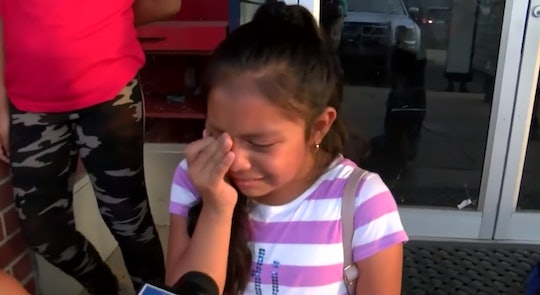 ICE Raid In Mississippi Results in More Than 200 Missing Students

On Wednesday, Aug. 7, hundreds of suspected undocumented workers were arrested by ICE agents in Mississippi — resulting in the largest single-state raid in U.S. history. As you can imagine, the impact this has had on the surrounding communities has been enormous. Children, who were at school at the time of the raid, had no idea if or when they would see their parents again. Many of them plead through tears for the government release their moms and dads. And unsurprisingly, the ICE raid in Mississippi resulted in more than 200 missing students the following day.

The sweep of food processing plants led to at least 680 undocumented immigrants being detained in six Mississippi cities on Wednesday, CNN reported. Videos of crying children quickly circulated online, including this one of an 11-year-old whose father was detained. "Government please show some heart, let my parent be free with everybody else please…" Magdalena Gomez Gregorio told CBS News between sobs. "…My dad didn't do nothing. He's not a criminal."

More than 300 of the detained workers were released by Thursday with notices to appear before immigration judges, according to WVTM 13. But the damage to the community had already been done.

“We’ve reached out to them,” said Tony McGee, superintendent of the Scott County School District, told BuzzFeed News. “Part of it is fear, the fear of coming to school. There is an uneasiness of moving around the community, moving about schools, but we are trying to reassure them: School is a safe harbor.”

In light of rumors that ICE officers had plans for showing up and taking children whose parents were arrested into custody — in addition to claims that ICE agents were spotted in a different area of the state — it's no wonder so many students have been missing from school.

“It’s a sad situation. I’m a mother and I’m just imagining my child in that situation. It’s heartbreaking,” Beverly Luckett, a spokeswoman for the Canton Public School District, told BuzzFeed News. “We need to make sure children are taken care of, and we are trying to reduce the trauma this could cause.”

As WVTM 13 reported, the massive raids in Mississippi are expected to have long-lasting effects on the community. A store owner who serves Latino poultry plant workers is afraid that he'll be forced to close. The CEO of a local bank has expressed the raid will most likely affect every business in town. And clearly, area schools will be tasked with re-building trust with families involved. As for the families — and especially the children — I can only imagine the lasting trauma something like this has caused. It's truly heartbreaking.