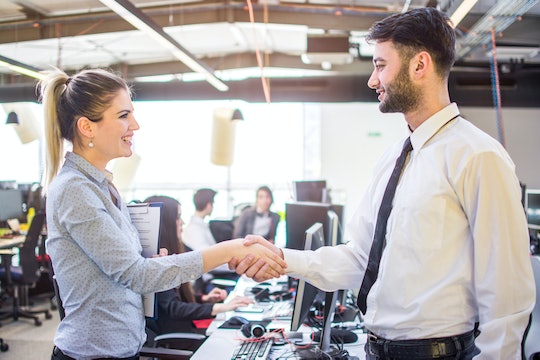 Iceland Makes It Illegal To Pay Women Less Than Men, & Twitter Has A Lot Of Feelings

In light of a law that went into effect at the turn of the new year, it seems Iceland is showing the world what happens when women comprise nearly half of the law-making body. That's because the country has now guaranteed by law that employees will be compensated equally — regardless of their sex. Starting on Jan. 1, Iceland made it illegal to pay women less than men, and Twitter has a lot of feelings about this.

On Monday, ThinkProgress reported that both public and private employers with 25 employees or more are now required to obtain government certification of equal pay policies. And if organizations fail to comply with this new law, they will be fined. A major factor in Iceland's decision probably had a lot to do with the composition of its legislative body, according to the publication — nearly half of the country's parliament is comprised of women. This isn't all that surprising, considering Iceland has the most gender equality of any country in the world, according to the 2017 Global Gender Gap Report. Additionally, Iceland was ranked number one in the world in political empowerment. (Take that, patriarchy!) I think this GIF perfectly sums up my thoughts on the news.

Unfortunately for us, the United States is nowhere close to this type of equality. The U.S. ranks 49th overall for gender equality, according to the report. (This is ahead of Kazakhstan but behind Uganda, for reference.) And we were ranked a pathetic 96th in political empowerment of women — just behind Algeria, Nepal, and Pakistan. It probably doesn't help that women comprise only 19 percent of Congress in the U.S., according to ThinkProgress. Seriously, it's time to step up our game. And Twitter seems to agree.

"Hooray for Iceland. Dedicated to eradicating the gender pay gap. Almost half legislators are female. Would [sic] that we could follow suit," one person tweeted this morning.

"Iceland leads the way becoming the first country to legalize equal pay. Hope this is the first of many," another person wrote on Twitter.

And another Twitter user pointed out, "It's now illegal to pay men more than women in Iceland. Meanwhile in U.S., Trump has rolled back equal pay initiatives."

Vermont Sen. Bernie Sanders took to Facebook to sing his praises for Iceland's new law. "We must follow the example of our brothers and sisters in Iceland and demand equal pay for equal work now, regardless of gender, ethnicity, sexuality or nationality," Sanders wrote. "As we fight back Republican efforts to revert women's rights to second-class, it is important to not lose sight that our real goal is to move forward and expand women's rights."

Still, many were skeptical of Iceland's groundbreaking legislation. "It won't work. Employers will simply change the name of the position slightly to reflect the difference," one Twitter user pointed out. "Equal pay, regardless of performance? REALLY BAD IDEA," another person tweeted.

And leave it to a few dudes to (inaccurately) mansplain the Equal Pay Act of 1963. Never mind that, you know, there's not much in place to hold businesses accountable for it.

Except, it isn't illegal. In fact, for every dollar earned by a man working full-time, year-round, a woman earns just 76 cents, according to the Institute for Women's Policy Research, CNBC reported.

At a previous job, I experienced the gender pay gap firsthand. I had been working for the company for four years when a guy 20 years older than me was hired. He had no degree and little experience in the field. I found out that he started out making more than what I had been earning at the time. So a female college graduate with experience — who was technically managing and training this new hire — was making less than a man with no degree and no experience. Shortly after he was hired, I got a "raise," so that we were making the same rate per hour. But I should have been making more from the get-go. Not less. Not the same. More.

So yeah, the gender gap is alive and well in the U.S. Let's hope more countries — including ours — will take note of what's happening in Iceland and follow suit. And sooner rather than later.