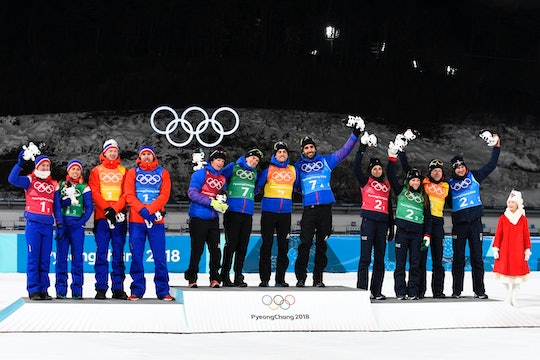 I'd Rather My Kid Strive For Mediocrity Instead Of Olympic Gold

Have you ever noticed that when an Olympic athlete wins gold, the camera immediately pans to mom? She's there weeping with joy and ready to envelop her precious child in a hug. The athlete always thanks their parents, "without whom this would never have been possible." I cannot imagine the immense pride parents feel when they see their child succeed on such a grand stage as the Olympics, but honestly, it's not something I hope to experience. I don't want my kid to be an Olympic athlete. Ever. In fact, I'd rather my child be mediocre.

Parents with podium dreams have to start their kids early if they're going to compete at an elite level. That means they're strapping skis on a wobbly toddler or enrolling them in fencing as soon as they can walk. At that age, the child can't really express if the activity is something they actually want to do. Now, I don't think that kids should be blindly handed over the reins to make all their choices, but when it comes to something as all-consuming as Olympic-level preparation, I do think they should have a say. It's one thing if the sport is the child's true passion, but when parents push something that hard because their identities are wrapped up in their child's accomplishments, I have a problem with that. And in light of that problem, I would rather have a child reach for mediocrity and feel whole, fulfilled, and less burdened by the weight of often unattainable expectations, instead of atop a podium with a gold medal around her neck.

Getting to the Olympics requires some major sacrifices on the part of both the athlete and their family. Despite what the commercials might have you believe, it takes a little more than a peanut butter sandwich and picking a child up when they fall to represent your country on the world stage every four years.

They miss out on rites of passage, from driver's ed to prom to graduation.

The path to becoming an Olympian is expensive. It's one of the things I like least about the Olympic Games, actually. Some sports are inherently exclusionary because the financial burden of specialized equipment, training, and travel is too great for most families to carry, let alone consistently and at a rate that will maximize their child's chances of competing successfully. If a family of modest means does go "all in," they could face financial ruin. Just ask gold medal gymnast Gabby Douglas's mom, who filed for Chapter 13 bankruptcy in 2012.

Young athletes in training often don't receive a traditional education, opting for tutors or homeschooling to get them more time in the gym or pool. They miss out on rites of passage, from driver's ed to prom to graduation. Many families uproot themselves to be closer to top coaches and facilities, and some young folks like 17-year-old snowboarder Hailey Langland live away from home and family to train. In an interview with NBC, she's confident that her sacrifice is worth it, but you can hear the remorse in her voice as she talks about missing out on seeing her little brother grow up.

Even if she was surrounded by people who would simply be proud of her for competing — and she would be — how would I be able to shield her from the internal pressure she would undoubtably feel?

The pressure on Olympic athletes to perform in the moment under an international spotlight is intense, to put it mildly. For every Red Gerard and Chloe Kim who rise to the challenge, there's a Nathan Chen who crumbles under the pressure. Chen, the gold medal favorite in men's figure skating, faltered in both the team competition and the men's short program. Although he redeemed himself in the free skate, landing a historic six quad jumps, he ended up in fifth place. It's not all about the medals, to be sure, and he certainly had his own Olympic rewards, but my mama heart hurt for him and so many others, of whom so much is expected.

If mediocrity means my daughter is safe, and her body is spared the brutality that often comes with competing at a high level, I am fine with that. In fact, I'm more than fine with that.

How would my daughter react to such "disappointment"? Even if she was surrounded by people who would simply be proud of her for competing — and she would be — how would I be able to shield her from the internal pressure she would undoubtably feel? The answer, of course, is that I couldn't. And that thought is devastating.

There's also the danger factor of Olympic-level competition and training. Olympic athletes push their bodies to the very limit of what is possible for human beings, and one wrong step can be the end of a career or worse. According to CNN, common Olympic injuries occur from overuse, including tendinitis and shin splints. If the PyeongChang Olympics are any indication, though, injuries can be much more severe. In a horrific crash in the first few days of the 2018 Winter Games, Austrian snowboarder Markus Schairer broke his neck. After a crash in the 1500m semi-final, British speedskater Elise Christie had to be carried from the ice in a stretcher.

That the culture of gymnastics created an environment in which a man could abuse girls in his care with impunity horrifies me.

I want my child to dream big, and to be the best she can be at whatever she decides to pursue. But not at the cost of her physical health, in either the short or the long term. If mediocrity means my daughter is safe, and her body is spared the brutality that often comes with competing at a high level, I am fine with that. In fact, I'm more than fine with that.

When you're the parent of an Olympic hopeful, you often have to entrust your child to other adults. If I've learned anything from the #MeToo movement, it's that far too many coaches have abused their power. Perhaps the most infamous example is that of USA Gymnastics and Michigan State University doctor Larry Nassar. After decades of sexual abuse, and following the testimony of over 150 women, Nassar was sentenced to 40 to 175 years in prison.

If we can strike a balance between pursuing her lofty goals, keeping her humble, and maintaining some semblance of family life, well, I guess we'll go for it.

That the culture of gymnastics created an environment in which a man could abuse girls in his care with impunity horrifies me. As a mom choosing activities in which to enroll her 2-year-old daughter, it gives me more than a little pause.

All this is not to say that, should my daughter develop Olympic-size dreams, I wouldn't support her in chasing them. But I'm the mom, and I have to consider what's in her best interest as well as that of her family. If we can strike a balance between pursuing her lofty goals, keeping her humble, and maintaining some semblance of family life, well, I guess we'll go for it. And in most instances, I believe that balance is found in what most would describe as "mediocrity." That word is often said with disdain, as if it's somehow horrible to be comfortable or secure or content. But I believe there's a level of self-love and an overabundance of self-worth found in someone who doesn't need to be the "best" at something. So rather than be the best, I hope my daughter is just happy, healthy, and safe.

And if she decides skeleton is her sport, I'm out.