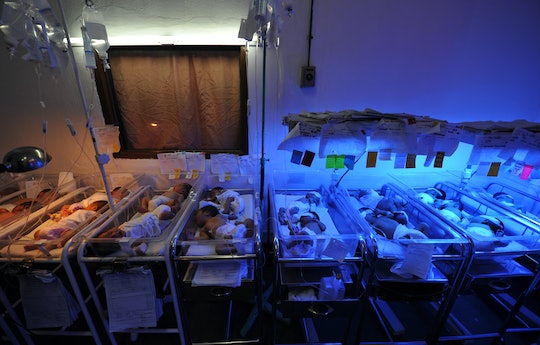 Identical Twins Give Birth At The Same Time On The Same Day, & It's Totally Strange

Everyone has heard the stories of twins sharing a "special connection," but this is the first time that I've heard of twin uteri operating on the same wavelength. Today reported the story of Sarah Mariuz and Leah Rodgers, identical twins who gave birth at the same time, more than 1,000 miles apart. The sisters didn't plan to get pregnant with their first babies at the same time, but they say that everyone asks them if they did.

The two both planned to tell each other their happy news in person last Thanksgiving, and Rodgers told Today that as soon as she saw Mariuz, she knew her twin was also pregnant: "She showed up to my front door and I welcomed her and Nick [Mariuz's husband] inside. And I had this crazy twin intuition — I call it my 'twintuition' — and I knew she was pregnant, too." Her sister said that once she learned that their due dates were only four days apart, "I ran down the hallway and got the ultrasound pic out of my purse and slapped it down next to Leah's. We were jumping up and down, just so happy for each other. Everyone was just in shock."

Both sisters ended up delivering their babies on June 30 at 1:18 a.m. in their respective time zones in Colorado and California, so the cousins were technically born an hour apart, but that's still closer than some actual twins. Perhaps it's not all that surprising that the two women's biological clocks were synced up; twins are often reported to live parallel lives, choosing the same schools or occupations as one another. Family planning, it seems, is just another logical extension of that. The Daily Mail has the story of another set of twins, Heather Richardson and Sarah Fidler, who found out they were pregnant on the same day, and although they were also assigned different due dates, they ended up giving birth 13 hours apart.

Reid Joseph Rodgers and Samantha Lynne Mariuz, meanwhile, are doing well, and are now home from their respective hospitals. According to Stanford's Tech Museum of Innovation, babies born to identical twins, like Reid and Samantha, are genetically more like half-siblings than cousins, sharing 25 percent of their DNA instead of the usual 12.5 percent that most cousins have in common. The babies have yet to meet, since they're separated by such a distance, but Mariuz told Today that they'll definitely get together for Christmas.