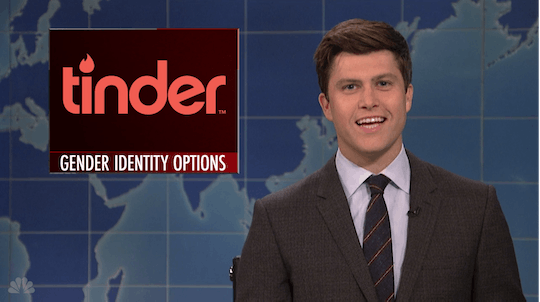 Saturday Night Live and NBC have come under fire post-election for their roles in "normalizing" Donald Trump by giving him a comedy platform. But, on the whole, SNL has been doing great work for its last two seasons, pushing the boundaries of safe, mainstream comedy to make gutsy political statements that poke fun at people in power — namely, white men. Men's rights activists have been skewered on the show, "Black Jeopardy" helps white people check how clueless we are sometimes, and, of course, the female cast members of SNL have been dragging the ridiculous standards to which women are held with fearlessness and nuance (and Beyoncé). That's why it was so disappointing when, over the weekend, SNL struck an atypically sour note.

On the Nov. 19 installment of "Weekend Update," Colin Jost addressed the fact that Tinder had (finally) announced an update that would allow users to choose from 37 possible gender identity options. Not only does this feature help users identify themselves more accurately, but it also helps those who are swiping filter for the specific variety of genders to whom they are attracted. It's a vital safety feature for trans, gender nonconforming, and non-binary users seeking to avoid danger at the hands of those who would claim "trans panic" defenses when they learn their dates do not fall within the male/female binary to which the app had previously restricted them. Bizarrely, Jost used the Tinder update to blame trans folks for why Democrats lost the election.

The backlash was swift and resounding. To blame a hurting, marginalized community with a history of collective trauma and erasure from the national discourse, staggering murder rates, and housing, employment, and legislative discriminations at every turn — a community that started the LGBTQ+ rights movement only to be left behind 50 years later — for putting a demagogue in office is absurd. To do it on the eve on Trans Day of Remembrance — a day that exists because trans people get murdered so much — is cruel. And it's uncharacteristic for heretofore woke bae Colin Jost.

In what could been a heartening recovery, Jost actually seemed to be listening to and engaging with the Twitter criticism from LBGTQ+ people, namely in the following exchange with queer punk band PWR BTTM. Unfortunately, he only doubled down on his position, defending the joke and pointing to a New York Times op-ed from over the weekend, which blamed identity politics for the election results, as his inspiration. (Saturday Night Live declined to comment when Romper reached out regarding this matter.)

The op-ed argues that a focus on "celebrating differences," unpacking and acknowledging the oppression of various marginalized groups in America, splintered the democratic party instead of bringing it together by focusing on issues that affect the most people. Hillary Clinton's focus on doling shoutouts to women, Black Lives Matter, and the LGBTQ+ community, according to the op-ed's author Mark Lilla, left straight, white, and/or male Americans feeling ignored and attacked, ultimately turning them off to the party.

But that very argument misses the point of inclusivity. Focusing primarily on issues that affect the most people is how marginalized people got so marginalized in the first place. Re-centering the public discourse around them and their narratives is how we combat their marginalization and make sure their existence is validated. By necessity, this means that the issues of the privileged have to take a seat while we play catch-up. No one is questioning the personhood or humanity of straight, cisgender, white men.

If straight, cisgender, white people are feeling forgotten about in this effort, that's because everything has been about them for centuries and, right now, they're not while we reach back to help others. If white people are feeling attacked, that's because you're supposed to feel bad when taking accountability. That's what taking accountability means — acknowledging your complicity in something that hurt someone and fully experiencing the discomfort you feel in response. Those uncomfortable feelings are supposed to motivate you not to commit the same transgressions in the future.

To blame transgender folks for democrats losing the election is especially a slap in the face, considering they've been at the forefront of the progressive movement since its inception. Trans people have been some of history's greatest labor union organizers, black civil rights activists, and trailblazers of feminism, to say nothing of what they do for queer civil rights. And they have often been doing the work for decades before it enters the national consciousness and gets a shoutout on the campaign trail during a presidential election.

Plenty of SNL sketches that mean well have been critiqued for their blind spots. SNL itself needed a special black women's casting search over outrage that it had been so long since they'd employed a black comedienne. But this specific Tinder joke bombed so badly because it made an obvious mistake, which SNL had been working so hard to avoid in recent seasons — it punched down.

Making marginalized people the butt of a joke from a position of relative power (be it whiteness, maleness, or in Jost's case, white cisgender maleness) has long-since been dismissed in most high-level comedy spaces as not okay. There are plenty of ways to satirize dark current events that have marginalized people at the center of them without punching down — namely, making the privileged people around them the butt of the joke — which SNL has been doing successfully for two years. They are, and have been, so much better than this joke.