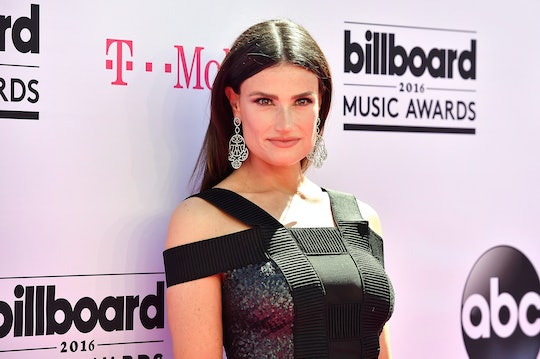 Although celebrity parents may seem perfect all the time, they're the first to admit that they have their flaws. Like Idina Menzel, for example — she's a Broadway actress, the powerhouse voice behind Elsa in Frozen, and a mom to her young son — and isn't afraid to admit that she isn't a perfect mom. Take what happened earlier this week. It was revealed that Idina Menzel's son was disappointed when the tooth fairy didn't show, and her tweets can resonate with so many moms as well who feel like perfection is overrated.

Menzel is the mom to a 9-year-old son named Walker, who she shares with her ex-husband, actor Taye Diggs, according to Us Weekly. With her son well into elementary school, people would have have expected her to have this whole parenting thing down. But there are still a few things that she messes up on, and her honesty is so appreciated — especially since it can resonate with so many more moms out there.

On Tuesday, Menzel tweeted about her recent epic fail as a mom — she forgot that the tooth fairy had to visit Walker the other night. "The tooth fairy didn't show up last night," Menzel wrote in tweet.

While she and her son prepped for the tooth fairy's visit, she kind of forgot what she was supposed to do later that night.

"Mom put tooth in tissue and son hid it under pillow," Menzel wrote. "Then mom fell asleep and woke up this morning to son with tears."

Her takeaway from this?

"That tooth fairy better get her s— together."

Although Menzel might have used the hashtag, badmoms to drive in her point about how much she disappointed her son, Twitter users came to her rescue to make her feel a little less alone. They were also able to provide some tips for rectifying this with her son.

And their ideas are pretty genius.

Most parents agreed on one solution — throw the money underneath the bed the next day and trick her son into thinking that he missed it. Based on these replies, its clear for everyone (including Menzel) to see that this is incredibly common — sometimes, the tooth fairy forgets to visit homes and leave treats, and that is OK.

The internet is full of creative ideas and excuses to use when the tooth fairy skips your home during her routine neighborhood visit. Whether it's leaving a note (and a little extra money) to apologize, throwing the money underneath the bed, or simply telling children that the tooth fairy "got lost on her way" — kids will have to understand that the tooth fairy can't be everywhere all the time.

At the end of the day, kids will be so happy that they've gotten a little bit of money, that they'll probably forget all about the tooth fairy missing a routine visit.

And this doesn't make Menzel a bad mom by any means. When she talks about her son in interviews, you can tell that she prides herself on being a good mom for Walker. In a 2016 interview with Telegraph, Menzel said she needed to be a good role model for him. Menzel said:

I want to do the right thing by my son, and that means balancing my work and my quality time with him. I know he needs to grow up seeing a really happy, confident mother, then he'll be drawn to those kinds of women.

So what if the tooth fairy misses a day and makes Menzel a "bad mom"? Practically everyone has been there before.