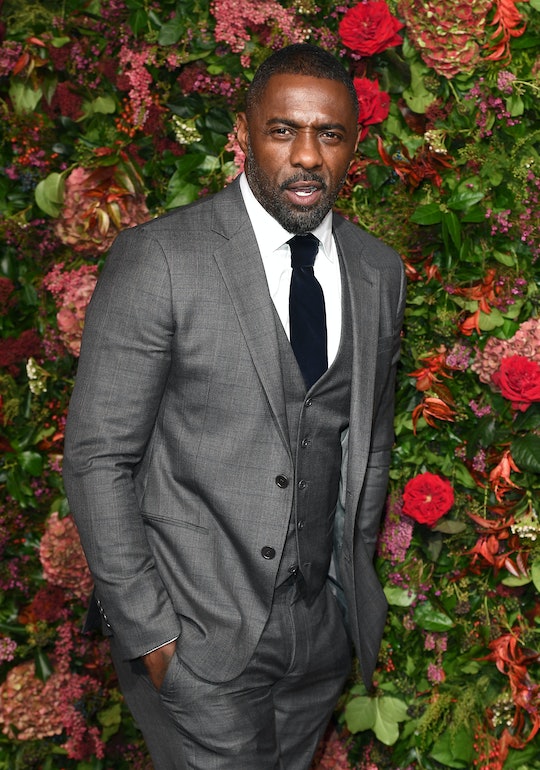 Prince Harry and Meghan Markle got married a little more than a year ago on May 19, 2018, and honestly, the afterparty was so great people are still talking about it to this day. Actor, Idris Elba, was among the guests invited to attend the wedding ceremony and private reception later in the evening, but as it turns out, he was also put to work during the wedding, too. In a new interview, Idris Elba revealed that he was Prince Harry and Meghan Markle's royal wedding DJ — and it's hard to believe that he went 10 whole months without telling such an incredible story.

During an appearance on The Ellen Show on Wednesday, Elba casually mentioned to host, Ellen Degeneres, that he just so happened to DJ at the hottest wedding of 2018 — Prince Harry and Meghan Markle's wedding. But, Prince Harry didn't book Elba through the phonebook or by searching "very famous and attractive actors who can DJ weddings" on Google. Instead, he went to the actor to ask him to DJ their wedding as a favor.

Elba explained to DeGeneres how their friendship came to be, according to Page Six:

So Harry and I, we've hung out a few times, through his dad. His dad's charity, the Prince's Trust, helped me out as a young actor. So I do a lot of work with them, Harry and William...And Harry came to a couple of parties I had deejayed.

So, when Prince Harry needed a DJ for his wedding, he knew who to call — DJ Big Driis, which is Elba's stage name for his musical performances, according to INSIDER.

And Prince Harry actually asked the star himself to spin a few tunes at his wedding. Elba detailed their conversation to DeGeneres, according to Page Six:

And Elba agreed to do just that. He was spotted attending the publicly televised royal wedding reception with his fiancée, Sabrina Dhowre, according to Ebony. And clearly Elba was invited to both of the wedding receptions after the ceremony — the lunch time reception hosted by Prince Harry's grandmother, Queen Elizabeth II, and the evening reception hosted by Prince Harry's dad, Prince Charles — both of which were (unfortunately) not televised. If only they were, because a lot of people would have paid good money to see Elba DJ one of the biggest weddings of the century.

But royal watchers are already aware that this story isn't entirely new. Just hours after the royal wedding was over, reports emerged that Elba was in control of choosing the music at the evening reception (the same reception where Serena William reportedly "played beer pong like tennis" according to Yahoo!). During this reception, Elba played songs from a "playlist of soul classics, 1960's R&B, and 1980's dance hits," according to The Sun, and had all of the guests out of their seats, dancing.

But there is no telling if Elba had any influence in Markle and Prince Harry choosing Whitney Houston's 1987 hit, "I Wanna Dance With Somebody" as the song for their first dance, according to People.

This isn't the first time that Elba has talked about playing at the royal wedding, either. In an August 2018 profile in The Guardian, Elba opened up (a little) about the experience, saying that he didn't want to reveal too much since it was "a private day." Elba, however, did call the wedding "one of the highlights" of his life and said "it was a beautiful experience." Awww.

And you don't have to be a member of the royal family to see Elba DJ in person (thank goodness). In April, Elba will be playing at Coachella Valley Arts and Music Festival in Indio, California, according to CNN, where he will make festival attendees dance. And who knows? Maybe he will dig in to his royal wedding playlist for songs to play during his set.

Elba's resume is already super impressive, and adding "the royal wedding" on to his list of played gigs has likely made it a lot better.