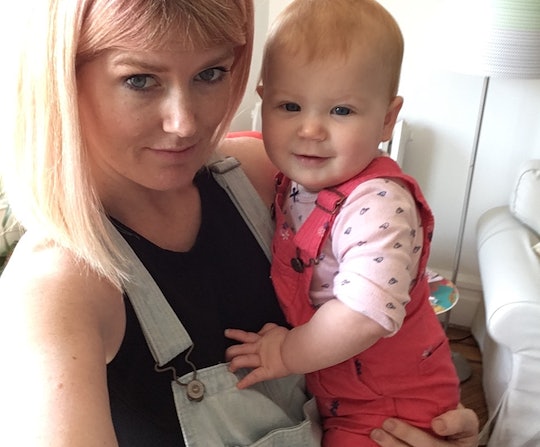 Sure, overalls enthusiast Kendall Jenner thinks she can pull them off, but she doesn't deserve them. No, overalls are utility items designed for women whose clothing needs include: a) easy boob access, b) a free-form enough garment to cover a constantly-changing belly, c) multiple pockets for spare pacifiers, d) ambiguity around the true size of your butt, and e) a general '90s party vibe that makes you think that suspending a pair of baggy jeans from your shoulders is a funky aesthetic choice, and not something you do because everything else in your wardrobe looks like clubwear when you try it on.

In short, overalls are ~in~ right now, but for new moms, overalls have been, and always will be, in. Like the spirit of Rachel Green, the new mom in overalls is someone you want to cuddle, someone who looks ready to get down and dirty, but also might have on a full face of makeup (#findingmyidentitypostbaby).

I stumbled upon overalls after the birth of my daughter because they were beginning to make inroads among the fashionably low-femme in New York, and because there was pretty much nothing I could wear and breastfeed in that didn't result in gargantuan windows of visible flesh as I reached in to fetch my boob. (You haven't publicly nursed until you have publicly nursed in front of your father-in-law.)

I had lived for the first month or so in a threadbare maxi that told the world about my struggles as a new mom, and overalls felt like a weirdly fashionable alternative approach to postpartum dressing, thanks to the 20-year-olds who were heading off to their jobs at startups at the time dressed for a day on the farm. I was promised by younger coworkers that overalls were for everyone. That they were, in fact, a powerful refutation of the patriarchy for some reason or another (related to sex appeal? To double-stitched seams? IDK).

Having soaked in the vibes of an ascendent agricultural catwalk trend, the picture in my head before I got my hands on a pair was decidedly:

I couldn't wait to strap my Ergo over the top, add a Che Guevara beret, then take my baby out to an urban farm to harvest some radishes.

Of course on me, the reality was something more like:

I never got further than the Jamaican food truck by the park.

I purchased my pair from ETSY, of all places (emphasis mine), a second-hand pair of Hollister duds. Truly nothing says redux like overalls not from Levi but from Hollister, that wannabe surfshop that only exists in malls hundreds of miles from the sea and that played Phantom Planet for two straight years starting in 2002. Could anything feel more comfortable and be any better at reminding you of your pre-baby self than those mahogany-stained store shutters?

The added bonus in overallsing my mom bod was that I could match my baby, who I dressed exclusively in Osh Kosh B'Gosh from birth until she started potty training.

The thing about postpartum is that while being big and bulgy while pregnant is considered an adorable feat you might compliment a stranger on, having a body stuck between worlds on the far side of childbirth is the kind of problem the What Not To Wear style team would abandon you in the hexagonal mirrors over. It's a fashion ~challenge~ involving different-sized tops and bottoms, maternity clothing that looks deflated, and regular clothing that still doesn't fit.

Donning a pair of overalls made me feel like an aspirational welder in some sort of rom-com about a manic pixie dream girl who also has a baby. It made me want to repair a fusebox or learn how to horse-whisper. It made me feel half-cute.

The new mom transition, which has been brilliantly coined "matrescence" (i.e., the adolescence of motherhood) by anthropologists, is a time when figuring out what to wear is the external riddle to a deep-seated spiritual change taking place. For my part, overalls gave me several pockets to put my hands in while I pondered the immense life-changes that had beset me. Overalls promised to abide by whatever sports bra had agreed to pass as a top that day, and to convince me that I may not have been doing much more than feeding my baby round the clock, but that give me a spanner, and I was ready for anything.

More Like This
I’m A Mom Who Will Never Own A Home
Home Reno Culture Makes Me Feel Like I Live In A "Before" House
When Is Thanksgiving? All About Turkey Day 2022
Here’s How To Keep Your Baby Safe When Their Older Sibling Is Sick