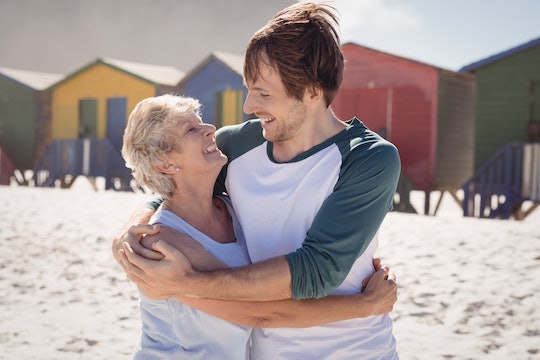 If A Guy Does These 7 Things, He’s A Momma’s Boy

You might have dated partners who are close to their families before. They're in attendance at every family event, large or small, they make sure to at least drop in at weekly family dinners, and they genuinely enjoy talking to and making regular plans with their siblings or parents. In certain cases, they might even toe the line between just being close with their family and being something closer to dependent on members of their family. If a guy does these things, he's a momma's boy, which, if you're in a relationship with him, you might want to know because it probably will affect the relationship that you have with him — and her — as well.

"I tell partners to address it as early as possible to avoid investing too much into a relationship that isn’t going to work," Dr. Dion Metzger, MD, a board-certified psychiatrist, tells Romper by email. "As a mother/son relationship can be a sensitive subject, I advise partners to approach the topic delicately. Instead of giving an ultimatum of 'her or me,' just communicate feeling less valued in the relationship and ask if it’s something that can be worked on. If he says no, wish him the best and part ways."

If it's something that he feels he can work on, there are a couple of ways to go about it. Either he can attempt to be more mindful of his relationship with his mother and your feelings about it or, potentially, meeting with a therapist might be helpful.

"Therapy can help people see this pattern in their relationship, and then learn ways to break this cycle and interact in a healthier way with each other," Heidi McBain, MA, LMFT, LPC, RPT, a licensed marriage and family therapist tells Romper in an email exchange.

If the man in your life exhibits signs that he might be a momma's boy, it's likely time for a serious conversation.