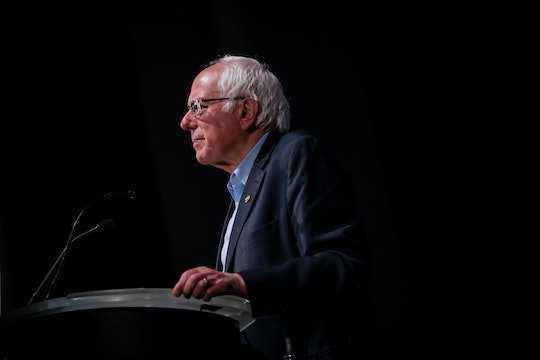 If Bernie Sanders Loses New York, Will He Lose The Nomination? Not Necessarily

The New York Democratic primary is fast-approaching, and with 247 delegates at stake, this contest is an important one. Although advance polls show former Secretary of State Hillary Clinton leading over Vermont Sen. Bernie Sanders, Sanders and his campaign are holding out hope for another upset. But how important is the Empire State? If Sanders loses New York, does he lose the nomination?

Not necessarily. A lot depends on how badly Sanders loses in New York on April 19. At this point, an outright win for him seems unlikely. Clinton currently holds a double digit lead in the state that previously elected her for two terms as a senator. Still, the story of the Sanders campaign is a story of surprises and upsets. (Never forget Michigan!) And as the senator himself said on Meet The Press, "Obviously a victory in New York State, Secretary Clinton's state that she represented in the Senate, would be an enormous boost for us."

But all is not lost for Sanders if he fails to grab that official victory. Remember, unlike in many Republican primaries, which go with a winner-takes-all system, Democratic delegates are rewarded proportionally, so Sanders stands to gain a bunch of delegates even if he doesn't actually win. In the same interview, Sanders remained hopeful about his overall chances in the event of a New York loss, saying he thought he could "absolutely" win the nomination anyway. "I think we're going to head out west, I think we're looking strong in Pennsylvania. We do think... we've got a path to victory."

Besides California, which has whopping 546 delegates, New York is the most delegate-rich of the remaining states. Currently, Clinton leads Sanders by a little over 200 delegates, although Sanders has been on a winning streak lately, coming out on top in eight of the past nine contests. This isn't counting superdelegates who, although they're mostly standing behind Clinton for now, could very well switch to Sanders if he wins the majority of other primary voters.

Clinton's 200ish delegate lead isn't insurmountable even if she wins New York, but Sanders would have to do very, very well in the remaining contests. That might be tough, given that upcoming states like Maryland and New Jersey have closed primaries. That means they're for registered Democrats only, excluding the Independents who tend to vote in droves for Sanders. By the way, New York also has a closed primary, lending credence to those predicting an all-out Clinton win there on Tuesday.

Still, who knows? Sanders is stumping in New York nonstop now, and he's certainly bringing out the enthusiastic crowds, with a recent rally in the Bronx drawing 18,000 people. And hey, even if he doesn't win the state, he's already racked up one enviable New York victory — he scored tickets to Hamilton.