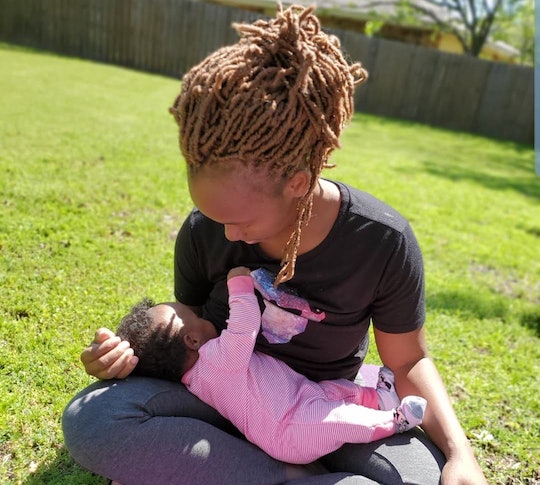 Yes, We Need A "Special" Breastfeeding Week For Black Moms

You wouldn't think that celebrating Black Breastfeeding Week — which comes at the tail end of International Breastfeeding Month each year — is controversial. I didn't think so. But as it turned out, I was wrong.

Within 12 hours, my usual five shares were over a hundred and counting. Despite the majority of the comments being supportive, there were a considerable number who asked why Black women needed a week to themselves. Why, they asked, couldn’t we be satisfied with being included in the usual celebrations?

A few of the comments hurt.

“If there was a white breastfeeding week we'd be racist. Why do people who clearly see themselves as different need special things to make themselves feel equal?" asked one commenter, who went on to say that "we are all equal we don't need special events" and that "anyone who disagrees with me is a racist plain and simple as you clearly don't see yourself as an equal!!”

There were a few that were particularly interesting, like the soul who said Black Breastfeeding Week, like Black History Month, and the Black Power movement, was both racist and unfair. But if I'm more generous, most of the comments were people seemingly innocently asking why Black women needed Black Breastfeeding Month at all. (The founders of Black Breastfeeding Week have a post explaining why Black women have a specific reason to have our needs addressed in a separate week. If you’re interested, you’ll read it. If you’re not and are simply on this "acknowledging racial differences is divisive" nonsense, you’re just a troll.)

I’ve experienced several variations on the “why do Black people need special favors” theme throughout my life. It’s a continuation of what’s always happened in America. When Black people were finally freed from slavery, making sure we were given a place to stay and an education — despite centuries of oppression — was considered a special favor.

There’s nothing “special” about making effort to address your cultural needs when it’s clear that the United States is based on a white standard and has no interest in helping you overcome the health and economic disparities that were caused, and continue to multiply, by a mix of personal and systemic racism.

There’s no “favor” in knowing you need to keep nursing despite obstacles because it decreases your cancer risk when you’ve had five relatives diagnosed with cancer in the last four years. It’s not a treat to know that Black babies are dying several times the national average, per the CDC. Additionally, despite breastfeeding being one of the only tools available to reduce these risks, your community has the lowest initiations rates, as well as the shortest average length of time breastfeeding.

I’ve experienced several variations on the 'why do Black people need special favors' theme throughout my life.

Imagine having all of those issues and feeling uncomfortable around white people because they regularly choose to act — like the folks on my post — to downplay your experiences. But all of the medical professionals, lactation consultants, and breastfeeding moms are white.

You’re lost, lonely, and without support you can trust. No one in your family can share stories of having breastfed, and many of them make faces of disgust at the mere suggestion.

How can you expect that mom to persist with nursing when you take that information, pair it with the “typical” breastfeeding obstacles and economic uncertainty?

Black women deserve to feel safe: let’s not pretend like the people of the United States haven’t given us a million reasons not to trust movements spearheaded by white leadership.

Black women have been metaphorically and literally raped for American benefit for hundreds of years. Why do we expect now to be any different?

If you don’t get that, you’re a part of the problem.

Our society has a problem with centering Blackness, despite the long list of offenses that I’ve experienced. And until anti-Black sentiment changes, Black people celebrating anything will continue to be a problem.

I suffer from some pretty serious anxiety, so I’m thankful I had a support system holding things down while I hid from the attention. But I was more disgusted than anxious. I even broke my no-comment rule to call the ‘Black stuff is racist’ lady stupid — I wasn’t proud of that one.

Now that I’ve told you what Black Breastfeeding Week is, here’s a little bit about what it isn’t:

Whether others understand it or not, Black Breastfeeding Week is about Black women breastfeeding. If you don’t understand why it’s necessary, look at the hateful comments on my writer’s page.

But above all else, if you don’t understand or don’t like it, that’s OK. Because it probably means that the celebration isn’t for you. Here's what Black Breastfeeding Week is about:

The next time you see a racist comment, remember these people are often doctors, lactation consultants, police officers, and daycare providers. Their perspectives have direct consequences for our livelihood. This is why we need a safe space.

To the Black women who came to my defense or were too fearful to jump in but knew the struggle I was describing, I see you. I’m fighting so you can feel heard in a world that intends to silence you and seen in a land that wants you invisible.

I’m not shutting up. I’m not backing down.

And to those who love it as well as those who hate it, happy Black Breastfeeding Week.