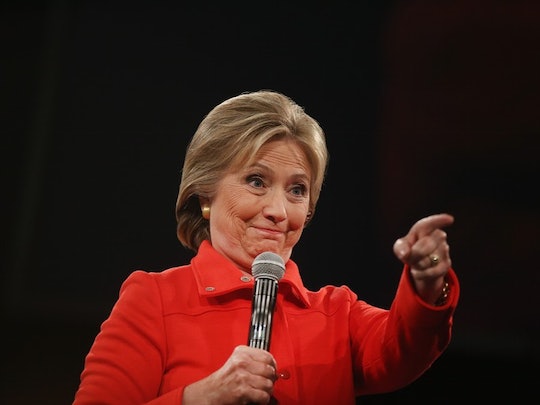 If Hillary Clinton Wins The Presidency, What Will The U.S. Look Like?

With one year left before the general election for the next president of the United States, the people in the current field of candidates are still fine-tuning their positions on a number of policies. But, as one of the few commander-in-chief hopefuls with an actual voting record, we have a pretty clear vision of what the U.S. would look like if Hillary Clinton becomes president. Although her positions on a number of issues have evolved since the country got to know Clinton as the First Lady in the early 1990s, she is now running on a solidly liberal platform, and remains the frontrunner in the competition for the Democratic nomination.

Compared to GOP frontrunners Donald Trump and Ben Carson, who have never been elected to public office, Clinton definition has a leg up in the practical sense of knowing how politics work from the inside. Her national voting record stretches all the way back to when she became Senator Clinton of New York in 2001; but let’s not forget all of the experience she gained during her years as a lawyer, First Lady of Arkansas, and of course, while she was FLOTUS-ing from 1992 to 2000.

Over the last 14 years, Hillary’s positions on many policies have certainly changed — something her critics have been quick to note. But during the first Democratic primary debate on October 13, 2015, she defended herself pretty successfully on that front: Clinton admitted that her policies have changed as she’s absorbed new information. You know, “like most human beings — including those of us who run for office,” she said during the debate. And judging by how well Clinton’s doing in the presidential race so far, it doesn’t look like to many of her supporters are concerned by where she stands now, which is pretty much all that matters.

So what would a country led by Hillary Clinton as president actually look like? Here’s where Clinton stands today and what that could mean for the future of the United States, if her planned policies come to pass:

College Would Be Much More Affordable

With the average college student graduating with debt exceeding $35,000 — triple the average from just 20 years ago — Clinton announced in August that she plans to propose the “New College Compact” as president. Under that plan, students could attend four-year public programs without taking out loans for tuition and community colleges would be tuition-free. Graduates who are already paying off loans would be able to refinance at lower rates. When announcing the plan, Clinton said, “We need to make a quality education affordable and available to everyone willing to work for it without saddling them with decades of debt.” Clinton proposed paying for the program, estimated to cost $350 billion throughout 10 years, in part by putting an itemized tax deduction cap at 28 percent for the wealthiest people in the country.

Immigrants Could Gain Citizenship — If They Work For It

In Clinton’s America, there would be no wall between the United States and Mexico. Instead, Clinton would encourage Congress to pass comprehensive immigration reform that would allow people to earn citizenship if they abide by the law and pay taxes. According to Clinton’s campaign website:

Immigration enforcement must be more humane, more targeted, and more effective. We will focus our limited resources on those individuals who pose a violent threat to public safety. Hillary will also end private immigrant detention centers.

Clinton’s immigration plan is admittedly similar to that of President Obama. He has been unable to get an immigration reform plan through Congress, but came close in 2013 when it passed in the Senate.

Minimum Wage Would Be Higher, Taxes Lower For Most

The question of where Clinton (or any candidate) stands on the economy is a broad one. The key points of Clinton’s economic reform plans involve taxing wealthy Americans “their fair share,” giving tax breaks to lower-income residents, and raising the minimum wage. “We can’t create enough jobs and new businesses without more growth, and we can’t build strong families and support our consumer economy without more fairness. We need both,” Clinton said of her plans for the economy in June.

There Would Be “Sensible” Gun Reform

With the growing number of deaths caused by gun violence in the U.S., Clinton has called for “sensible” reform to gun laws multiple times — which is still farther left than Democratic opponent Bernie Sanders’ gun policies reach. The cornerstone of her plan is making background checks for those attempting to buy guns more comprehensive and widespread. She also advocates for reinstating the assault weapons ban, which was passed when husband Bill Clinton was president in 1994, but expired in 2004. A similar assault weapons bill failed to pass the Senate in 2013.

Clinton’s stance on women’s issues and the economy overlap because, as she said in September, “What’s good for women is good for America.” For Clinton, that means closing the pay gap between men and women, offering paid family leave, and offering affordable childcare. Beyond that, Clinton advocates for keeping the government out of women’s health issues, specifically when it comes to cancer screens, contraception, and abortions. “When it comes to women's health, there are two kinds of experts: women and their doctors,” she tweeted in May.

We’re only partway through the marathon race for president, but it’s reassuring to know the top Democratic candidate advocates for some majorly positive things: Namely, making college more affordable, giving men and women equal wages, and preventing guns from getting into the wrong hands. If you ask me, that’s a county where I’d want to live — and, as Clinton promises, that’s only the beginning.