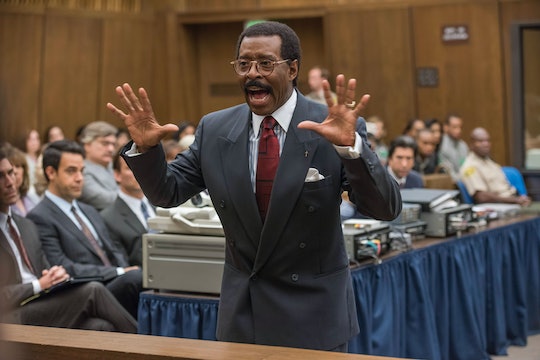 "If It Doesn't Fit, You Must Acquit" Video Proves Just How Powerful The Motto Was

"If it doesn't fit, you must acquit," became the line of the O.J. Simpson trial — especially for the defense team. Whether you knew a lot about the case or not, chances are you've heard some parody of the famous phrase said by defense attorney Johnnie Cochran. The phrase was such a powerful moment for the defense, that it is still used in pop culture today (Seinfeld used it in "The Caddy" episode). And after watching video of the "if it doesn't fit, you must acquit" moment, you'll realize just how powerful those seven words were for O.J. Simpson's team.

The first time the phrase was uttered in the courtroom came during Johnnie Cochran's closing argument. It had a lot of meaning, but as you'll see in the video, it was Cochran's way of poking holes in the prosecution's evidence. A lot of things "didn't fit," Cochran explained to the men and women of the jury. The glove Simpson tried on in front of the jury didn't fit, the knit cap theory the prosecution presented didn't fit, a lot of the evidence didn't fit. So, as Cochran says, "if it doesn't fit, you must acquit." And that's exactly what the jury did.

It's a bit of a gimmick, but what Cochran is saying is true. During the trial, the prosecution was trying to prove O.J. Simpson was guilty beyond reasonable doubt. If there was any doubt that Simpson didn't murder Nicole Brown Simpson and Ron Goldman, then the jury had to acquit him of all charges.

It was certainly an interesting technique Cochran chose for closing arguments. Using this type of rhetoric is much more memorable — and clearly more effective — than taking the approach the prosecution chose.