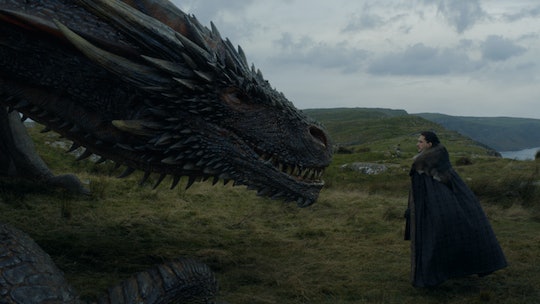 Last year, when Game of Thrones confirmed what everyone had been predicting for years and years — that Jon Snow was, in fact, the child of Lyanna Stark and Rhaegar Targaryen — the fandom went wild. It then went about coming up with a thousand theories ranging from "probably true" to "completely bonkers" about what would happen next. But something that I personally never thought of was: what if Jon Snow's parents were married on Game of Thrones? It's not something I ever truly considered until last Sunday's episode, "Eastwatch," but if it were true, it would be a total game-changer for both Jon and Daenerys.

In a brief but surprising scene, Gilly unearthed a huge clue about Rhaegar Targaryen. Reading aloud from a random Citadel book, she discovered that Rhaegar annulled his marriage to Elia Martell and married someone else whose name isn't mentioned but who every Game of Thrones fan can assume was probably Lyanna Stark. Gilly has no idea who any of these people are and, of course, Sam immediately dismissed the importance of what she said, as many male characters are known to do on this show. So the significance of this information was completely lost on them, at least for the time being, though it's bound to become extremely important later on.

It's not like Rhaegar and Lyanna having a kid out of wedlock wouldn't be significant. It would mean, at the very least, that Jon would probably be able to ride a dragon, which is nothing to sneeze at. But if these two were legally married before they had him, and if Jon was in fact not a bastard, that's something different entirely. Because, following the Targaryen line of succession, that would give him the strongest claim to the Iron Throne — even outranking Daenerys. It would certainly make the rocky alliance the two of them have formed a bit more tense.

And let's not even try to fathom how much that would suck for Dany. After all she's gone through to make it to Westeros, after all the sacrifices she's made and the assassination attempts she's evaded, having her thunder stolen at the eleventh hour by some guy would be less than ideal. Of course, Jon has never expressed any inclination to be king of anything, so he may just step aside and let her rule like the Nice Guy that he is. But still. What a way to undermine everything she's gotten for herself.

But this is still all solidly in the hypothetical category, as Bran is the only character who knows about Jon's true lineage and he doesn't seem to think it's important enough for Arya or Sansa to know. If a tree falls in the forest when no one's there to hear it, it might not make a sound. If a bastard turns out to actually be the true-born heir to the throne but no one knows about it, he's kind of still a bastard. With any luck, Sam and Gilly will head up to Winterfell, reconnect with Bran, and chat for long enough to realize that Jon is Rhaegar's son and that it lines up, time-wise, with Rhaegar's second marriage.

Part of being a Game of Thrones fan is having patience. If you're able to wait the excruciating 11-12 months between seasons, the payoff is huge; Season 7 has embodied this aspect of the show. After years of waiting for Jon and Dany to meet up, it's finally happened. The remaining Starks reunited, even though it wasn't quite as happy as many hoped it would be. And Gendry has at long last returned from the world's longest rowboat ride. So, as nice as it would have been for Jon to have learned the truth of his parentage from the outset of Season 7, it looks like patience will be necessary once again. All fans can do for now is watch and wait.