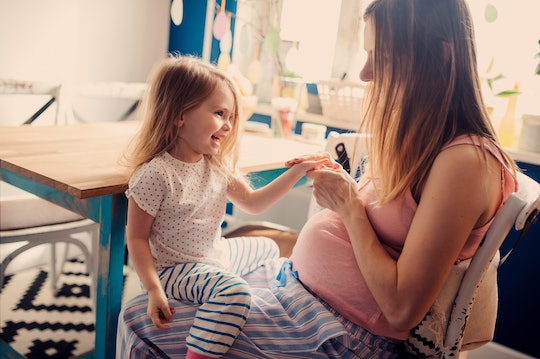 What Giving Birth Early Means For Your Next Pregnancy

Babies tend to operate on their own timelines, and everyone else has to respect that. A friend of mine once went into labor on her babymoon trip in Florida, and had to deliver her son in a hospital hundreds of miles from home. She and her child are healthy and happy now, but giving birth at seven months was not something she wanted to repeat. When the time came to try again, she had serious concerns about another early birth. Many women in her position also wonder, "if my first baby was early, will my second be, too?"

First, it's important to take a moment to define early. A full-term pregnancy lasts about 40 weeks, according to the New York State Department of Health. If a baby is delivered before 37 weeks, then it's known as a preterm birth, according to Baby Center. Babies who are delivered preterm have an increased risk for complications such as cerebral palsy, cognitive impairment, and behavioral problems, according to the Mayo Clinic. In general, it's best to let a baby develop to full term to avoid these health concerns. Unfortunately, the causes of preterm births are still not fully understood, and sometimes babies just show up early, despite everyone's efforts to make the kid wait.

There is, however, one thing to keep in mind. Early term births appear to run in the family. According to a 2016 study in Obstetrics & Gynecology, a previous preterm birth is associated with subsequent early deliveries as well. In fact, the study found that women who had a prior early term birth were more than twice as likely to have a preterm birth with later children. Additionally, the March of Dimes lists a previous preterm baby as a major risk factor for going into preterm labor again. It isn't a guarantee, but odds are high that your future children will also be early arrivals. So is there any way to prevent a second preterm delivery? The best course of action is to discuss your full medical history and delivery concerns with a doctor, so you can work together to lower the chances of another preterm birth.

More Like This
There's A Good Reason Why Your Baby Is So In Love With CoComelon
Why Does My Baby Cough While Breastfeeding? Experts Explain
30 Marvelous Baby Boy Names That Start With “M”
Gathre’s Winnie The Pooh Collection Is Finally Here