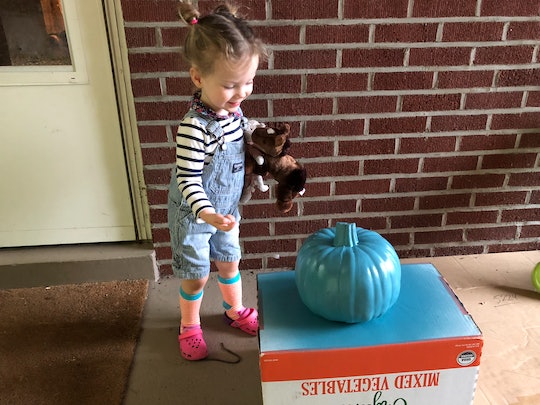 If Teal Pumpkins Make You Angry, I Don't Know How To Help You

It’s an early Saturday morning and I’m snuggled up with a cup of coffee while I catch up on the internet before my daughter Claire wakes up. I’m scrolling through Twitter when I see a headline next to a teal pumpkin: “Your kid’s problem isn’t mine!” It’s a blog post by New Jersey radio host Judi Franco. Throughout it she mouths off about the ridiculousness of The Teal Pumpkin Project, an effort initiated in 2014 by FARE (Food Allergy Research & Education) to encourage families to place a teal pumpkin on their porch to signal they have non-food treats available for kids whose allergies keep them from indulging in typical Halloween fare. Hold my butterbeer, I thought, this lady has a problem with teal pumpkins?

The night before, my husband, Claire and I had painted our own teal pumpkin, a gesture we decided would not only be a signal to kids that they could safely trick-or-treat at our house, but that they live in a neighborhood that supports them. Claire and I had plans to put teal gems on it after breakfast.

But to Franco, our actions are “indicative of a bigger problem.” She writes that it’s efforts like The Teal Pumpkin Project that push the world down a path where the majority has to shuffle, redesign and “go out of their way to be accommodating” to the minority.

The burden of our teal pumpkin felt like something we would survive as a family.

Painting our pumpkin took 10 minutes tops. We left it on the front porch to dry overnight and then went inside to unwrap pencils, stickers, rubber bracelets, skeleton pens and bubbles for our allergy-safe basket. It only took longer than five minutes because Claire "helped," plunking each item into the bag one at a time. That means in all of 20 minutes we were able to “accommodate” people who might otherwise not look forward to Halloween. We still had time for dinner, bath and reading a bedtime story.

The burden of our teal pumpkin felt like something we would survive as a family.

"I wanted to sympathize," Judi Franco wrote, "I really did."

I'll stop here to just put a pin in the fact that on a daily basis, Judi demands that people "go out of their way" (her words) to misspell the name "Judy." Judi has many problems, and you can never be sure which way her gavel will fall: she is pro log-o-lanterns, has come out in favor of Kevin Spacey, rather than his alleged victim, and has a lot of time for bologna. Here, she is firmly "anti" on making Halloween special for kids with dietary restrictions.

I really didn’t want to sound this nasty, but it just seems indicative of an even bigger problem. To me, the direction the world is moving in now is difficult for MANY people so as to make it easier for a FEW people.

I mean, won't someone think of the pumpkins?

The mom of four assures us that kids who have allergies or long-term disabilities will find their resilience boosted by their situations and become stronger than the “non-afflicted” if we require them to figure it out on their own. Franco would feel horrible, she says, if “a zillion families had to go out of their way to accommodate my one little kid and his one big problem.” Instead, she maintains she would teach her child to use his shortcomings to his advantage. That, Franco says, is how you “make tough kids, instead of snowflakes.”

Oh, Judi, let me tell you something: No one is required to put a teal pumpkin on their porch. They choose to do so because they want to put a smile on a kid’s face. It’s called community or, better yet, humanity. I wouldn’t expect you to understand.

Time and time again, parents remind their kids that they will most likely not be able to eat the cake at a friend’s birthday party.

You should also know this: Parents whose kids have allergies learned long ago to teach their children to set their expectations low. Time and time again, parents remind their kids that they will most likely not be able to eat the cake at a friend’s birthday party. They are the ones whose kids show up with the crappy, weird cookies at sleepovers and sit at their desks with a designated safe treat during classroom snack times. As someone who lives with celiac disease, I know for sure that most people with special diets — and those who love them — don’t expect much of anything when it comes to food options in a public situation. We often eat before dinners at friends’ houses and stash safe snacks in our purses just in case. We are that girl at the table.

Calling me or my daughter a snowflake is a neat trick to excuse your discomfort instead of doing the work to open your heart to people’s differences. It keeps you in your small, neat bubble — unaffected, but also ignorant.

But if being a snowflake means teaching my daughter to stand up for one of the many causes — racism, gender inequality, homophobia — name callers like you have assigned to people like us, then I will nurture our snowflake-ness all day long. If it means teaching her to be inclusionary by lending a shoulder to a friend with “problems” or having an option on hand for someone who can’t have the same Halloween treats as her, well, then I think us snowflakes can happily swing that, too.

More Like This
Infertility As A Stepmom Means Double The Alienation, But So Much Love
Adult Gymnastics Brought Me Back To Myself
This Mother’s Day, What I Hope For Is Resilience
Raising Us Maybe Wrecked Her Career, But My Mom Is Thriving In Her Second Act