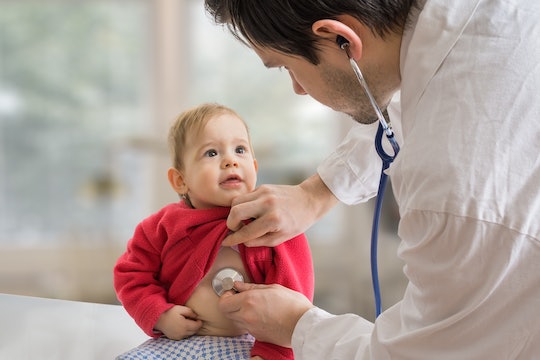 The 5 Side Effects Of Measles Can Get Pretty Scary, Honestly

As far as scary diseases are concerned, measles is near the top of the list. And although the infection itself is concerning enough, the side effects of measles are also serious, and sometimes even deadly.

First, it's helpful to understand a little more about this nasty disease. Also known as rubeola, measles is a contagious infection caused by a virus that often affects children, according to the Mayo Clinic. A high fever, runny nose, and a skin rash are some of the most common symptoms of measles, as noted in WebMD. Although this may not sound too bad, measles still kills about 100,000 people worldwide every year, most of whom are under 5 years of age, as further explained by the Mayo Clinic. It can be such a heartbreaking infection.

Thankfully, measles are well-managed by modern vaccines. In fact, two doses of the measles-mumps-rubella (MMR) vaccine are approximately 97 percent effective at preventing measles, as explained by the Centers for Disease Control and Prevention (CDC). Thanks to widespread vaccination, there are generally less than 200 cases of measles in the United States each year, according to the CDC. Travel from countries where measles are rampant is one way the infection spreads to those in the US, and unvaccinated people who carry the disease can spread it to others, including children who are too young for the MMR vaccine, as as further noted by the CDC. Although chances of your child in the US getting measles is thankfully very low, it's still wise to educate yourself about this disease and its potential side effects.