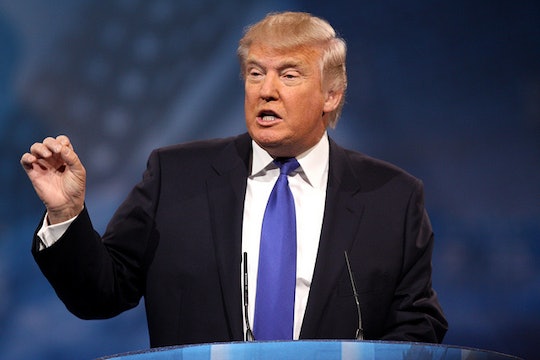 If Trump Wins The Iowa Caucus, Does He Win The Republican Nomination? The Answer Isn't So Simple

Tonight is an important night for pollsters, pundits, campaign managers, presidential hopefuls, and anyone remotely interested or affected by the United States presidential election. That's a lot of people. This evening is the start of the Iowa Caucus, which is the first time Americans will weigh in on their favorite candidates — and it's also the first time party leadership can begin to assess who should get their nomination. The big question of the night is if Trump wins the Iowa Caucus, does he win the Republican nomination?

It may seem like a no-brainer. If Trump takes home Iowa, he's showing the party that he's got the people's support, so if they want him to win the general election they should support him. However, it's not that simple. Though many Republicans already expect Donald Trump to be their nominee (as shown in these ABC News polls), he's hardly a favorite of the GOP leadership. He's a political outsider, he has little experience in the capital, and he contradicts the usual image of a Republican nominee. In short, the GOP is in a tough position. He's not one of them, but he also may be their only chance of winning the election. Even Republicans who do not necessarily agree with his politics are finding themselves rolled onto the bandwagon because they think he's the most electable. In those same ABC polls, two-thirds of Republicans or Republican-leaning independents say they would accept Donald Trump as their nominee. 56% say he's the most electable nominee.

Because of the intense media coverage and the historical view that Iowa is a sort of an election harbinger, the caucus can only add to that bandwagon effect. By repeatedly saying he's winning in the polls, he's generated his own wave of the effect already — and as The New York Times wrote in January, "everybody loves a winner." If he wins the Iowa Caucus, it's could very well mean that he'll eventually win the Republican nomination because they'll have no choice but to go with the popular vote. If he loses, it could mean a swift swing of support to another candidate.

While it seems his win in Iowa may be a done deal, with the nomination to follow shortly thereafter, do not despair, Trump-skeptics. Many Iowans have said they have not made up their minds and want to hear more about the candidates. The Los Angeles Times reported that though his candidates are diverse in their beliefs, they are not diverse in their backgrounds. Among the Republican candidates, the majority of his supporters have the least amount of education and historically have lower voter turnout. Will this affect the Iowa Caucus, the Republican nomination, and the election? Only time will tell.