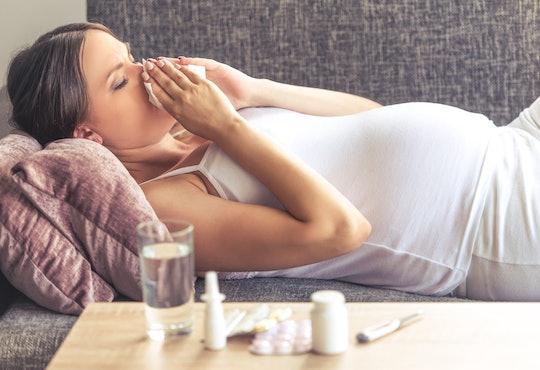 Flu Season Is Coming, & Here’s How It Could Affect Your Growing Baby

During the height of flu season, many pregnant women do everything they can to avoid getting sick. After all, keeping themselves and their baby healthy is a high priority. Plus no one wants to add flu symptoms on top of general pregnancy challenges. But if you get the flu while pregnant, will your baby get sick too? The idea of such a serious infection affecting a tiny baby is terrifying.

For starters, influenza is a viral illness that affects a person's nose, throat, and lungs, according to the Mayo Clinic. It attacks the respiratory system. This contagious infection, also known as the flu, can lead to symptoms such as fever, muscle aches, coughing, congestion, and fatigue, as further explained by the Mayo Clinic. To make matters worse, the flu is a rampant infection. In fact, between 5 to 20 percent of the U.S. population gets the flu each year, resulting in more than 30 million outpatient visits, as well as 3,000 to 49,000 deaths, according to the CDC Foundation. Ever-present during certain times of the year, the flu can have devastating health consequences.

Pregnant women make up one of the populations most vulnerable to health complications from the flu. Even if you were in the I'll-tough-it-out camp before having a baby, that resilience may no longer hold true. Because pregnancy puts a strain on the immune system, pregnant women are more susceptible to getting the flu, according to the American Pregnancy Association. Unfortunately, catching with the flu while pregnant also opens up a whole host of potential complications.

Although your developing baby may not catch the flu directly, the infection and its symptoms might lead to serious fetal health consequences. In fact, the March of Dimes noted that pneumonia, premature birth, and birth defects may be caused by the flu virus. Even common flu symptoms such as high fever can adversely affect the baby's health, leading to congenital defects, according to Healthline. Overall, the flu could have devastating health consequences for a developing baby.

To avoid this danger to the baby in utero, flu shots are recommended for pregnant women. It is the best form of protection for a developing baby. In fact, flu shots have been shown to protect both mom and baby for a time after the birthas well, according to the Centers for Disease Control and Prevention (CDC). To protect your baby in the womb and for a few months after birth, consider getting a flu shot today.