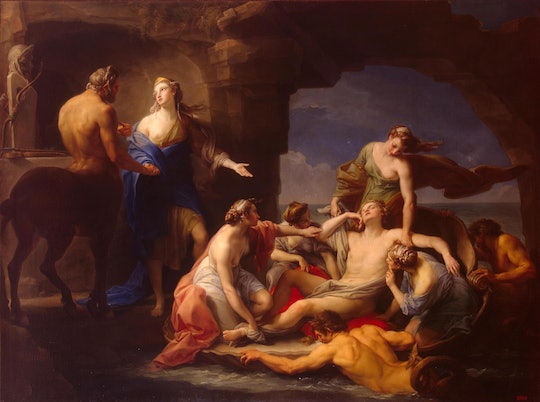 If You Think Motherhood Is Hard, Trying Being Thetis

You can’t have it all, even if you have an all-powerful dad, immortality, and charge of 50 Nereids — take it from Thetis. I’m sure every parent feels this way, but is every parent also a sea goddess and the mother of Achilles, the Greek hero who once threw a temper tantrum so great it shifted the tide of the Trojan War? No.

Kids can be hard to handle even when they aren’t a warrior of unparalleled bloodlust and ferocity. They cry a lot, they refuse to eat their vegetables, and they never want to go to bed. Still, it could be worse. I don’t know about you, but I’ll take “inexplicably covered in peanut butter” over “responsible for the deaths of thousands” any day.

All Thetis ever wanted was an evening to relax (a good book in one hand and a glass of ambrosia in the other) without Achilles standing on the shoreline going “Mom? Mom! Mo-o-o-m…” because he got into an argument with Agamemnon. She simply wanted five minutes — five minutes — to herself without one of the other gods poking their head in to say, “Uh, Thetis? It’s Achilles again. He’s killed so many Trojans that the bodies are clogging up the river Scamander. Maybe do something?” She just needed one morning to sleep in without being woken up at the crack of rosy-fingered Dawn because Achilles murdered the Trojan prince Hector and desecrated the body. Does that seem like it’s asking too much?

And talk about ungrateful. You think your kid doesn’t appreciate the things you do for them? Thetis went to all the trouble of trying to make Achilles immortal, and he still found a way to die. And die when the war was all but won! Now, given that little kids are never more than one electrical outlet away from the sweet siren call of death, it might sound tempting to follow her lead and dip your toddler into the River Styx like a French fry in ketchup, all in an effort to render them invulnerable (the ultimate act of childproofing the house). But just know that Thetis walked this road before you, and she learned that there’s only so much you can do to protect your child from danger. Eventually they’re going to touch a hot stove, or scrape up their knees on the playground, or get shot in the heel with an arrow that was guided by the god Apollo.

That’s not to say she didn’t warn him, incidentally. Time and time again, Thetis told Achilles that if he went to Troy he would never return, not unlike the way you or I might repeatedly remind little Jayden to wear a jacket to school because it’s cold outside. And what did he do? Went to Troy in search of glory, fought an army, took an arrow to the foot and died, that’s what. (Achilles, that is. Jayden likely went outside without a coat, and was likely a little chilly but mostly fine. He will continue to do this until he is 18 years old and there’s nothing you or anyone else can do about it.)

Isn’t it strange to think that you (modern-day parent, constantly wondering how much iPad time is too much iPad time) could have so much in common with Thetis (ancient water nymph, constantly trying to prevent her son from fulfilling a deadly prophecy)? Your kid sulks because you won’t let them have ice cream for breakfast; her kid sulks because Agamemnon robbed him of the spoils of war. You leave your kid with the babysitter, Zoey, who’s 14 and only knows how to make Annie’s Shells & White Cheddar Macaroni & Cheese — Thetis left Achilles with the centaur Chiron, who fed him the marrow of she-wolves. See? The two of you aren’t so different after all.

This is all to say that we all have difficult days as parents. But as much as you guys have in common, Thetis will always have it worse. At the end of the day, her son was a vindictive demigod who ended countless bloodlines, and yours is a Peppa Pig enthusiast who never eats his peas. There. Now don’t you feel better about the incorrigible little cherub of chaos that you have to try and corral into pajamas every night? (They’ll probably never slaughter even one person with a spear forged by the ash tree at Mount Pelion.)